THE STAG: Watch A Pair Of Clips From The Hilarious Irish Comedy 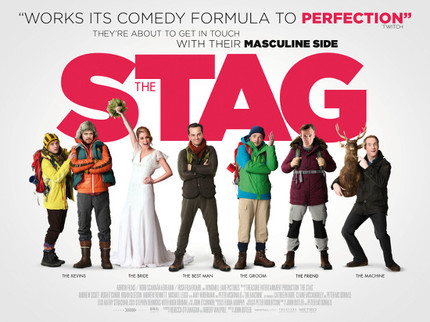 John Butler's hilarious Irish comedy The Stag hits UK screens this coming Friday and a pair of clips have just been released for your viewing pleasure. And they are very pleasurable, indeed.

Self-confessed metrosexual Fionan (Hugh O'Conor) doesn't want a Stag Do, but would happily attend the Hen. His concerned bride-to-be Ruth (Amy Huberman) persuades the marginally more macho best man Davin (Andrew Scott) to organise one. Reluctantly he agrees, while doing everything he can to stop Ruth's infamously alpha male brother, known only as 'The Machine' (Peter McDonald), gatecrashing their sober, walking-weekend, excuse for a Stag Party. Not so easily foxed, 'The Machine' tracks them down, sparking to life a wild few days in rural Ireland where the Stags find themselves lost, shot at, stoned and butt-naked. THE STAG is a hilarious and heart-warming journey of friendship, fear, male bonding, and tightly fashioned squirrel skin!

Award-winning writer/director John Butler (RTE's award winning sketch show Your Bad Self, debut novel The Tenderloin) makes his feature directing debut with this hilarious and touching comedy about male friendship - developed and co-written with actor/writer Peter McDonald (I Went Down, When Brendan Met Trudy), and produced by Rebecca O'Flanagan and Rob Walpole (The Good Man).

The first clip features Andrew Scott - you know him as Sherlock's Moriarty - trying to put The Machine off of the impending stag entirely while the second revolves around The Machine - who you may now as the father in Moone Boy - having an encounter with an electric fence. Check them out below!

Do you feel this content is inappropriate or infringes upon your rights? Click here to report it, or see our DMCA policy.
andrew scottclipjohn butlermoone boymoriartypeter mcdonaldthe stagtrailer