TIFF 2013 Review: THE STAG Works Its Comedy Formula To Perfection 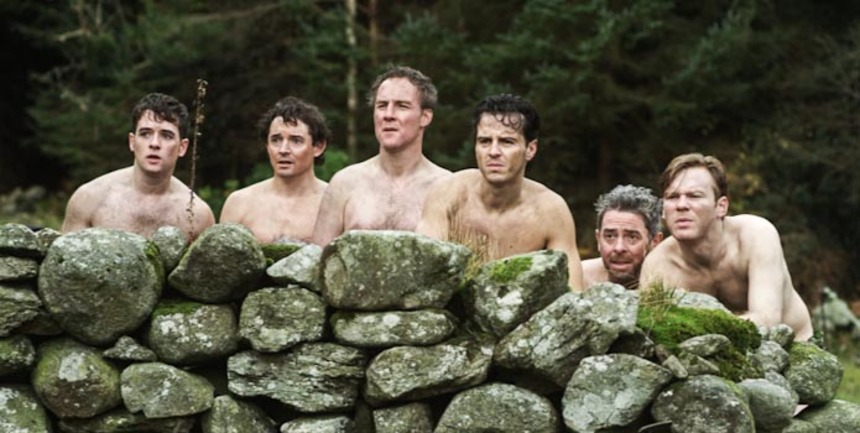 There is a commonly stated belief among film fans - particularly the sort of fans who frequent film festivals - that formula is bad. That everyone should strive for originality, should tell a story that has never been told before.

This, I must say, is a lie. It's two lies, actually. It's a lie first in that most of the people who claim they want originality actually don't, and will sputter in indignation when confronted with something truly new and original because it defies their expectations. In my experience, when people say they want something new, what they really mean is they want something only seventy percent familiar rather than the customary eighty percent. And it is also a lie in that it is somehow inferior to embrace convention or work a familiar story. What matters is how well you tell it and how much personality you can build in. And, make no mistake about it: John Butler's The Stag works very familiar territory with no particular surprises along the way, but it does so very, very well and with heaps of personality. Crowd pleaser? You're looking at one right here.

Fionnan is getting married. He's found his woman in Ruth and he's determined to make her day perfect. So determined that he's driving the wedding planner mad with his obsessive attention to detail and penchant for creating dioramas. Something must be done and that thing, Ruth decides, is for Fionnan's bookish best man, Davin, to organize a weekend away - a camping trip as a stag party - and get Fionnan out of all of their hair.

You can already see where it's going, can't you? The group assembled is an odd bunch, and ill suited to the out doors. There's Fionnan's gay brother and his partner - both named Kevin - there's their web coding friend, Simon. There's the extra baggage Davin is packing in the form of his unrequited love for Ruth. There's Simon's impending financial collapse. There are the Kevin's having to come to terms with Fionnan's father's homophobia. And, oh yes, there's also The Machine. The what? That would be Ruth's wild man of a brother, a complete loose cannon who the group attempts unsuccessfully to ditch and who may very well lead them all to their deaths.

When done correctly there's a comforting element to formula, the sure knowledge that something is coming and the satisfaction of being right when it does, all of it being elevated when it turns out that the filmmakers give you what you want, along with enough verve that it still feels fresh. And that is what The Stag does in spades. You know what's coming right from the outset but it's delivered so well that it brings with it the satisfaction of a laugh well timed and the appreciation of simple craft. The stellar cast is a huge factor in the success, with a huge nod going in the direction of Andrew Scott (you know him as Moriarty on Sherlock) as Davin. An even bigger nod, however, goes to Peter McDonald who does double duty as both screenwriter and charismatic madman The Machine. And it is, it should be noted, very much THE Machine. He's never once referred to as just 'Machine'. McDonald owns every frame he's in - which is most - with a hysterically funny and surprisingly nuanced performance.

Does The Stag reinvent the wheel? No, but it's not trying to, and sometimes all you need is a smooth ride.
Tweet Post Submit

Do you feel this content is inappropriate or infringes upon your rights? Click here to report it, or see our DMCA policy.
Andrew scottJohn butlerPeter McDonaldreviewThe stagTIFF 2013