Take To The Skies With The Trailer For DOCTOR PROCTOR'S FART POWDER! 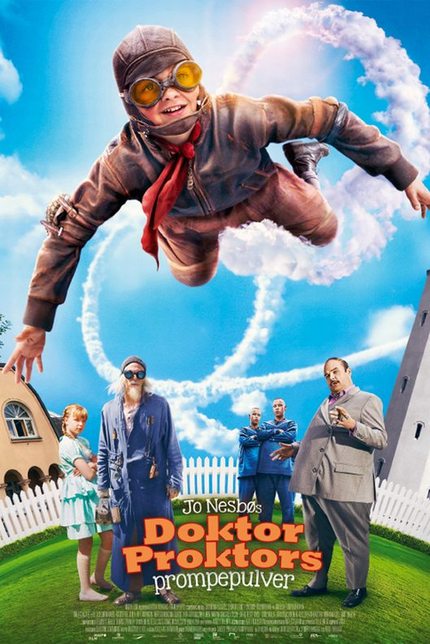 Yes, Arild Frohlich's adaptation of Jo Nesbo's hugely popular children's book Doctor Proctor's Fart Powder hits Norwegian screens very soon and after a mock ad for the good Doctor's marquee product and a string of images from production the full trailer for the film has arrived, with English subtitles included.

How far can a successful fart get you? Will it only lead to a good laugh, or could you possibly gain international recognition?

The somewhat insane Doctor Proctor has accidentally invented the world's most powerful fart powder. When two kids from his neighborhood drop by for an unexpected visit, it becomes the beginning of an unusual friendship and a riotous business project. Well-behaved Lisa with her pigtails and tiny Nilly with his bright red hair decide to help introduce Doctor Proctor's fart powder to the world. But this turns out to be an adventure fraught with danger, as the wealthy and evil Mr. Thrane and his two creepy sons are willing to do anything to get their hands on the fart powder.

The comedy Doctor Proctor's Fart Powder is a modern-day fairy tale set in a world where the most normal adult is a mad professor, where animals you wish didn't exist lurk in the sewer, and where the farts are powerful enough to launch you into outer space.

Director Frohlich first came to our attention with the raunchy (and fantastic) comedy Fatso and while this is very clearly aimed at a different audience it still boasts his signature visual style. Take a look below.