SXSW: Take A First Look At Fabulous Poster Art For THE MULE 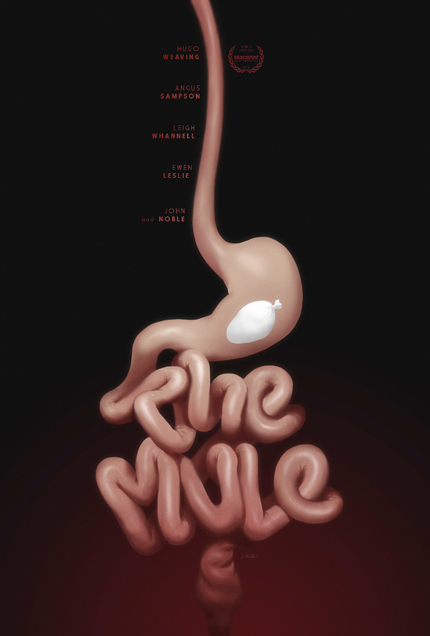 Though the year is still young, here's one thing we already know about 2014: It's the year we throw out everything we thought we know about Leigh Whannell. It's perfectly understandable that people thought they had the Australian talent figured out ... I mean, as the writer of both Saw and Insidious he's clearly a horror guy through and through, right? Well, yeah. Sort of. But it is becoming increasingly clear that writing horror is only one small bit of what Whannell is about and he's pushing ever more aggressively into other pastures. Take Sundance selection Cooties, for example, which Whannell co-wrote and co-stars in. And, yes, there's a horror element there but it's Whannell's comic performance on screen that'll stick with you the longest.

And now a couple months later we're in to SXSW and Whannell is pushing his personal envelope again as co-writer and co-star of The Mule, a dark comedy written by Whannell with prolific actor turned director Angus Sampson (you know him as ghost hunter Tucker in the Insidious films) with Hugo Weaving in the lead.

It's 1983. A naive man with lethal narcotics hidden in his stomach is detained by Australian Federal Police. Alone and afraid, 'the Mule' makes a desperate choice; to defy his bodily functions and withhold the evidence...literally. And by doing so becomes a 'human time-bomb'; dragging cops, criminals and concerned family into his impossible escapade. Inspired by true events, THE MULE is directed by Angus Sampson and Tony Mahony, with a darkly comic screenplay by Sampson, Leigh Whannell (Saw, Insidious), and Jaime Browne. The film stars Hugo Weaving alongside Sampson and Whannell with an ensemble cast including Ewen Leslie, Geoff Morrell, Georgina Haig, Noni Hazlehurst and John Noble. Sales are handled by Paradigm and eOne Films International.

SXSW presents a compelling lineup this year with the Midnight lineup providing a cornucopia of hotly anticipated titles for genre hounds. But mark my words ... I think this is going to be a year where we see some genre oriented breakout sleeper titles make as big a splash out of other sections as anything in Midnight. And I expect The Mule and New Zealand effort Housebound to lead that particular charge. Should be a fun year.

Do you feel this content is inappropriate or infringes upon your rights? Click here to report it, or see our DMCA policy.
angus sampsonhugo weavingleigh whannellpostersxswthe mule