SXSW 2014 Review: THAT GUY DICK MILLER Shines A Light In The Shadows Of American Cinema 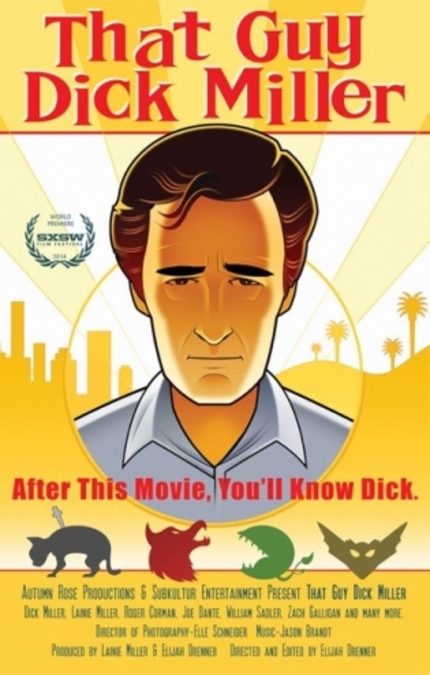 Most film fans know the face, but very few know the name. Dick Miller is one of those guys we see in film after film, completely inhabiting the characters he's given for whatever brief amount of screen time he has. That Guy Dick Miller takes a look at the career and personal life of a man you've seen a million times, but can never quite remember his name.

I will admit, up until two or three years ago, Dick Miller was an actor I didn't know by name. He was Mr. Futterman in Gremlins, one of the dodgy actors in Matinee, and any number of security guards, store clerks, police officers, and petty crooks in hundreds of films since the '50s. The guy may not have the face of a matinee idol, but he certainly has always had the chops to make his few minutes on camera memorable. Any film featuring an appearance by Dick Miller was fortunate, and that appearance was quite often a highlight of the film. American Grindhouse director Elijah Drenner finally gives the man his due in an entertaining and endearing exploration of the man with that great face.

Drenner's project began life, as so many do these days, as an idea thrown to the mercy of crowdfunding. We at ScreenAnarchy actually helped to pitch That Guy Dick Miller over a year and a half ago, and it's nothing if not gratifying to see it as a finished feature. Drenner gathers a rather impressive collection of famous faces, Miller's contemporaries in the world of Roger Corman, and personal friends and family to make this film a well-rounded look at a man who deserves no less. We see his career, as well as his family life, personal life, and the balanced dichotomy between his passion for the art of acting, and his dedication to working his ass off to make ends meet.

From Miller's beginnings in Roger Corman's stock company and apex as the lead in A Bucket of Blood, the iconic anti-hipster Walter Paisley, to his reappearance as a member of Joe Dante's stock company in the '80s and '90s, the actor has been a constant in the world of cinema for over 50 years now. Memorable but small parts in An American Werewolf in London, The Terminator, Gremlins, and Night of the Creeps, have made Miller one of the great household faces, like Harry Dean Stanton, that everyone just knows. However, Drenner does a great job of showing the human and humorous side of Miller that you don't see in the movies.

That Guy Dick Miller is a great look at a man to whom any child of the '50s, '60s, '70s, or '80s owes more memories than we can probably count. Through a combination of personal interviews with people like Roger Corman (who is ever effusive about Miller's ability to help him make a buck), Joe Dante, and even Corey Feldman, and some choice b-roll footage, including a memorable piece from The 'Burbs in which Miller tells a visibly stoned Feldman to "shut the fuck up," the documentary gives us a deeper look at a man who was all about the work and staying a working stiff as long as he can, it just turns out that he's better at it than most.

More about That Guy Dick Miller