Review: MUPPETS MOST WANTED, A Sequel That Delivers What Fans Want

It was halfway through a press conference this week that someone asked the talent propped up at the front of the assembled media about the inconsistencies that one can find between the various tales that have served as the eight Muppet theatrical films and various other feature-length projects. Putting her hand over her eyes, growling an "oh, brother...", she looked out with a piercing expression at the person who had asked the inane question and chided, "It's a MOVIE!".

She clearly wanted to divorce the comings-and-goings of real life from travails of their on-screen hijinks. It was an entirely believable response, and I admit, for more than a minute, I forgot I was hearing these words from a bundle of felt and fake hair, an extension of the arm of some guy hiding beneath a curtained-off table.

Miss Piggy, as expected, takes no shit from nobody.

It's perhaps no surprise that I can so readily succumb to the ontology of Muppetdom, given that as a child of the early 70s I was literally raised by puppeteered creatures performed by Henson & co. There's something so fundamental about the images of Kermit and his compatriots, something more foundational and (dare I say it?) pure about our collective relationship to these characters. I don't believe it's a question of mere nostalgia, I do genuinely believe that these characters work on a level that few aspects of popular culture manage to do, regardless of at what age you connect with them.

The previous Muppet film couched on this good will, echoing overtly the first film in the series. Muppets Most Wanted picks up literally seconds after the previous film ends (the fireworks spelling out the conclusion still drifting earthward), as the characters come to terms with their need to now put on a show. They sing another catchy tune sculpted by (Oscar winning!) Brett McKenzie about how sequels never live up to the previous films, and that by their nature they're likely to be seen as inferior by critics and audiences alike, wanting more of the same yet equally wanting something new and fresh. 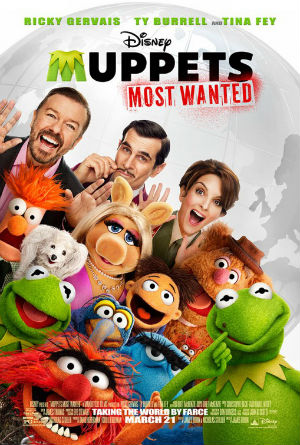 It's to the film's credit that this self-reflexivity never feels forced or obnoxious. If The Muppets was a film about, well, our love and fascination with these creations, then Muppets Most Wanted really is the attempt (much like the second film, The Great Muppet Caper) to extend these characters into something resembling a plot, not just an excuse to get the group back together.

It's no real fault of the film, but Disney has been showing huge chunks of the movie through various teases and trailers, ruining more than a few good jokes through repetition. The main story involves a series of heists being committed by "the world's most dangerous frog", Constantine. A dead ringer for Kermit - save for a mole, a thick Russian accent, and a more pointy "bib" - Constantine, along with his "number two", played by Rickey Gervais, manages to convince the other Muppets he's Kermit, while Kermit himself is cooped up in a Gulag run by Tina Fey.

There are jokes about lazy Frenchmen and the murderous nature of Danny Trejo, and the whole thing kind of plays as an extended skit, with jokes and songs thrown in along the way. It's a brisk film, and a pretty damn entertaining one as well. The music is good, if not quite working on the level of the previous film, and for some reason it feels a bit more like it's forced into the narrative. Still, there are bravado moments of musical theatre (including an exquisite take on A Chorus Line) that ups the preposterous level to satisfying heights.

Overall, you're getting more of the same, but it's a film that knows it's more of the same, and plays with that fact. It constantly is teasing at what's being presented, undermining its own plot with post-modern asides. This irreverence was always at the heart of what the Muppet Show would provide, a "taking the piss" attitude that cuts through even this highly corporate studio picture. It's not like the Muppets are being politically adventurous, but there's still a gleam in the ping-pong eyes of Kermit and his cohorts that speaks to the anti-establishment origins of their brand of humour. 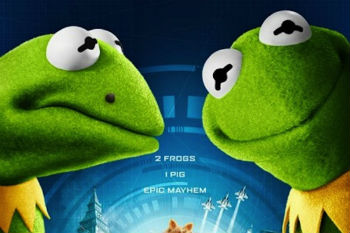 The performances are as extraordinary as expected, and Matt Vogel's Constantine, as a contrast to Steve Whitmire's Kermit, is the star of the show. By merely tucking his fingers in, by having the character walk in a more stilted way, we immediately see an different take of the iconic frog, buying completely the notion that this is indeed a most dangerous amphibian. In the same way that it's preposterous that the other Muppets don't recognize the deception, we as an audience quickly forget that what we're seeing is itself an illusion that we quickly embrace.

Doctor Honeydew is right, this is the seventh sequel in the series, and despite this fact, it still feels pretty fresh. The film in many ways is more stand-alone than the previous (which was, unabashedly, a love-fest for the characters), and as such it has a bit more heavy lifting to do in the story department. As such, it doesn't quite have the same sense of relief that one felt when you were watching the previous film, a sense that that they'd managed to rescue these characters for a new generation.

Still, there's plenty to love about this film, and it's told with respect for the traditions while forging ahead.

I'm not entirely sure what we need or expect from a continuing tale of a bunch of Muppets getting up to trouble, save for a bit of adventure, a bunch of cameos, some catchy song-and-dance numbers and some groan-worthy jokes. This is the stuff that's most wanted about Muppets Most Wanted, and I'm pleased to say that this eighth theatrical Muppet movie delivers on that promise.
The film opens wide in theatres across North America on Friday, March 21.

More about Muppets Most Wanted