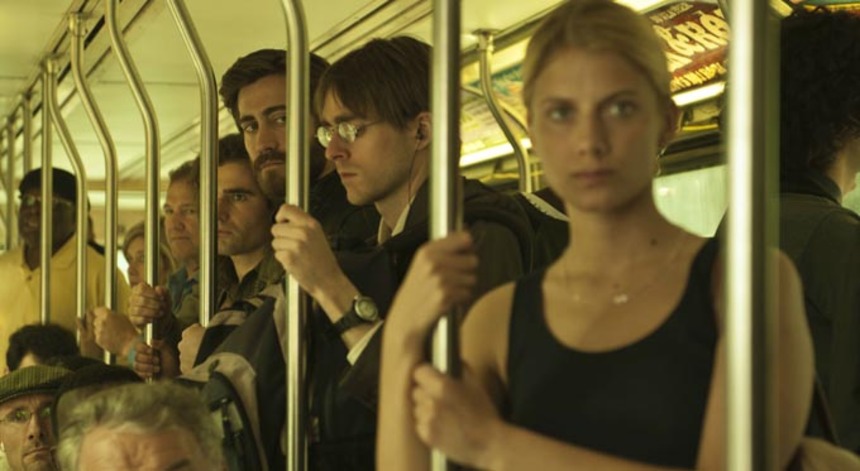 With film, things often come in pairs. Sometimes the doubles are explicit; some studio vying with another for a given plot, be it a tale of animated insects or impending asteroid impacts. Sometimes, the twinning takes the form of accidental synergy; say the back-to-back S&M Asian romps of Moebius and R100 that I experienced earlier this week.

TIFF brought out a couple more shared connections. Canadian director Denis Villeneuve, whose previous, shattering work Incendies vied for an Oscar, had two films at this year's fest. The first, Prisoners (read Ryland's review) is a big budget, big studio, big concept thriller, showing to a mainstream audience the director's craft. Enemy is a much more subdued affair, yet also shares a key performer in the form of Jake Gyllenhaal.

An entirely different film, Richard Aoyade's The Double (read Todd's review) also screened at this fest, and in its own way deals with notions of identity confusion. Consider it a mild spoiler, but Enemy is based on a Portuguese novel by José Saramago titled in English "The Double," thus sharing, perhaps coincidentally, perhaps because of the zeitgeist, yet another intriguing connection.

At its best, Enemy plays with these connections -- the overt or implicit doublings that we confront. Reading a summary of the original novel, it's clear that Villeneuve and his screenwriter Javier Gullón have stripped the film from its more overt moments. Instead, we're left with a highly stylized yet intriguing look at a man coming to terms with his duplicate and the actions and passions that arise from this situation.

Enemy also joins yet another film from this year's fest, The F Word (now titled What If), shot by another Montréal director, in the way that Villeneuve shoots Toronto. Combined, these two films give entirely unique and refreshingly original takes on this city. If The F Word finally shows the diversity of our communities and neighbourhoods, Enemy makes it look like a bombed out hellscape. The Scarborough campus of the University of Toronto's concrete curves look like some wretched near-future; its towering condos lifeless and banal. The Toronto of Enemy is a city of glass and stone, of highways and construction, all shot through a diaphanous mist. Never has my home town look less inviting; less like the image it likes to present of itself.

Gylenhaal does admirable work keeping things straight in the convoluted plot and as things drift to their inevitable confrontations, the mood is sustained without too much in the way of pedantry. Co-stars Mélanie Laurent and Sarah Gadon are appropriately icy; almost Hitchcockian in their blond coldness. The great Isabella Rossellini makes a brief but welcome appearance, yet the film really does rest on Gyllenhaal's shoulders.

It's clear that there are loads of literary elements in the narrative that we are left to wonder about. Surreal moments are left to linger; arachnid horrors merely imply at deeper fears. Still, for some reason, these esoteric moments mesh with the mood. While it might not all make sense for those of us that haven't read the book, it all seems kind of enjoyable during the running time.

This may be the less celebrated of Villeneuve's achievements at this year's festival, but in some ways, it may be the most interesting. At the very least, it's another example of the dexterity of this filmmaker; each work very much as unique and different as the two characters. If it wasn't already clear from his earlier work, Enemy firmly establishes Villeneuve as one of today's most truly unique filmmakers.
This review originally ran as part of ScreenAnarchy coverage of TIFF 2013. Enemy opens in limited release March 14, 2014.