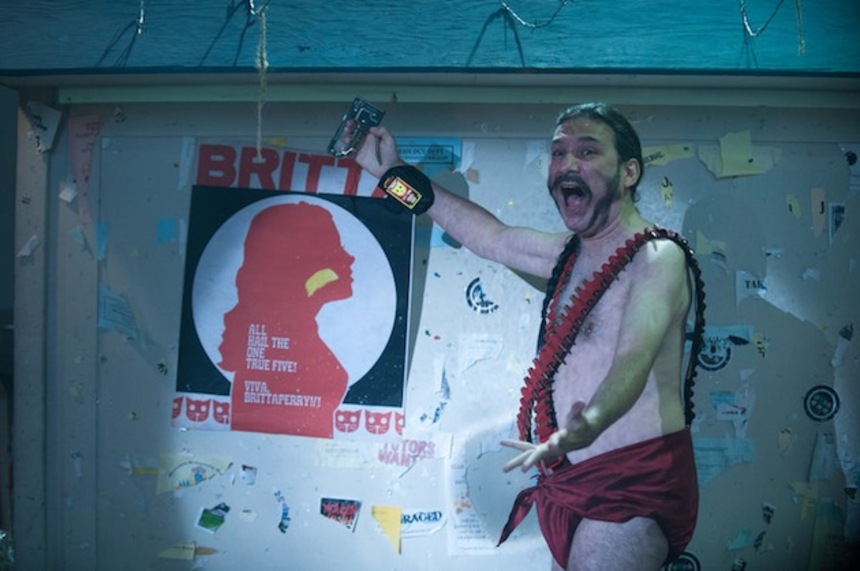 I've spent a good few minutes typing and retyping more informed, humorous and/or clever openings to this review, only to come back to this conclusion: Last night's Community was an episode that featured one of the show's always interesting experiments in homage, but it was  one experiment that didn't fully land. That is if you can say experiments land or not.

In large measure that's because "App Development And Condiments" started with something more personal and intimate, an emotional rift between Jeff and Shirley, which is now a classic go-to for the characters. Though the ending has some real meaning for the two, the actual story which gets them there goes on and off the rails so many times that it was merely close to, but never quite a disaster, and yet always amusing.

Franky, this is as close as Dan Harmon-led Community can get to paint by the numbers. Which is probably less a knock and more a testament to just how good the show remains (and proves my feelings that much of Harmon's wacky powers came into alignment many years ago during his Channel 101 Laser Fart series)

We start at the end of a Save Greendale committee meeting, which is going, well... it's going. Jeff is having the gang over for dinner while Shirley has to go to her son's karate class. Both Jeff and Shirley accept the way things are, while the others "awww" their way to the point where Shirley gets to her passive-aggressive self. Which means it is perfect timing for the Dean to introduce Greendale to a beta test of a new social media app called MeowMeowBeenz, which has nothing to do with cats or beans (or beenz), of course. It is a popularity meter where you can rate teachers and students and vice versa, and you know it's going to be a disaster. It all really helps that the app developers are played by the perfectly awkward, seemingly incompetent, Steve Agee and Brian Posehn, two veteran comedians who, if you ask me, are  pinnacle examples for comedy-nerd appropriate Community guest roles... which is to say about time! (Then again, there are four other guest roles tonight that would beg to differ)

By the end of day one of the beta test, Britta is a 1, while Shirley has quickly become the queen bee of 5s as she's soooo nice. Jeff is ready to prove just how rotten of a system this is. A week into the beta test, and true to wacky form, we've gone full on dystopic at Greendale. While the show has edged this ground numerous times before, this episode is a direct homage to many a Sci-fi flick from the 70s, most notably Zardoz and Logan's Run, and of course there's a bit of H.G. Welles style future from The Time Machine, and a number of things I probably don't really get because I only have so much geek cred, sorry. It's all rather clever and amusing in a passable way. Shirley, Abed, Hickey, Chang and a 40-something student and professional party animal named Koogler (played wonderfully silly by Arrested Development creator Mitch Hurwitz) reign as 5s, glorious beings robed in white, while Jeff plots his way as a 4, and Britta is a utilitarian-like 2 in janitorial beige.

To keep the plot moving, there's actually a lot of trip ups in the joke department. So much of what works or doesn't will rely on your knowledge of dystopic satires or how much you enjoy seeing comedians Tim Heidecker, Eric Wareheim, and Jen Kirkman as disco-angel stylized 4s. Jeff makes it to the 5s by doing some blatantly lowest-common denominator stand-up in a 5 sanctioned talent show. Meanwhile, Britta starts a revolution, which will only be taken seriously when she has mustard smeared on her cheek. Jeff and Shirley bicker their way into 1 status, the revolution happens, but nothing changes the power and popularity model, and then Jeff makes one of his patented little speeches which is just to say the app has gone public, now let's delete it.

In some ways it's all a little much ado about nothing, as it feels the show has handled the Jeff/Shirley friendly rivalry much more solidly in the past. And again, it's a little deja-vu on the homage front, as it's quite soon after the Mad Max-esque Lava game episode, which while a little rocky at times, did a much better job of tying the character stuff (Troy's departure and Abed's inability to deal with it) into the grander genre escapades.

The best bits are without a doubt the guest players, especially Hurwitz as Koogler who gets an Animal House-style trailer as the show's tag.

As it goes "App Development And Condiments" is a serviceable episode merely because it goes so deep in the well of Community emotional tropes, as to then feel a little lazy in execution. It means well, but it also doesn't help that the basic dystopic ideas it homages and satirizes have been so overly homaged and satirized already as prerequisites for dystopic fiction anyway as to feel stale... if cute in a way. So yes, I'm see-sawing a lot here... was it "meh" or "eh"... and when Community goes that route is it really all so bad considering how this show takes risks others would never even dare of in their entire runs? Am I really playing the "mediocre Community is better than most TV" card? I guess I am. I'm okay with that for now. I'm just not all that enthused to elaborate or really worry about it.

Or else I am merely masking the fact that I am terrified that the show is behaving more like a sitcom of old in that it gives its characters development one week and then puts them back to their status quo the next just so a joke can work. Or maybe that is the whole joke. Or maybe, like I've said before we, as people, get stuck and repeat and float, and... the show will go on. And I am fairly sure my enthusiasm will rise again. Maybe I should just take a lesson from Koogler and... assume the party!