Hooray For Hollywood! No, Hollywood Did Not "Steal" Your Script 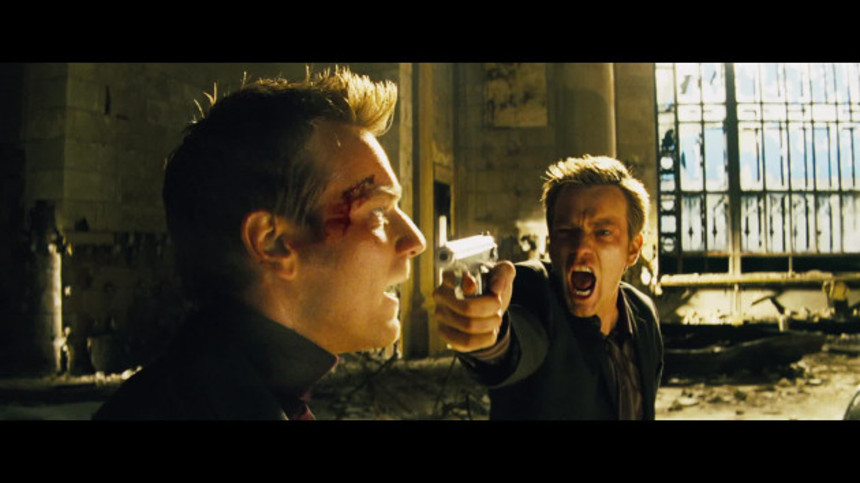 I just returned home from a film festival where I was asked one of the most amazing questions, I think, ever.

After sitting on a panel discussing the growing nexus between short-films and Hollywood, this young man -- early to mid 20s -- approached me and wanted to know if he could ask me a question.

"Sure!" I replied, never for a second imagining what I would hear next:

"So, I have this great script but I don't want anyone to steal it -- how do I sell it without showing it to anyone?"

If you're anything like me, the "needle" of your brain-record just scratched across the surface to a dead-stop.

He repeated his question, just as he had asked it initially.

I could tell he was neither crazy nor kidding so I tried to better define what exactly he meant by not "showing it to anyone".

"You mean you want to pitch the script and then have someone pay you to 'write' it?"

He shook his head. "No, I don't think I'd trust anyone to hear the idea even and not steal it."

"Oh... Okay. So, you really DO want to know how to get a producer or studio to buy your script unread, unseen, without really telling them what it's about. At all."

He nodded, relieved -- I finally got it.

I went on to explain that nobody, not even in the go-go spec days of yesteryear, would buy a script or idea truly, TRULY blindly.

An idea on a napkin? Sure.

A one-page paragraph? Sign me up, four million dollars.

Only M. Night Shyamalan gets to sell nothing, but even he has to turn in a script first.

Deeply fascinated by his paranoia, I invited him back to the fest's VIP lounge to continue the discussion -- figured, let the fest buy us some drinks and give me fodder for a column.

Over the next forty-five minutes, what I came to understand is this: Hollywood has an image problem.

My flyover-friend had been convinced that the town was loaded with self-obsessed credit-whores eager to read his script and steal it without so much as a how-do-you-do.

I told him that I don't know anyone "eager" to read a script unless their life literally depended on it, fewer still who would steal one for a project (which left him one-third correct).

"But what about Avatar?" he asked.

What about it? James Cameron wrote it, has been sued by multiple people and keeps winning the lawsuits. Why? Because he didn't steal anybody's script.

(I can hear you coughing about "Demon With A Glass Hand" out there. Fair enough.)

"What about The Expendables?"

That was a Writers Guild credit issue.

"Okay," he relented (almost), " but you can't deny Coming To America."

This near-hysterical concern about script theft was based on a 25-year old Art Buchwald lawsuit?

Let me tell you about Coming To America:

Paramount optioned Buchwald's treatment (it was called something else, King For A Day, maybe?), developed it with Eddie Murphy and John Landis to no avail, and when the option expired and Art took it to another studio, they went ahead with a project that had some similar bones to it.

That wasn't their problem.

Combine those bones WITH Eddie Murphy and WITH John Landis and WITH the same studio execs and what jury of their peers was going to believe the two projects weren't born from the same original DNA?

That was their problem.

(Well, that and the fact that Eddie's "original" idea was, in all likelihood, subconsciously influenced by his time around the Buchwald treatment.)

In any case, the question of authorship -- while worth a look at in court -- was really secondary to Buchwald's distaste for the "studio accounting régime" and his desire to expose it to some disinfecting light.

When the studio claimed that a film that cost around $40 million and had made nearly $300 million worldwide was still in the red, the court deemed its contractual profit formulas "unconscionable" and drove Paramount to settle instead of risking -- should they have lost an appeal -- the setting of a precedent against studio accounting practices at the Superior Court level.

So, DID Paramount "steal" Buchwald's treatment?

In addition to some profound differences structurally, the two projects were vastly different tonally, as different as Pretty Woman was from its original version, the script $3000. Had Murphy and Landis been two other people, I don't see a suit that would have been allowed to go forward.

But all of that doesn't answer, really, the question my Fest Friend was asking: "Will Hollywood steal my script?"

Out in the wilds on the periphery? Maybe.

At a real, professional level? I suppose it could happen but I really doubt it would. For a couple of reasons.

To start with, I was disabused of my natural suspicions years and years ago when I saw, first-hand, the powerful process referred to as "parallel development".

And, no, that isn't when a studio secretly hires multiple writers on the same project to see who turns in the best version (though that does, on occasion, happen).

It's when two projects that seem close enough to be conjoined erupt into existence from the creative ether independently of -- but synchronized with -- one another.

There are a lot of reasons why this happens : a star or director is looking for a project like "X" and everyone beats the bushes to find it; something in the zeitgeist inspires two or more writers into a spec binge; or -- most often -- just 'cuz.

When it boils right down to it, there aren't that many stories to tell.

The difference is in the telling and, although all creators and their specific circumstances are unique, the greatest swath of them share, ultimately, a similar (some, myself included, might say "too similar") point-of-origin on this planet and, therefore, a similar point-of-view.

My first run-in with the truism of parallel development was this:

After the first chapter of The Fast And The Furious franchise came out and quintupled its budget in box office, an old project of mine picked up some steam at the studio. The challenge at the time was a rival studio wanted to put a similar project into production. Each studio was waiting for the other to blink, no one wanting another Armageddon vs. Deep Impact situation.

The rewrite race was on. My job -- as was that of my counterpart at the other studio -- was to take four weeks and turn in a rewrite that would cement our director and land a star.

We both did our rewrites.

We turned them in to our studios on the exact same day.

Both rewrites, I sh*t you not, had brand new scenes that had skin-divers riding whale-sharks in order to escape drug-smuggling Aztec warriors.

(well, I sh*t you a little -- those aren't the ACTUAL details, but they are just as specific and, one would think, unique as the ones we two writers had independently created for our respective projects during the same four-week period.)

After that eye-opener, I stopped worrying quite so much about being ripped off and decided to focus instead -- exclusively -- on just writing and getting it out there.

The second reason I doubt much wholesale theft of scripts occurs is this: it's a waste of time.

If your script is good, the easiest thing to do is make a deal with you. Chances are you aren't in the Writers Guild yet, so it's also the cheapest thing one can do. If a producer doesn't have the funds to purchase the script themselves, they can certainly hammer out an option agreement which leaves them free-and-clear to (A) shop your script around; and/or (B) hire someone better than you to rewrite it.

And that's really the underlying truth that no one wants to hear:

With Hollywood, you may think that it's all about the "idea"?

It's all about the execution of it.

You will, understandably, want to think: "They f'n ripped me off!"

The truth, however, is more likely this:

Someone else had the same idea you had but their execution of it was superior to yours.

Yes, there are myriad lawsuits every year by writers against producers and studios and, yes, many of those lawsuits are settled. They are settled for the same reason supermarkets settle thousands of "slip and fall" cases where no one slips and no one falls: because while it is kith and kin to extortion, it is, ultimately, just a cost of doing business and the cost of settling is less than the cost of fighting and winning.

Does this mean anyone out there with a story to tell needs to wander the wilds of Hollywood unprotected and hoping that they avoid the I.P. brigands? Of course not.

To them, let me start by giving the same advice I gave to my young Fest Friend:

First: always register your script (or manuscript) with the US Copyright office.

Registering your script with the WGA is a fine back-up but, should an actual litigious situation ever arise, my understanding from all the lawyers I have had in my career is that Guild registration alone will leave you exposed in a number of ways (ability to get payment for legal fees, compensatory damages, etc).

When you seemingly pluck a good idea out of the ether, check yourself, fool.

This isn't happenstance, this is a visiting from the Muse. Respect it.

Respect it by getting it out of your head and down on paper as quickly as possible.

I know this because, historically, my Muse has been kind of a slut, handing out "my" good ideas to a bunch of writers at once and when I've delayed, I've been burned.

There are no original ideas, only original ways to tell them.

If you hesitate on doing that, someone WILL beat you to it.

Third: the real value of any script is to give you entre for the next.

Hollywood, like life, is often a numbers game. 15,000 "new" feature scripts registered each year, 40 of them bought by studios/financiers, 2 of them (maybe/eventually) produced.

Chances are your script is NOT going to sell. And, if it does, it is probably not getting made. But it will let you bring the next one in to producers and studios a little easier, a little quicker, and with a little more interest in it.

So, given that, don't worry about your scripts getting out there, potentially stolen. As I told you, I don't really think it's likely to happen.

Should you somehow manage to come up with an original idea, though, better keep that to yourself.

If Hollywood doesn't steal it from you, I might...

Hooray For Hollywood! is a column on the business practices, philosophies, and mechanics of the Hollywood studio system, written by an industry professional with first-hand experience.