Destroy All Monsters: Fighting and Fucking in 300: RISE OF AN EMPIRE 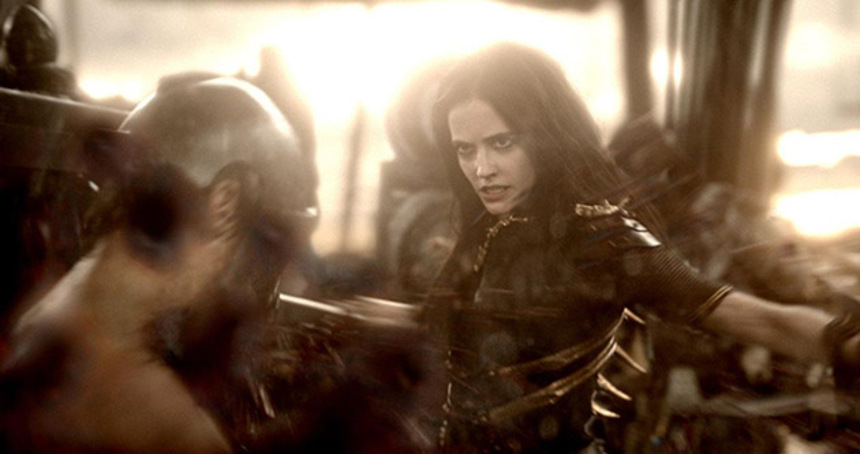 On International Women's Day, my girlfriend took me to see 300: Rise of an Empire. She liked the original 300 movie a lot more than I did (I didn't), but she's my girlfriend and I love her, and naturally I ended up liking 300 2 more than she did. This is the value of expectations.

Granted, Rise of An Empire never crosses over into the realm of actually being good, at least not in any definable sense of the term. Pretty much everything, though, that I didn't like about the first 300 movie - the melted-plastic intangibility of the images, the ridiculous man-Man-MAN-ness of the characters/icons - was rewired sufficiently to make them effective, or at least, interesting enough to keep me in the game.

I enjoy a woven story, which is what Rise of an Empire is. It ducks in and around the vestigial events of 300 - adding absolutely nothing of thematic or narrative weight to them, of course, because that would probably just give the fans a headache - but developing the larger political context behind King Leonidas' actions in the other movie. "Larger political context" is a fancy way of saying "meanwhile," but I was surprised at how much I enjoyed watching the movie connect its own dots.

It's all historical nonsense, of course, but anyone who attends a 300 movie expecting a halfway-accurate history lesson is going to get what they pay for, and I'd argue that the movie doesn't even attempt to disguise the fact that it's completely made up. Just look at the thing. There isn't a single frame of 300 or Rise of an Empire that look like they take place on anything resembling the planet Earth; if the movie was called World War Hulk (and I hope, someday, it will be), the history purists wouldn't have anything to complain about. Nor should they. History is still back there, as debatably unreliable as it's ever been.

The onscreen visuals in Rise of an Empire were just as greased up and ridiculous as Zack Snyder's CGI-hefty efforts the first time around, but there was an appreciable improvement in the overall command of craft. (This is reasonable enough, given that it's seven years later, and visual effects solidity seems to adhere to a corollary of Moore's Law.) Much of the warfare is at sea this time around, and even though the action sequences are complete poppycock - at least in terms of what one could theoretically accomplish in wooden-boat warfare in open water in the pre-Common Era Mediterranean - it looks fantastic.

Arrows were involved. I like arrow-related battle scenes. Early in the film, our hero - Themistocles, played by an actor who probably doesn't even know his own name, based on how completely anonymous he remains in my consciousness - takes out the king of Persia with one of those Zartan vs. Serpentor / Bronn on the Blackwater long shots that have made my heart sing since I was a small boy. Having nocked an arrow or two in my time, I don't know how credible the idea of shooting down a monarch at 500 yards across a body of water is; but hey, it looks cool - and, nearly, balletic - to watch.

This assassination, of course, augurs ill for the Greeks, as it raises the understandable ire of the king's son - Xerxes, whom you might remember from the first movie, and who is still played by Paulo from Lost - who proceeds to dip himself in gold paint and/or magical water and become a 9-foot-tall super-monster. Except, he's also kind of a wimp; at least in that we never actually see him fight anyone, or do anything other than loll on his royal divan and (seemingly) contemplate how fabulous his giant gold cock must be, underneath his tiny gold dance belt.

The fighting, instead, is left to the king's sort-of-adopted sort-of-daughter, Artemisia, who commands Persia's navy in a duel of wits against Themistocles and his boats, and is played right down into the deckboards by Eva Green.

Artemisia, as befits a movie with a wholly male point of view, is a female Greek turncoat who watched other Greeks rape her family to death right in front of her before finding herself sold into child prostitution so that she could get raped some more, before emerging - as one would, in this kind of justification system - as an adult with a deeply rooted interest in helping Persia destroy Greece; and, conveniently, a combat skill set that extends from complex battle strategy to single-blade swordfighting, all of which she is fundamentally outstanding at.

She shouldn't have fascinated me, but she did. She's a bag of cheap tricks as a character, and pruriently sexist, misogynist tricks at that; but there's such a thoroughbred honesty to the lady baddie as written - and, thankfully, as played by Green, who has no illusions whatsoever about what kind of ridiculous monster she's being asked to put onscreen - that I found Artemisia weirdly refreshing.

In her first major scene, she beheads a man and makes out with his still-bloody headmeat, just to prove that she's, I don't know, crazy and driven by berserk sexual lusts. Maybe, in Rise of an Empire's view of things, those two elements are one and the same. The question can certainly be raised in the movie's centerpiece scene (well, for me anyway), where Artemisia invites Themistocles onto her ship to negotiate before their big battle - and proceeds to get him to fuck her.

Not "tries to," mind you; not "acts all kittenish but the hero is too virtuous for that jive." Successfully, in the space of about 45 seconds of seductive effort, arrives at penetration.

It could be a testament to the raw single-mindedness of raging testosterone that flows through the 300 movies that the only reasonable intercourse (pun intended) between our red-blooded (but this time, blue-caped) male hero and the film's villain (given that the villain in question has an available vagina) would be for them to have sex - because, I don't know, talking's for sissies?

Except, of course, that the aforementioned vein of testosterone in the film's alchemy is so pleased with itself that it needs Artemisia, not Themistocles, to be the sexual initiator - and therefore, inadvertently places her as the successful party in the negotiation. The villainess - fie! - preys on the poor guy's natural male tendency to get a boner when exposed to breasts, and presses her advantage accordingly, and wins.

Which, weirdly enough, flips the entire balance of the scene for me. As chainsaw-ugly as the surgical approach may have been, Themistocles ceases to be Rise of an Empire's top dog, as far as I'm concerned, at the exact moment he spins Artemisia around and tries to Greek her, right up against her war table.

But when Artemisia bellows "YOU FIGHT HARDER THAN YOU FUCK!" at Themistocles when they inevitably meet on the boat-battlefield a few scenes later, there's something intensely pitiable at the core of the conceit. She's right: he does. Themistocles, like all the boy-dudes of the 300 universe right up to Leonidas and Xerxes, have wonderful bodies, and not the faintest fucking idea what to do with them, besides fighting other men until they're all dead.

The ensuing, obligatory final duel between Artemisia and Themistocles might end with her death and his victory, but it feels the other way around. For one, it's a far better sex scene than the first one they had. And second, in the petit mort sense, Artemisia gets to come - and poor Themistocles is doomed to keep on living, and keep fighting, forever.