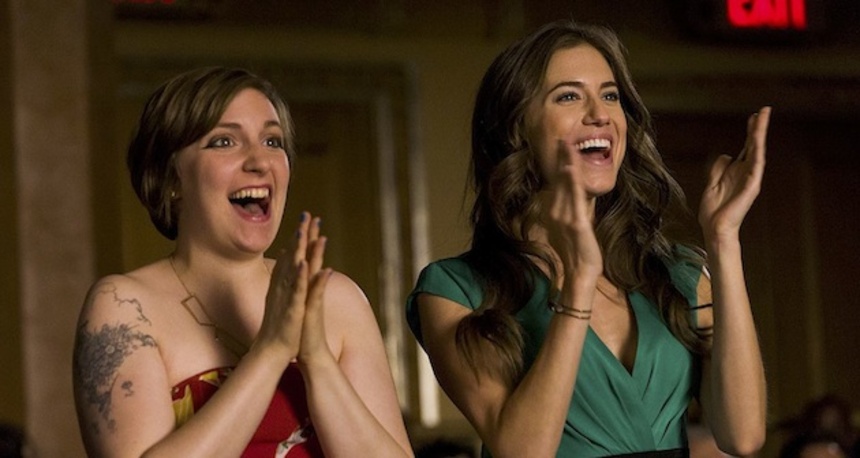 The more we can embrace the fact that none of us really has our shit together, the better off we'll be. It's like an antidote to Facebook's "greatest hits" approach to our circle of friends' lives and accomplishments: post all the pretty food pictures you like, but never deny that you're one bad decision away from puncturing your eardrum with a Q-tip.

Girls is brilliantly messy, which is probably why it pisses so many people off. Not that a successful cable television series that is - as the series' end credits so frequently, defiantly reassert in block capital letters - written, directed, and created by a twentysomething woman needs to do much more to piss people off. The very fact of it - and of its messiness - is what keeps Girls, and its writer/director/star/creator Lena Dunham, near the top of the conversation about representation and content creation in the modern television landscape.

There's a focus to the artistic intent on Girls that I admire, a refusal by the show to kowtow to either the lowbrow idiots who can't stand the thought of Lena Dunham naked, or the highfalutin' moralists who need the show to represent Every Single Thing cleanly and perfectly, just by dint of its relative singularity as a TV show written/directed/starring/created by a woman.

Girls' intentional - even precise - messiness is like a ring of snares and booby traps surrounding its core purpose. The traps dismay and befoul the encroachers who wouldn't be able to handle the series' core purpose anyway, before they even get there.

Everyone who spends their time decrying or deconstructing what Hannah Horvath's anti-glamorous nudity says about media and society is never going to get around to assessing what it says about Hannah. The fellas that sit Dunham down on their knee to mansplain her unique opportunity to represent women will never dig down to focus on what Dunham is wondering about this woman, particularly.

Take this past Sunday's key reveal, in the show's third-season finale. We learn that Hannah had at some point applied to the Iowa Writers' Workshop - but apparently never told anyone about it. Now she's been accepted, and a series of season-long arcs quietly detonate as a result, as the episode considers what, now, Hannah will choose to do.

The Iowa reveal collapsed into focus a season that saw Hannah become ever more maddeningly, nay painfully, narcissistic. She had been beautifully treading right over the line of unlikeability and into a kind of grotesquerie that can only be representative of, by my reckoning, actual human beings who don't know what the fuck they're doing.

Such a choice remains a defiantly bold stance for a series to take, crafting a protagonist who the audience completely loses sympathy for. It's slightly less risky if your protagonist is male (Walter White), but flat-out death-defying if your lead character is a plump, sexually mature female. Hannah Horvath is, in her way, the nightmare of modern America: the idea that the next generation of the dominant race and class might, at 25, still be decades away from having accumulated the experience and wherewithal to behave like a responsible representative of her society. Based on the number of people who seem to need Hannah (or Tris Prior) (or the kid sister in The Lego Movie) to represent all women, Dunham is hitting us where we live.

But back to the hidden application to the Iowa Writers' Workshop. It's a beautifully designed fulcrum for the season as a whole; a past action that informs all of Hannah's actions till now (the anguished responses to the push-pull between her dream of being a writer and the collapsing opportunities that the death of her publisher, and her dead-end job at an advertorial, represent; the nauseatingly familiar professional and personal jealousy that rears its head when an artist/artist romantic relationship sees one partner materially succeed faster than the other).

And Girls didn't tell us that Hannah had applied to the Workshop, not because nobody had thought of it when the season began, but because it is - precisely - the sort of messy, offside decision that Hannah herself would make: both to apply in the first place, and to not tell anyone about it, even her boyfriend.

It came and went so quickly that I almost didn't think about it while watching the episode. But the idea of a writing decision that is, like the whole show, driven by character rather than for effect, is ultimately why Girls is so successful at what it does, and why it's so (for some) maddeningly hard to pin down. The series is not the servant of a larger agenda; it's the servant of the character, Hannah, and of her creator's interest in interrogating Hannah for the ugly, beautiful, relatable and debatable ideas that she, specifically, can bring to light.

As much as the media at large want to make Girls, Hannah, and Lena Dunham into an all-purpose locus for the representation of women on television, the series is ultimately what it has always been: a character study of one particular girl, who is messy and - hopefully - becoming slowly less so, incrementally, painstakingly, over time.

Funny, one could apply the gist of this column to the 'manly-man'-focus of True Detective, instead of shallow internet complaining that Nic Pizzolatto just wrote more shallow women. I agree that in any endeavour, the story comes first and the agenda/social-commentary should emit naturally from the material, rather than co-opt it.