At Last! SNOWPIERCER To Break The Ice On June 27th 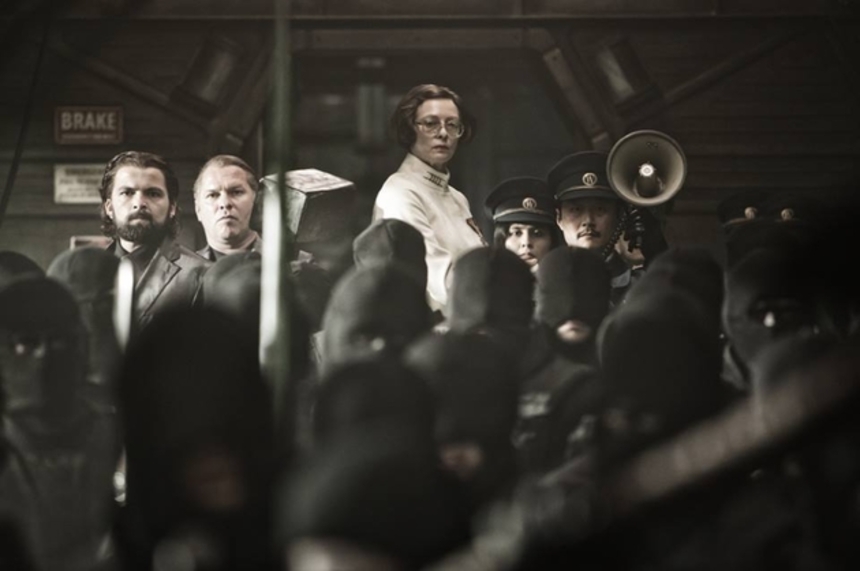 UPDATE: CJ Entertainment, the producer of Snowpiercer, has confirmed that the film will be released in June, though according to them a date hasn't been finalized.
It's been a long and winding road but Bong Joon Ho's eagerly anticipated Snowpiercer has finally secured a North American release date courtesy of US distributor The Weinstein Company. The film will receive a limited release beginning June 27th (the same day as the new Transformers film) through TWC's Radius label, which would indicate that a day and date VOD release is also on the cards.
Following a long standoff Bong was able to retain the final cut of his film (which has already been released in Asian markets and France in its intended form). The compromise was that the film's release was downscaled.
Snowpiercer was a big hit in its native Korea, with over 9 million admissions, and has been very well received by critics. It's no secret that ScreenAnarchy has been a big supporter of the film with three of us voting it as the best film of 2013. The film is also going on release in China on March 21st. Dates for the UK and other English language territories have yet to be announced but should follow in short order.
It's great that more people will get a chance to see the film, not to mention in its original form, but the delay has been long. The initial plan was for the film to platform internationally last August.
Snowpiercer takes place in an ice age in the near future where a train houses the last remnants of the human race. The film stars Chris Evans, Tilda Swinton, John Hurt, Song Kang-ho, Ko A-sung, Ed Harris, Jamie Bell and Octavia Spencer.
Sign-In to Vote
Tweet 0 Submit

Do you feel this content is inappropriate or infringes upon your rights? Click here to report it, or see our DMCA policy.
2014bong joon hochris evanskorean filmradius-twcSnowpiercersong kang-hotilda swintonweinstein

So, for the record, when the Weinsteins claim they're not dumping your fairly pricey science fiction film with a name cast, what that means is that they're releasing it the same day as TRANSFORMERS 4.

That said, at least I now have something to go see that weekend.

The timing seems a little rough but I wonder if it might not work in its favor? The only people who are going to see SNOWPIERCER on opening weekend (on limited release no less) are people who probably aren't interested in TRANSFORMERS. If word of mouth for a good and different kind of action film builds up by, say, mid-August, when fatigue for over-priced CGI feasts will have set it, it may just stand a chance of reaching a quality-starved (if not enormous) audience.

Wishful thinking I know, but not impossible.

In Britain, everyone avoided going up against 'The Phantom Menace' when it opened... apart from an enterprising independent who chose that week to revive 'The Third Man'.

Entirely predictably, the critics used it as a club to pummel George Lucas with, and although its gross was the merest fraction of 'Phantom's, it nonetheless managed to hit six figures - an amazing amount for a revival of a fifty-year-old black-and-white film, and certainly WAY ahead of expectations.

Agreed. People will flock to cinemas for TRANSFORMERS 4, notice it's sold out, want to scratch a science-fiction action itch, and end up going to SNOWPIERCER instead. Shame it will only be getting a Limited release, though. I hope it can leech an audience out of T4's inevitable huge second-week drop-off.

Doesn't anyone know what the changes are the Weinstein's wanted?