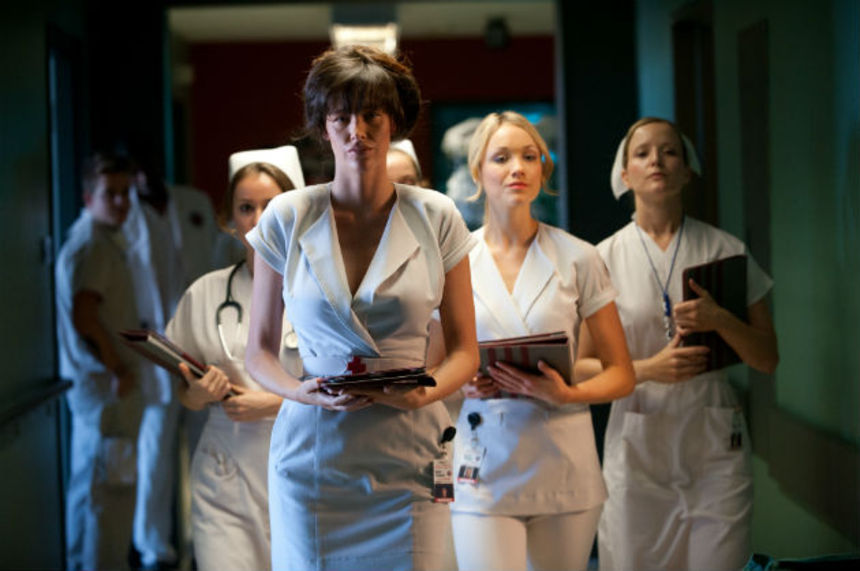 Back in the halcyon days of the 1970s, producer Roger Corman could assign a young director to make a film on a tiny budget on a tight schedule with almost complete freedom, as long as elements that could be exploited -- nudity, action, violence -- were included. He made it look so easy! In the decades since, hundreds have followed that formula, but they usually leave out the crucial ingredients that distinguished the best films of Corman and his protégés: some degree of social consciousness, and the ability to make a film that would still be good even without any exploitation elements.

Nurse makes sure to include the classic exploitation elements, and even adds 3D in select theatrical exhibitions for good measure. This means that Paz de la Huerta struts like a runway model, either naked or scantily clothed, for the majority of her scenes, Katrina Bowden exposes more skin more often than she has before, two actors (Corbin Bleu and Boris Kodjoe) bare their chests and backsides, and multiple buckets of blood are spilled liberally, in between surgical incisions and stabbings and fisticuffs.

Take those exploitation elements away, however, and Nurse collapses like a skeleton without a spine. What's left is a would-be thriller without any suspense. The serial killer is identified from the outset -- yes, it's Abby Russell (de la Huerta), nurse of the month, a closeted gay woman who temps cheating men and murders them in orgasmic bliss -- so all that awaits is her inevitable outing as a homicidal maniac. All the men in the movie are sexist dogs, of course, blinded by her outrageously risqué outfits and continuous come-hither walks through the hospital hallways, and all the women simply ignore her, until Danni (Bowden) arrives on the scene.

She's a newly-graduated nurse, whose psychiatrist stepfather (Martin Donovan) has a wandering eye -- uh oh -- and whose sexy boyfriend Steve (Bleu) is pushing her to move in with him. Abby quickly descends upon Danni, though her intentions are never clarified. Is she interested in her solely as a sexual playmate? A possible future collaborator?

Explanations on that front are never forthcoming, because the answer is plain and simple: She's kra-kra-kraaaazy!!! 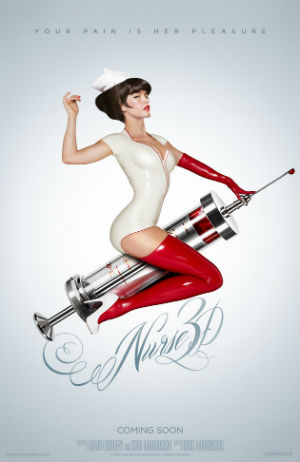 As an exploitation film, Nurse stretches back beyond the 1970s to the 1950s, when medical "issue" pictures were more common and "crazy," hysterical patients and rogue medical practioners roamed hospitals freely. Divorced from even a hint of social consciousness, though, Nurse must rely almost entirely upon its exploitation elements.

Director Douglas Aarniokoski (The Day) demonstrates no special talent for staging action scenes, and a lengthy bloodbath sequence feels like one more item on a checklist -- 'oops, we don't have enough violence, so let's fill this with as many acts of violence as possible.' As she's demonstrated in the past (The Limits of Control, Boardwalk Empire), Paz de la Huerta is willing to bare her body and swing it around like a weapon; the odd cadence in her delivery of the English-language dialogue lends it more mystery than it deserves.

Katrina Bowden, who was excellent in the horror-comedy Tucker & Dale Vs. Evil, must check her comic instincts at the door, since she has nothing funny to say in this movie. That's a shame, because it fairly cries out for more tongue-in-check humor. The best it can muster is when, after a long night of homicide, Abby tells her dweebish neighbor, "My schedule's been murder."

Nurse probably plays best as a late-night goof without any goofiness to it, the equivalent to a computer screensaver of logs burning in a fireplace. It looks about right, but it never warmed me up, and left me feeling burned for spending money on it.

The film opens today, February 7, in single theaters in New York, Los Angeles, Chicago, Phoenix, Seattle, Dallas, Charlotte, Jacksonville, Orlando, and Tampa. It is also available for rent or purchase via various Video On Demand platforms, which is how I watched it (in 2D). Visit the official site for more information.