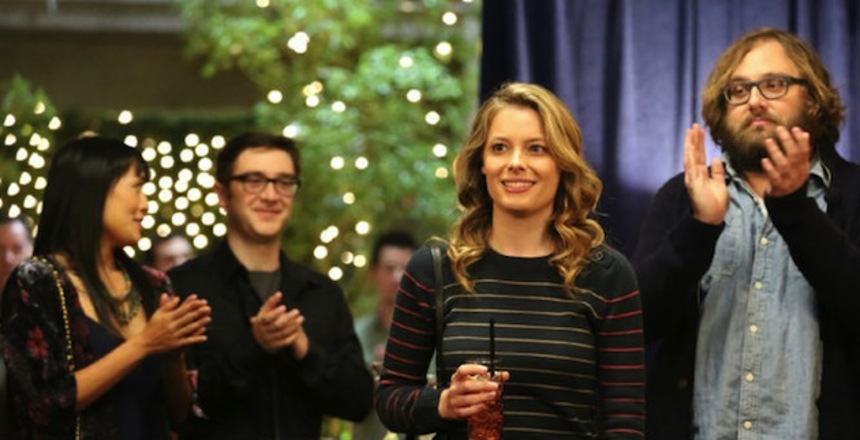 Before we get to the review proper... yes, to the two people who read these, I missed reviewing the last two episodes on account of some serious Sundance fatigue (In such a state I became selfish and also just wanted to enjoy the show without any extended obligations). But in that sorta-absence Community came forth with two of its strongest episodes in quite a long while. We had a more than fitting send off to Donald Glover, and the first post-Troy episode that proved Community was still a show about an eclectic school community with many dynamic assemblies of character, tone and plotting.

That brings us to tonight's episode, one which takes us down a more somber, if ultimately bittersweet and very existential road. Alan Sepinwall, a man much wiser in the ways of writing about TV than I, cited that "Bondage..." reminded him of the mid season 2 episode "Mixology 101", that gloomier, if more realist, and truly exceptional episode which saw Troy, on his 21st birthday coming to terms with the many responsibilities he must shoulder when it comes to the group of friends he's chosen. It's one of my all-time favorite episodes of the show, as it does indeed play that bittersweet card, something Community does well when it wants to, and certainly better than most other sitcoms on air are able to balance.

Which brings us squarely back around to "Bondage". It's been no secret (at least to Jeff and us) that Professor Duncan has been pinning for Britta, and so he asks of his seemingly increasingly depressed, apathetic friend and colleague to help him out. Jeff retorts that if Duncan wants to win Britta over he "just needs to find the most tragic cause he can pull out of one of those free hippie papers on the quad". And so the Save-Greendale committee, sans Abed and Hickey (more on them soon), are off to a theatre performance that benefits starving children with cleft palletes. It's only when Britta is called up by some old activist friends and gives a heartwarming selfless little speech about trusting yourself does Jeff suddenly want to stick around.

Meanwhile, Abed dresses up as the classic Kickpuncher, so as he can crash the premiere of the new Kickpuncher movie with an inferior redesigned suit. He stalks the halls of Greendale, longing for Troy, when he decides that it may be a convenient plot device to bond with Hickey, who is hard at work in his office on his Jim The Duck comic strip. What happens next is rather genius: Abed sprays foam all over Hickey's artwork only to get handcuffed to a filing cabinet, so he can learn the consequences of his actions. It's a classic sitcom-style situation, complete with wacky visual gag, and when played on a show with no laugh track, it actually becomes a very sobering moment. Hickey angrily declares that Abed is spoiled, that he's never known what its felt like to be refused something, that in the last 5 years everyone has accommodated Abed's fanciful way of thinking, wearing pajamas during the middle of day and having pillow fights and eating cookies and ice creams because "Abed is imaginative." As Hickey directly put it: "Quick everybody hide their hamburgers! If Abed sees a hamburger we'll all travel in time!"

Aside from dropping Annie and Shirley in the first act (they converse about the avant garde play's meanings around being drones in a corporate hive mind, and then gleefully decide to go to McDonald's), each character gets paired off for the remainder of the episode, resulting in a series of B-story-style vignettes that all wrap up to an A-story level thematic: It's all about self-realization and self-wroth, and how we perceive ourselves around others, and also how we think others perceive us. Hickey is upset that Abed ruined his comics, but is ashamed of sharing them, afraid Abed will not like them. Abed can't handle the way Hickey is treating him and actually gets angry. Jeff is reluctant to admit to Duncan that when people genuinely like Britta he gets turned on by it. And then there is Chang who must confront his own sanity when he accidentally performs for an audience he is told are ghosts, by a janitor who may also be a ghost. It's a silly sounding plot that becomes heart-achingly and hilariously affective, providing Chang with perhaps his greatest pathos since season 2.

As for Britta, reconnecting with her old friends doesn't prove all its cracked up to be. Now wealthy real-estate investors, they declare she's the only one with nothing to lose, when she suggests that they "Bansky" the hell out of an insulting billboard. Turning on her, she is devastated, and to Jeff's dismay, she goes to Duncan for comfort. Now the concern here is that Britta is being used as no more than a prop in Dunanc and Jeff's own posturing, but what Jeff ultimately can't handle is that two lonely people who have a lot of trouble loving themselves abandon him for seemingly each other. Duncan then knows it is in no way right to take advantage of a vulnerable person quite simply because he recognizes a lot of his own troubles of self-worth in Britta.

Where many of our characters end up tonight are places where they come to terms with tried and true lessons, downright cliches in a long book of cliches. Though after all, that book is so long because it's also very genuine. More often than not, Community faces those things we call cliches, and turns the mirror around on us and says "its humanity, silly. It's awkward, and weird, and sometimes a little mushy, and also sad. It's existential. But that's okay." If anything, tonight's episode reminds us that even a sitcom, amongst all the jokes and gags and classic tropes, has to have honest to goodness substance.

What's fascinating about Community as a whole is that it's been a show that's taken many different onscreen forms, and adapted to change behind the scenes (from departing cast members and writers and other BTS turmoil) better than most shows because it's acknowledged such vulnerable difficulties back onto screen quite well (at least this season). In all of this mutability it recognizes too how people do take time to really make shifts, and often fall back on old patterns or stories if they don't make new intentions clearly. Tonight's episode allowed for some characters to take some small, careful but fully empowered steps forward, while acknowledging the fact that those old patterns are apart of the substance too. Which is to say, good on ya Harmon and co. Here's to six seasons and that movie.