70s Rewind: AIRPORT, The Movie That Made Me Afraid to Fly 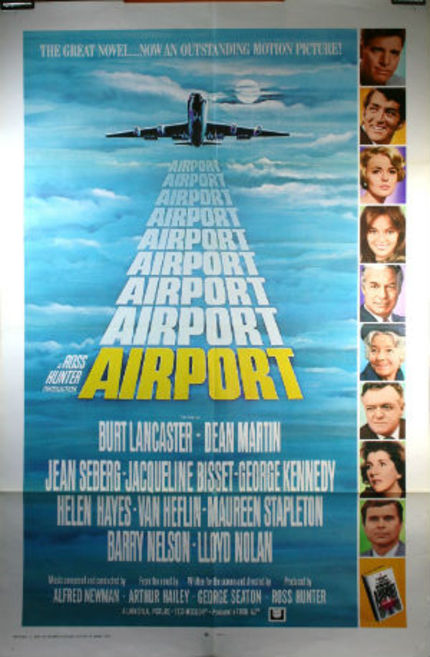 Look, not every flight can promise Liam Neeson will be on board as your personal air marshal, ready to kick ass as he foils an extortion plot, as in this week's Non-Stop. Without that assurance, anyone might be afraid to fly.

But my fear of flying started long before 9/11 and the Age of Terrorism, stretching back even before Erica Jong published Fear of Flying in 1973 and introduced the idea of the "zipless ----," which, in turn, made me terrified of women and what they might expect of me. No, I blame one movie in particular for making me afraid of stuffing myself like a pork sausage into a casing that is far too small for my size.

I was brought up on The Jetsons, so I couldn't wait to take my first airplane flight, for which my parents properly dressed me up in a suit and tie. When the pilot walked down the aisle, I asked my dad who was flying the plane, and he told me to ask the pilot, and so I did, and got my first smart-ass comment from an adult who looked like God.

So I was very happy to see Airport a couple of years later. Dean Martin was the very suave image of an airline pilot -- we shared a family name, after all! -- and seeing Jacqueline Bisset made my stomach feel funny. The airline people were so efficient! Gosh, it was just like real life!

But Van Heflin looked very sad, and I felt bad for him, and then he did something very bad, and everything on the plane went flying out a hole, and I crawled up inside myself and got very afraid. I had no idea that something could make a hole in a plane. I could barely breathe. It was a good thing that Dean Martin was there to calm everybody down, especially since he almost went flying out the little hole, too.

I watched the rest of the movie, and I'm glad everything turned out okay, except for poor Mauren Stapleton, who kept looking for Van Heflin and looked very, very sad, and then she cried, and I cried, too.

Suddenly, planes didn't seem so cool anymore, and I didn't fly on a plane again for many years. 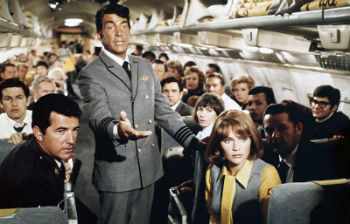 Released in March 1970, Airport became a major box office hit for Universal Pictures. Arthur Hailey's best-selling novel, published in 1968, served up a tempting array of roles, revolving around the operations of a major metropolitan airport on a busy winter's day.

Ross Hunter, known for his glossy productions of Douglas Sirk melodramas and comedic 'women's pictures' starring Doris Day and Debbie Reynolds, applied that style, working with writer/director George Seaton, another old hand (1947's Miracle on 34th Street). They keep the focus on a very odd triangle. Married pilot Dean Martin is carrying on an affair with stewardess -- not yet called flight attendant! -- Jacqueline Bissett, who has just told him that she's pregnant. Meanwhile, Martin has an antagonistic relationship with his brother-in-law Burt Lancaster, who is the manager of the fictional Lincoln International Airport in Chicago.

The story takes off with Martin at the helm of a 707 bound for Rome, Italy. On board is the desperate Van Heflin, with a briefcase he guards fiercely, and sitting right next to him is the delightful, irrepressible stowaway passenger Helen Hayes. On the ground, Lancaster barks and occasionally bites at the ground crew, which includes Jean Seberg, Lloyd Nolan, and George Kennedy as Joe Patroni, a mechanic who will play a key role later in the film. 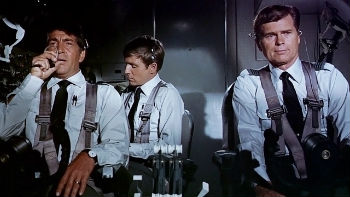 I've watched Airport multiple times over the years, and though I admit I laughed throughout a couple of those screenings, a more recent viewing impressed upon me the earnest craft on display. Ernest Laszlo's photography is polished and sumptuous; he earned an Academy Award nomination.

So did Alfred Newman's original score, the last completed work by the longtime master of studio music, a triumphant blast of excitement that may be the film's most enduring element. In all, Airport received 10 nominations, with sentimental favorite Helen Hayes winning for Best Supporting Actress, over Maureen Stapleton (and Karen Black in Five Easy Pieces, Lee Grant in The Landlord, and Sally Kellerman in MASH).

It's a very old-fashioned movie, a melodrama whose creaky plot mechanics groan loudly. Yet it struck that middle ground for audiences, promising a peak behind the scenes at airport operations and showing what goes on in the pilot's cabin. Universal Pictures -- and other studios -- mined the formula successfully for years, dressing up disaster pictures and other genre fare with all-star casts and pumped-up production values.

By 1980, disaster pictures had run their course, leaving the formula ripe for parody in Airplane!, which drew much inspiration from 1957's Zero Hour, co-written by Arthur Hailey. For certain younger audiences, however, 1970's Airport may still work wonders as a means to instill a fear of flying.

70s Rewind is a column on films released during my favorite decade of movie making.

Do you feel this content is inappropriate or infringes upon your rights? Click here to report it, or see our DMCA policy.
70s RewindAirportArthur HaileyBurt LancasterDean MartinGeorge SeatonRoss Hunter