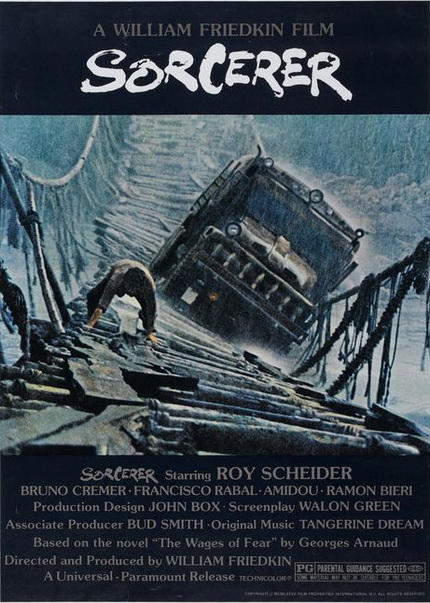 Finally having all the legal issues settled, Sorcerer, William Friedkin's long buried 1977 remake of  Henri-Georges Clouzot's classic suspense piece Wages of Fear, will be available to those outside of the European festival circuit (where it played via a restored print at Venice last year, but few (perhaps no) other cinematic bastions - no TIFF or NYFF or Lightbox or MOMA.) Warner Bros. Home Entertainment is releasing the film sans-extras, but in glorious Blu-ray on April 22, 2014.
The full Press Release, which includes notes on the restoration, is below:
January 6, 2014 - William Friedkin's Sorcerer, the cult suspense thriller that has been largely overlooked since its 1977 release, has now been acquired and fully restored by Warner Bros. Home Entertainment and will make its Blu-ray™ debut on April 22, 2014. The release, also available on DVD, will be packaged as a 40-page Blu-ray book filled with beautiful images from the film and excerpts from the book, "The Friedkin Connection: A Memoir."
Sorcerer is derived from the same Georges Arnaud novel that inspired Henri-Georges Clouzot's 1953 French classic, The Wages of Fear. The film, made following the successes of Friedkin's The French Connection and The Exorcist, tells the story of four men who, for various reasons, cannot return to their own countries and end up in a dismal South American town where an American oil company is seeking courageous drivers willing to haul nitroglycerin through 200 miles of treacherous terrain. The four displaced men have nothing to lose so they agree for a small payment of cash.
Roy Scheider (Jaws), Bruno Cremer (Under the Sun), Francisco Rabal (Dagon) and Amidou (Ronin) star in Sorcerer which Friedkin directed from a Walon Green (The Wild Bunch) screenplay. The haunting music was the first credit for Tangerine Dream, the German electronic experimental band who went on to provide many successful scores for such films as "Risky Business," "VisionQuest" and "Catch Me if You Can."
Over the years, awareness of the film has been steadily building as a result of Friedkin fan requests and newly-found praise from critics[1]. Then last year, the director was asked to introduce Sorcerer for its screening at the Venice 70th International Film Festival where he was presented with the Golden Lion Award for Lifetime Achievement.
In a recent L.A. Times interview, prior to the Venice Film Festival, Friedkin offered some theories as to why the film may have failed to achieve commercial success when it was initially released:
"The only known actor, who was not a major star, was Roy Scheider...and people didn't really understand the significance of the title [the name of one of the trucks] -- they thought it was a film similar to 'The Exorcist.' [But most importantly], the film came out just after 'Star Wars,' a movie that became the template for the future of American film, which it basically still is.
"I have a great fondness for Sorcerer, more than any other film I've made.. Sorcerer is the one I hope to be remembered for and the one film that came closest to my vision."
The film has been remastered by Warner Bros., under Friedkin's supervision along with colorist Bryan McMahan who has worked with the director since 1994. "The new restoration makes the film appear as if it was just made. None of the essentials -- the clothes, the hair -- are dated in any way. It looks the way it looked to me when I looked through the lens of the camera," said Friedkin.
The restoration began with a 4K film resolution scan of the original 35mm camera negative.
Ned Price, Chief Preservation Officer of Warner Bros. Technical Operations, who oversees restoration projects for the studio, said, "I was amazed at the brilliance of the original photography. Up to this point, I had only seen poor quality 35mm theatrical prints made from inferior subtitled dupe negatives. Working from the 4K scan allowed us to free up all the information contained in the original negatives."
The soundtrack was restored from the original 35mm 4-track stereo masters which were in remarkably good condition and contained full dynamic range.
The new restoration allows audiences to appreciate the true visual and aural impact of this film.
Sign-In to Vote
Tweet 0 Submit

This is great news. I have the Tangerine Dream Soundtrack on vinyl, but I could never find the film. The Warner Bros. restorations (esp jaws) are top notch and I can't wait to see how this looks after so long. Well done to all involved.

It played at the Cinematheque française and Friedkin gave a master class for the occasion. Amazing moment!