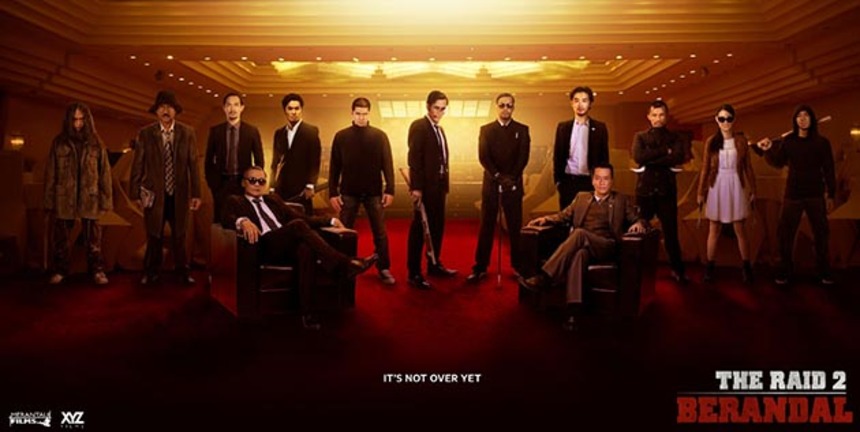 It was no hyperbole when we called The Raid: Redemption "the best action movie in decades." That film redefined martial arts cinema for the 21st century and announced Gareth Evans as one of the most exciting young directors working today. So it has been a tense two-and-then-some years waiting for a follow-up from Evans. Would taking the action outside of the lone building keep up the first film's wicked pace? Could a sequel replicate the form of the first film without feeling repetitive? Did Evans have the skills to tell a much broader story? Was it even possible to top the bone-crunching action of The Raid: Redemption?

The answer to all of these questions is a resounding, "Fuck YES!" The Raid 2 is a full force actioner, just as tightly cut at almost an hour longer. It's every bit a sequel to the first film and an expansion of the Merantau universe. Evans has expertly crafted a complex and interesting tale that weaves through the numerous bloody fight set pieces. And yes, the action in the sequel is even more impressive, even more artistic, and even more vicious than the first film.

The film opens not long after the events of The Raid: Redemption have wrapped up. Through a stylized opening sequence that plays loose with chronology, we see the death of Rama's brother and the effective cleaning of the slate from the first film. Rama tracks down a man named Bunawar, the good cop his brother told him to find. Bunawar explains to Rama that Tama (the bad guy boss in the last film) was a small fish. Tama actually worked for the crime boss Bangun. The real prize is Bangun, and more importantly, to find out which high level officials and cops are on Bangun's payroll. To do this, Bunawar needs Rama to infiltrate Bangun's organization. Rama would prefer to just go back to his loving wife and son, but Bunawar makes it clear that if it becomes known to Bangun that it was Rama who took out Tama, he and his family are as good as dead.

Bunawar's plan involves giving Rama a new identity by killing anyone who knew it was Rama that took down Tama (not that there are many left), and then placing Rama in the same jail as Bangun's son Uco. Rama immediately catches Uco's eye after he holds his own against 30 prisoners in the film's first action set-piece shot in a dirty bathroom stall. But Rama refuses Uco's quick offer of employment, earning a bit of scornful respect from the crime-boss-to-be.

It takes Rama coming to Uco's rescue is an enormous battle in a muddy prison yard (perhaps the film's most fantastic scene) to cement Uco's trust in Rama. And when Rama is finally released from prison, it is Uco who picks him up and takes him straight to his father to receive Bangun's personal thanks. Rama accepts Bangun's offer to work for his organization and quickly proves his value as a top enforcer. Everything looks to be falling into place for Bunawar's plan.

In the Merantau Universe, half of Jakarta is under the control of Bangun while the other half is controlled by the Yakuza and their crime boss Goto. Bangun and Goto have been in alliance for 10 years and things are mostly peaceful for the two gangs. But Uco hates the Japanese influence on his city and loathes his father's reluctance to stand up to Goto. Uco's thirst for power makes him the perfect target for Bejo, an upstart crime boss who tempts Uco with the promise of the two of them defeating Goto and carving up his territories for themselves. Bejo's plan and Uco's greed threatens Bunawar's operation and promises to throw all of Jakarta into bloody mob war, leaving Rama right in the center of the violence.

If all of this sounds pretty complicated, you're not wrong. The details of this Godfather-esque plot are setup in the first act (with a good amount of fighting interspersed). This leads to plenty of exposition that can be tricky to follow in a mixture of Indonesian, Japanese, and a bit of English. However it is worth the effort as all of this stage setting means that once the pieces are in play, the plot can unfold with relative ease, allowing for far less exposition, and fight sequences with real story stakes.

And by God are the fight sequences explosive. It's nearly impossible to oversell the action. Bones are broken, faces are kicked, heads are smashed, wrists are slit, torsos are impaled, skulls are penetrated, and hundreds of bodies are shredded by bullets. The martial arts on display from Silat experts Iko Uwais, Yayan Ruhian, and Cecep Arif Rahman are every bit as impressive as the first film. But there are many more weapons in play this time from hammers to baseball bats to box cutters to pick axes to hand sickles. There is no shortage of imagination at work here when it comes to ways to wound, disembowel, and kill one's enemy.

This brings up a real concern. The Raid 2 is an extremely violent film. It is quite certainly one of the most graphically violent films ever made. And to their credit, the stunt, effects, and sound design teams have made one of the most realistically violent films ever, as well. There is no punch, kick, or vicious forcing of a limb to bend a direction it isn't supposed to bend that doesn't look painfully realistic. Never has a film been made that has caused an audience to be more vocal with grimacing oohs and ahhs.

So what is to be said about this much realistic violence? Some people will undoubtedly be bothered by it. Fringe organizations will inevitably call for a boycott. Zealots could make it a rallying cry for what's wrong in our society. Those who don't like violent films should most certainly steer clear. But action fans...? Well action fans are going to absolutely lose their shit. Gareth Evans better be ready to sit tall on action cinema's high throne of bloodied foes. All hail the King.

There is nary a footstep put wrong in this film from the incredible production design to the perfectly moody score. The acting is great across the board with Arifin Putra as Uco and Oka Antara as his father's bodyguard Eka giving particularly confident performances. But it is the scale of the film that truly defines it as a masterpiece. The muddy brawl stands out as the film's most impressive orgy of mayhem but there are incredible fight sequences in a subway, in the snow, and one of the most exhilarating car-chase-fist-fights ever filmed. All this adds up to a movie that easily trounces the already astronomically high expectations set out by its predecessor. The Raid 2 is quite frankly, the most epic martial arts action film ever made. And no, it's not just damned hyperbole.

It should be noted that ScreenAnarchy Editor-in-Chief Todd Brown is credited as an Executive Producer of The Raid 2. That has no factor in this review. Trust us, we'd tell him if it sucked.

Do you feel this content is inappropriate or infringes upon your rights? Click here to report it, or see our DMCA policy.
Arifin PutraCecep Arif RahmanGareth EvansIko UwaisMartial ArtsMerantauOka AntaraSilatYayan Ruhian