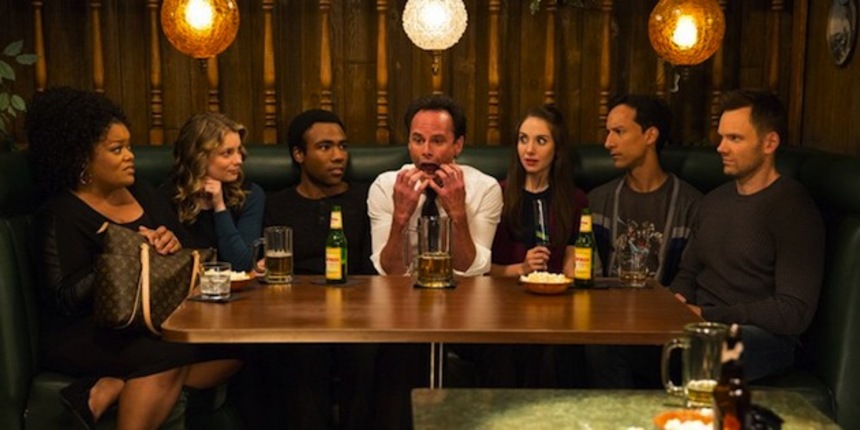 At the end of last week's episode the ol' study group found out former member Pierce Hawthorne had passed away. It came after a moody, Zodiac style procedural, and I thus wrote: " While the reveal of Pierce's death at the end certainly cemented the gloomy mood, I'm not sure if an homage episode so reliant on plotting and such a distinct spectacle was truly the right place for the news. Let's then hope there will be a little more to this thread in future eps."

Heh. It's fun to quote oneself. So color me impressed, because this week's episode confronts Pierce's death, his life and what he truly meant to the study group in particularly impressive fashion. Truth be told I didn't laugh out loud despite a lot of fine bits, but this episode's real strengths were all based around the darker edges the group had to go to face Pierce one last time.

After a full-on Laser Lotus funeral the gang skulks into the study room only to be confronted by Mr. Stone, a representative of Pierce's estate. Stone states that upon Pierce's death, each member of the group became a suspect in what could be his possible murder. In order to be cleared they must all undergo a polygraph test -- in this case a group polygraph. As Jeff gets hooked up he states polygraph is "the acupuncture of the law system." It's a rather amusing scenario, and quite clearly another bottle episode where the group is meant to turn on each other. Heck, it's right there in the title, which pays homage to "Cooperative Calligraphy", a fan favorite if there ever was one.

Stone has a set of questions written by Pierce for each member to answer. Questions that quickly wear them down, until it is revealed that was just the warm up phase, and now, to truly be cleared and receive a portion of Pierce's estate, the real questioning shall begin. Jeff promptly 'Wingers' that Pierce is creating "a labyrinth of emotional manipulation and strategic instigation."

And he's right, per usual. But what's so beautiful about this episode is how Pierce totally absent from this episode in the form of Chevy Chase, is very much this episode. Pierce as the instigator, the curmudgeon, even the confidant, plays into how the group continues to lie to each other even in his absence. They come to terms with the fact that they've always lied to each other, put each other down, with or without Pierce. Addressing the history these people have in such a way is rather extraordinary to watch unfold. While there are a few moments, especially with Abed and Britta, that feel like characters at their most stereotypical, that's also part of the point, since Pierce so often himself labeled the group in such narrow terms. Determined to just stop the lying, the group lays it all on the table, with Troy getting the capper ""I've never been to Legoland. I just wanted you guys to think I was cool."

What's extra special about this episode is that in its own covertly Piercian way it built up to how Harmon and co. are going to deal with the departure of Donald Glover. As each character is bequeathed a gift from Pierce (all of them get sperm), Pierce offers Troy, someone he thought had the heart of a hero, his $14.4 million worth of shares in Hawthorne wipes... only on the condition that he take Pierce's yacht and sail around the world, becoming the man Pierce could never be. It may sound like a lazy idea on paper, but for this to come from Pierce, a man who really knew how wonderful each member of the group was, knew their potential and worth when they couldn't see it, especially because he himself had squandered so much of his own life, makes it worthwhile.

I applaud the show for ending (sans hilarious bumper with seemingly stone-faced Stone's true colors) on such a somber moment.