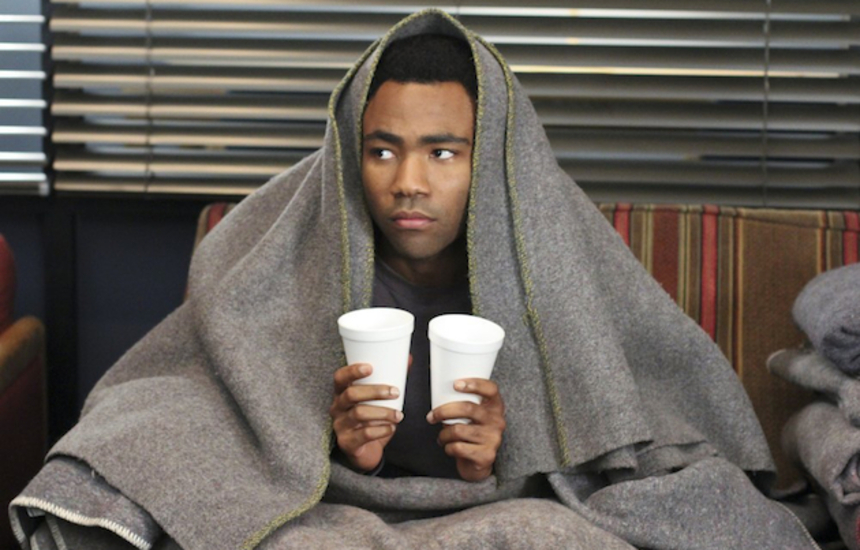 Back in the day, say late 2007 or early 2008, movie audiences, critics and those people that give out awards were talking about two particular American films that had struck accord at the cinema: There Will Be Blood and No Country For Old Men. These were game changers, classics in the making, un grande cinema. But there was another film a smaller, if no less vocal group was championing: David Fincher's Zodiac. Seems as if the writing staff of Community was a part of that group (as was I).

Something terrifying stalks the halls of Greendale. Someone who has cast a black net of fear through this humble community college before. The ass crack bandit, the bringer of change (because he slips quarters down people's exposed butt cracks) has struck again, turning the school on its head (or on a dime?). With the Dean unwilling to investigate the faculty, Annie enlists the help of Jeff and so three episodes into the new season we get some serious A/J shipping.

While the clear homage to Zodiac (and Fincher's filmography, plus any general procedural trope that is now firmly fixed in our pop culture lexicon) keeps things moody, cold, quite literally wet with non-stop rainshowers, and also very tonally blue, gray and brown (props to production design and wardrobe), the jokes come flying. Jim Rash, consistently gunning for MVP, delivers some amazing lines, their genius totally lost here because... well, I am writing this, you're reading this, and neither of us are Jim Rash (or are we?). But how about his "let me be like the 50th person at this school to ask this... what is this?" He wiggles his index finger between a perplexed Jeff and Annie. "What is this creepy business?" Or how 'bout his impressive octave switch from the low guttural "so much pain..." to his festive squealing of "but now it's time to heal!" I'm afraid I was so obsessed with jotting down funnys from the Dean that I'm missing out on everyone else.

Shirley, Troy, Abed and Britta are sidelined for much of the episode, though Troy does end up becoming traumatized by the bandit, which leads to Abed giving him a blanket and cup, citing "this is how they comfort victims in the movies." And I will say that Gillian Jacobs reading the first letter from the bandit was pure hilarity.

What continues to please me about Community after so many years, after all the acknowledged and well worn ups and downs, is that when the show just goes right down the pop culture rabbit hole, and I mean really burrows deep and just owns it and has fun, it goes to a place of such joy, a special place for us die hard fans, the ones who held on. Last night's episode may be one of the smoothest homage episodes done in a long while because well... everything that's an homage just blends rather well into the world of Greendale at large. Is this a memorable, all-star episode? Probably not, but it's a valuable clue for us fans hoping Harmon and co. still have their A-game. While the reveal of Pierce's death at the end certainly cemented the gloomy mood, I'm not sure if an homage episode so reliant on plotting and such a distinct spectacle was truly the right place for the news. Let's then hope there will be a little more to this thread in future eps. Though acknowledging his passing and moving on seems fine to me too. Maybe I'm willing to let the show coast on this, just like I'm coasting on this review?

In other news, Starburns makes a proper return (with his cat car in tow), as does Professor Duncan, who is pinning after Britta, and it's been a real pleasure to have Hickey remain a Greendale staple... along with Vicky, Neal, Garret and Leonard (now with overalls!). And amidst the many Dave Matthews Bands references (Dave to the true fans) did anyone notice Ben Folds as the Botany teacher? Community sure does love the 90s. And I'm sure glad to have Community back and in such swinging form.