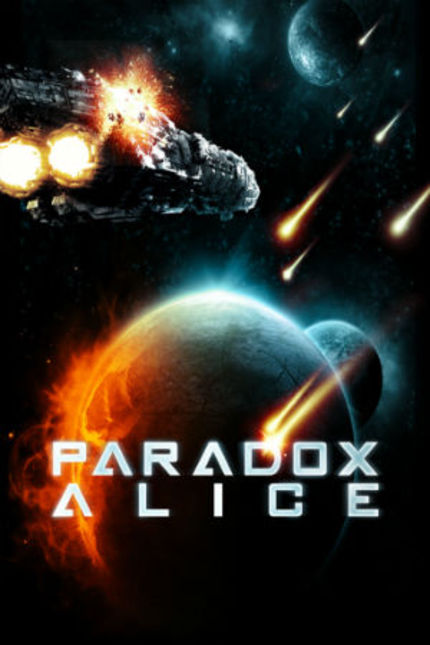 'Oh cool, a low-budget sci-fi film about a guy who goes through a mysterious sex change in space while humanity dies far below! Sounds pretty interesting, right? Even if it's bad, it's bound to be weird enough to be compelling in some way...'

Such was my mindset when approaching Eric Dapkewicz' debut feature, Paradox Alice. I liked the idea of a transgender protagonist, and I generally enjoy the sci-fi formula of inscribing contemporary anxieties into a futuristic objective reality. Imagine my growing dismay as this (already tenuous) enthusiasm slowly withered and died over the course of the two hours it takes for this film to insinuate its Christian-centered, cliché-ridden storyline into my once open and forgiving mind. In Paradox Alice, the universe is a dingy basement filled with horny, disrespectful dudes drunk on nostalgia floating through a screen saver from 2007. I don't think I like sci fi anymore.

Broken down to its major plot points, the movie is somewhat compelling. The earth needs water. Crew goes to Europa to get water. When crew gets back to Earth, it has been obliterated by nuclear war. After the only woman on the ship suddenly dies, the three remaining dudes realize they are the only ones left in the universe. They argue and sadly remember their families for several minutes.

Soon the dudeliest of the dudes, Alex Fox -- "when we get back to earth we're gonna have big hero balls. Everyone will want to touch your balls" -- re-enacts the puking white stuff scene from Alien and turns from a 36-year-old bro into a 21-year-old woman. "Why am I a chick?" he/she wonders. Soon the remaining two crew members, Lt. Frankie O'Byrne and deposed Captain Jim Gray, are desperately trying to seduce their former colleague. Fox, meanwhile, learns to be a woman by combing her hair and painting her nails.

Alex Fox's transformation from a manly-man ("I'd give anything for a Porterhouse") into the quivering, tearful Alice has nothing to do with the script or with characterization. Rather, it's just a slack-jawed presentation of stereotyped gender roles that is supposed to explain itself. Alice is the central character in the film, but she is only a body. Her characterization consists of her getting to know her womanhood ("I'm weak, I'm frail"). Immediately upon waking up after the "gender mutation" she summarizes her character well. "Look at me," she yells, tearing open her shirt and revealing her breasts. "What's not to understand?" 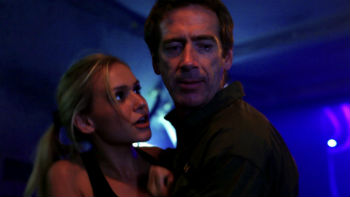 Well, there's a lot not to understand in Paradox Alice, despite the simplicity of the characterizations. The movie is frustrating not because of the plot holes (which are abundant), but because of the extremely conservative tone it takes. In many ways, it feels like it could have been made during science fiction's popular heyday in the 1950's. Many of the elements are here -- the spare set design that relies on the viewer's imagination to hold it together, the Earth destroyed by nuclear warfare and the rigid gender roles.

Like most nerds, I like my sci fi "hard" -- that is, based on indisputable scientific facts or at least extrapolations from them. Paradox Alice prefers to remain vague, insinuating that the gender switch could be a result of "protrandry" or Christian destiny. The Christian themes dominate, however. They are satirized in the character of Lt. O'Byrne (who becomes a Bible-quoting prophet and a would-be rapist) but never abandoned. Towards the end of the film, Alice Fox is seen reading the Bible. "It's an amazing book!" she says. Maybe so, but it doesn't quite explain what's happening in the film.

Eric Dapkewicz certainly had his hands full with this one: he was producer, director, editor, and scriptwriter. Perhaps some of the problems with Paradox Alice could have been solved by sharing some of the responsibilities. Low-budget cinema is most enjoyable when it overcomes its financial limitations with innovative scripts, creative editing and great acting. But this film is more a pastiche of clichés than an exercise in creativity, and it's disappointing in the sense that it could have been so much more. Perhaps it will be; the film ends with a setup for a sequel. Maybe in Part Two my questions will be answered. I suppose I'll never know.

Paradox Alice is available to watch via various Video On Demand platforms.