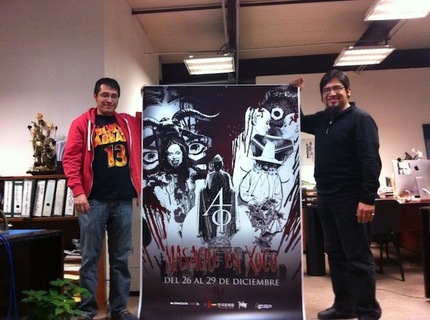 Now that Christmas is over, the very last film event of the year in Mexico kicks off today. I'm talking about the fourth edition of Cineteca Nacional's Masacre en Xoco, a fabulous 35mm showing of horror and genre cinema in general!

This is the third and final part of the conversation I had with the curators Mauricio Matamoros and José Luis Ortega and the genre cinema expert Jorge Grajales. Here you'll find everything you need to know about the 2013 edition of Masacre en Xoco plus some thoughts on the future of the showing.

ScreenAnarchy: Tell me about the lineup of Masacre en Xoco 2013.

José Luis Ortega (JLO): We have as top bet a very little yet full of heart homage to the Panic Movement, in specific to the figure of (Rafael) Corkidi, who passed away this year. He was the cinematographer for (Alejandro) Jodorowsky but also a "one man band" as he was producer, director, screenwriter, photographer, and editor. He didn't make proper horror or fantasy cinema but his films were completely unique.

I dare to say he has been always shadowed by Jodorowsky, and later it emerges the figure of Juan López Moctezuma with this almost religious cult surrounding Alucarda, The Mansion of Madness and himself. Corkidi has been behind them but right now is a good moment to appreciate him not as Jodorowsky's cinematographer but as an auteur with a very special cinema.

We will be screening Ángeles y Querubines (aka Angels and Cherubs), a Panic Movement film that touches vampirism. We will have Jodorowsky's The Holy Mountain with cinematography by Corkidi and Alucarda by Moctezuma. Also from Moctezuma there's Mary, Mary, Bloody Mary, not a Panic film but completely demented, with Elena Rojo as a lesbian vampire. It will be the opening film.

As guest country we have South Korea; it's the first time we have a guest country so that indicates the growing of Masacre en Xoco. With the support of the South Korean embassy, we have three films, two of them on 35mm. Bedeville is not a proper horror movie but one from the new Korean violent dramas, while Epitaph is a classic Asian horror film. There's also Sorum, a classic from 2001 that was first known in Mexico thanks to (Jorge) Grajales.

Mauricio Matamoros (MM): Those two groups of movies are the highlights of Masacre en Xoco 2013. 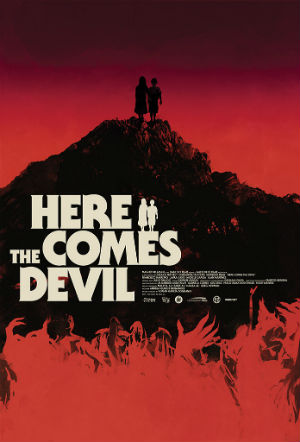 The rest are movies of all kinds of horror, including John Landis' Innocent Blood and Adrián García Bogliano's Here Comes the Devil.

JLO: It's like a premiere (of Here Comes the Devil). The movie won tons of awards at Fantastic Fest (best horror picture, director, actor and actress) and it was screened at the Morbido Festival but never distributed in Mexico.

Bogliano has been coming to Masacre en Xoco, as spectator, since the first edition. He comes to watch the movies on 35mm because that's something fabulous for him. So now he will be here again to present Here Comes the Devil. Paco Barreiro, the movie's protagonist, is coming as well.

Are there any more guests?

JLO: Lex Ortega presenting his short films and, maybe, Aleyda Gallardo, who is the protagonist (of Ortega's Contra Natura).

You announced some months ago that the Feratum Film Festival winners were going to be part of the Masacre en Xoco lineup. What happened with that?

JLO: Well, it happened something quite funny.

The big winner of Feratum was The Cosmonaut. Unlike Jorge Grajales, I really liked it but it is a science fiction movie that's contemplative, slow, boring. So it had absolutely nothing to do with Masacre en Xoco.

When we talked with Miguel Marín (director of Feratum), we established the agreement to present the festival's winners but the winner turned out to be a movie that doesn't go with the style of Masacre en Xoco so we changed it for Thanatomorphose, a movie that impacted Mauricio.

MM: It's worth noting that there was an internal struggle within Feratum's jury, for choosing between The Cosmonaut and Thanatomorphose.

Thanatomorphose was extremely close to be one of the winners.

Visceral: Between the Ropes of Madness is also a very important movie and both are really good options.

JLO: Visceral: Between the Ropes of Madness did won at Feratum; it won the Xtreme Award.

Jorge Grajales (JG): I think Visceral: Between the Ropes of Madness will be the movie everybody is looking for next year. The gore movie with an instant cult, just like A Serbian Film was.

It's the must-see movie of Masacre en Xoco, something to celebrate. 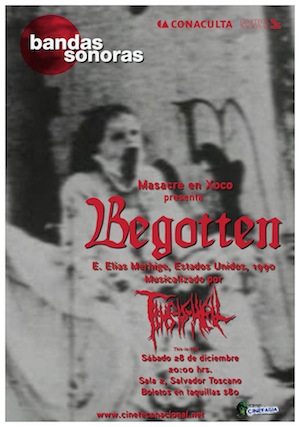 JLO: Cineteca Nacional has this film season called Bandas Sonoras, which is silent cinema with live rock music. Now I came up with the idea of "kidnapping" Bandas Sonoras for Masacre en Xoco. We are going to be screening Begotten, a classic cult movie from 1990. A Mexican trash band called This Is Hell is doing the music. They are a band very well received within the almost non-existent underground metal scene in Mexico, and they wrote a new and original score for the movie. They are recording the event with the possibility of making an album in the future.

The great classics we are going to have include The Rocky Horror Picture Show. It is going to be screened on Thursday (12/26) and some people are promoting the idea of going disguised. That would be incredible.

Also, we have a very interesting movie: It! The Terror from Beyond Space. It was, together with Mario Bava's Planet of the Vampires, an influence for Ridley Scott's Alien.

You have now a guest country (South Korea) and a guest festival (Feratum). How do you visualize the growth of Masacre en Xoco for next year? Or is it too soon to ask?

JLO: We hope to continue.

Right now there are changes at Cineteca Nacional's management. The programming politics are changing as well. The door is not closed but we need to justify Masacre en Xoco with the numbers of people attending. Last year we sold 3, 985 tickets, and with the open screenings and the free tickets, we had almost 6,000 persons attending... during the last week of the year! That speaks very well of Masacre en Xoco.

The management of Cineteca Nacional's film archive offered us agreements with other film archives. So Masacre en Xoco is becoming something that people waits for and we just hope to keep having the support from the real numbers we will be presenting.

MM: Each year is more difficult to put together the programming because there are less genre movies (at Cineteca's film archive). Presenting cinema on 35mm film will be more difficult.

Let's forget Cineteca Nacional's film archive, which are your dream movies to screen on 35mm for Masacre en Xoco?

JLO: A Nightmare on Elm Street and Suspiria.

MM: The Tenant and Rosemary's Baby by Roman Polanski.

MM: I would give one of my fingers to watch Prince of Darkness!


Masacre en Xoco 2013 takes place from December 26 to 29 at Mexico City's Cineteca Nacional. You can find the schedule here.

Read part 1 of the interview here.

Read part 2 of the interview here.

Do you feel this content is inappropriate or infringes upon your rights? Click here to report it, or see our DMCA policy.
Jorge GrajalesJose Luis OrtegaMasacre en Xoco 2013Mauricio Matamoros