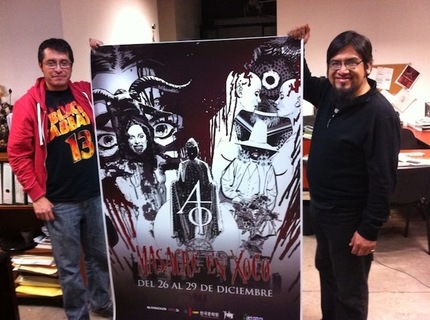 Since 2010, Masacre en Xoco has been Cineteca Nacional's annual showing of both classic and contemporary horror cinema on 35mm (or 16mm). As we all know, digital projection has replaced celluloid and at Mexico's Cinematheque things are no different. Hence Masacre en Xoco has become the one and only opportunity for horror aficionados in Mexico City to revive or experience for the first time what is like to watch films like The Evil Dead on its original 35mm format.

For the fourth edition, kicking off next week (12/26), curators Mauricio Matamoros Durán and José Luis Ortega put together another magnificent selection, which include classics like The Rocky Horror Picture Show and the Mexico City premiere of Here Comes the Devil.

I had the good fortune to sit down with both curators for a conversation about Masacre en Xoco 2013. They are definitely amongst Mexico's top horror experts; Fangoria Magazine has published articles by Mauricio Matamoros, while José Luis Ortega leads Cinefagia, the quintessential online magazine for genre cinema in Mexico, and Cineteca Nacional's printed magazine Icónica. They are also extremely kind persons so the interview lasted almost two hours and many subjects were discussed. Hell, even Jorge Grajales (Mexico's top genre cinema expert and programmer) joined us!

This is the first part of the conversation, in which Ortega and Matamoros discuss 35mm film and recall the genesis of Masacre en Xoco, some anecdotes and highlights of the previous editions.

ScreenAnarchy: Tell me about the concept and origin of Masacre en Xoco.

In 2010, Paula Astorga became the director of Cineteca Nacional (Mexico's Cinematheque) and around that time Mauricio (Matamoros) and I had long hair and we both liked horror and weird stuff. Paula used to confuse us, but one day she saw us eating together and realized we were actually two different persons with similar taste!

So she said "Why don't you do something? Why don't you program something horror-oriented for the Cineteca?" That's how Masacre en Xoco started. We said yes because we like to program and we always try to spread horror cinema in any way we can, especially by writing.

Mauricio came up with the idea of making a reawakening of classic cinema with the original format, working with Cineteca's film archive, to set us apart from the rest because, after all, we can't reach yet the festival category. They liked the idea of using the archive because horror cinema was basically enclosed. Paula supported us.

When we had ready the programming, the concept and everything, we faced the dilemma of "how are we going to name this?" We though in many dumb things and Mauricio came up with the "Masacre" (massacre) and I said, well, Masacre en Xoco. We are in the town of Xoco, there's the hospital of Xoco, the graveyard of Xoco, and so we said fuck it.

Paula was on vacation and when she returned everything was ready, the program was printed with the name. When she saw the name Masacre en Xoco, damn, she was furious! Furious! You can't imagine. She said we needed to change that but everything, posters included, was already printed so luckily it was impossible to change it. She was very worried for the reaction of the residents of Xoco but they really dug the name.

The first year we did a series of conferences. It was a very different format because we had a film and later a conference, like having a roundtable. It was great in terms of guests: we had filmmakers like Jorge Michel Grau, who at the time was very popular with Somos Lo Que Hay, and Julio Cesar Estrada, director of El Libro de Piedra. We had literature with Alberto Chimal. We had great people giving conferences. Unfortunately, the response of the audience wasn't as good. They came to watch films and not to listen conversations. That's something we learned from the first edition of Masacre en Xoco. 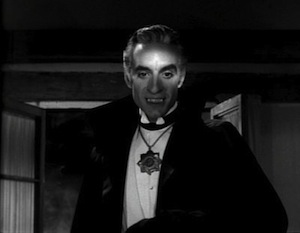 That year we also paid homage to Germán Robles. We wanted him as godfather and he came, we introduced him but once again people didn't pay much attention and the theater was half-empty. At the time we decided to take Germán Robles out of the El Vampiro character, trying to recognize more his work. We screened El Barón del Terror and Rapiña, breaking up with the El Vampiro character, and maybe that was the mistake.

Mauricio Matamoros (MM): It was, for that matter, a mistake of the audience that didn't came to watch the movies. El Vampiro is obviously very important but those other movies are as important.

JLO: It was risky and that cost us audience but people found interesting the 35mm and 16mm formats because, quite simply, they look different.

JLO: We did have some sold out screenings during the first edition.

MM: The movie marathon (closing event of the first edition) began really badly though. We had a beautiful print of Dario Argento's The Cat o' Nine Tails and there were only ten persons in the audience. Almost a sin but it was their loss.

JLO: The print of De Palma's Sisters break and people were upset. The projectionist (Oscar) put it together but it break again, so he projected the last minutes of the reel with his own hands. He was the hero and, after the screening, I said to the audience "well, this is movie magic that can't happen during a DVD marathon." People loved that and Oscar became the official Masacre en Xoco projectionist.

Do you think Mexico lacks this 35mm film culture?

MM: 35mm is cinema. We can begin a big discussion but, if we are strict, what we have now is no longer cinema. It's electronic information.

One as spectator doesn't need to know all the requirements but the truth is that people are losing that interest for knowing what is cinema. People can find everything easily on the Internet or with bootlegs and that stop them from appreciating a film. A film, whether is good or bad, requires a lot of work. We owe the great movies to many persons and sometimes people don't give to that the appropriate value. I think a film showing like Masacre en Xoco is radical in that regard.

We didn't have a budget to do the showing but being at the Cinematheque we could use the film archive. We entered to the database and obviously you need to have knowledge to search directors or actors. It's not that easy. You can go for the classics, The Exorcist, Child's Play, Hellraiser, and you won't find them. But fortunately we found very valuable films. The first edition, well, I don't think something like that has happened in other parts of the world. We are talking about a 35mm showing with great prints, films that might not be screened again on 35mm in Mexico.

Movie marathons became a possibility with video and DVD formats. Thanks to the marathons the number of spectators for genre films grows but what happens when you see a marathon with 35mm prints? Maybe nothing different happens, but what it means is entirely different. There's a lot of work behind it, projectionists, people who send the prints and our own work of searching for the films. We love it, fortunately.

I remember the first time I went to Sitges (in 2005), the director of the festival (Angel Sala) said during the press conference that maybe we were there reunited for 35mm film but in reality many movies were being recorded and screened digitally. Every year there's less celluloid and more digital movies. I was kind of sad by hearing that back in 2005 and I saw that transition here at Cineteca Nacional.

This year, everything was digital during Cineteca's Muestra Internacional.

JLO: We know that the Muestra Internacional de Cine is the main event and suddenly you have 23 DSP movies. We have been trying to get the prints for Masacre en Xoco even outside of the Cinematheque. We want at least half the movies from the selection on 35mm or 16mm. As of 2013, we have achieved that.

Genre cinema is like a resistance to the establishment and I think Masacre en Xoco is the last resistance defending celluloid. I'm still a celluloid romantic even if I do consume other formats. The audience should be a little more conscious, however, we are not trying to educate them.

Downloading a movie and then deleting it if you don't like it makes you lose sensibility. You don't realize about the work behind it, not only the production but also the preservation. Preserving 35mm prints is not saving them with a hard drive. You must preserve them with a certain temperature and once in a while you take out the reels. Mauricio and I have worked at the archive area of Cineteca and being there makes you conscious. We want people to live with the same sensibility, but even some of my Cinefagia colleagues think using 35mm is nonsense.

In the US, they have this revival culture. They revive vinyl, VHS, 35mm screenings and Martin Scorsese is working with his World Cinema Foundation. There's more conscience there than in Mexico. Each year the Library of Congress add films to their archive and they have Pink Flamingos, The Texas Chain Saw Massacre and Night of the Living Dead. They don't discriminate. That doesn't happen in Mexico.

The fact that The Exorcist, The Texas Chain Saw Massacre or A Nightmare on Elm Street are not part of the archive is actually not Cineteca Nacional's fault. The distributors are responsible for not depositing a copy here. Cineteca is a legal holder and, back in the day, distributors with 35mm films needed to deposit one print in Cineteca by law. Nobody did that. 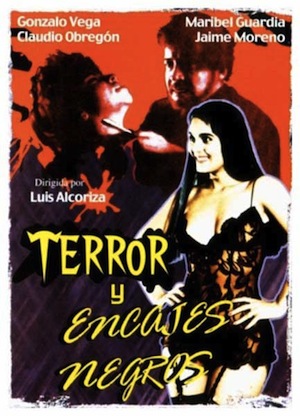 Out of the films you found at Cineteca's archive, which were your favorites?

MM: Pretty much every film that has been part of Masacre en Xoco is extremely valuable.

JLO: Well, the movie that blew Mauricio's balls off was Luis Alcoriza's Terror y Encajes Negros (aka Terror and Black Lace)! We unsuccessfully tried to contact actress Maribel Guardia for two consecutive years. Mauricio did Masacre en Xoco with the illusion of having Maribel Guardia (laughs).

MM: I think the cinema of Luis Alcoriza is one of the greatest unknown treasures in Mexico. It has been completely shadowed by Luis Buñuel and I'm not criticizing Buñuel but I dare to say Alcoriza is just as important.

It was amazing to find prints in great condition of films that I adore. Curiously, there's a minor Argento movie (Trauma) that I don't love but here we found a print. That movie was never released in Mexico so in Masacre en Xoco we had the Trauma premiere. It's not one of the great Argento films but that premiere is definitely one of the great achievements of Masacre en Xoco.

JLO: I loved having The Evil Dead on 35mm, I mean, I had seen most of the movies on Beta or VHS so having them on 35mm was a discovery. One movie I used to hate was The Texas Chainsaw Massacre 2, I even wrote a negative review, but watching it on 35mm was a completely different thing. We also came across a print of The Mist.

Last year we took a risk and decided to open with Vacaciones de Terror and, surprisingly, it was a sold out screening. People were happy seeing Pedro Fernandez! I always support the idea of having Mexican cinema and fortunately Mauricio thinks alike. We always have one or more Mexican horror movies from any period.

Part 2 of the interview deals with Mexican horror cinema.

Do you feel this content is inappropriate or infringes upon your rights? Click here to report it, or see our DMCA policy.
35mmCineteca NacionalHorrorJose Luis OrtegaMasacre en Xoco 2013Mauricio Matamoros