Fernando Toste
Contributor; Brazil
Sign-In to Vote
Tweet Post Submit
Every other Thursday it's the same thing: you try to clear a couple of hours of your schedule, pick up a big cup of coffee, sit in front of your computer and start refreshing the same page over and over again until the drop happens. Most often than not, it's a frustrating experience, because you're competing with hundreds and hundreds of Mondo fans all over the world to get that limited screenprint and if you're not fast enough - and even if you are - you may have to head over to eBay and pray for not having to sell your house to afford the piece you are after.

Collecting Mondo prints is tough and it can be a heartbreaking experience for most people - but also very rewarding, and not only when you get lucky in that one drop. One of the things I learned in the last seven years I've been following Mondo's output is if you happen to have a peculiar taste in films and art (and chances are that you do, being a ScreenAnarchy reader), you may be able to pick up some incredible stuff in the secondary market without having to spend thousands of bucks.

Here's a selection of 13 awesome Mondo prints that you can get for under $100 on eBay or on online collector's communities. It is a list heavily based on my personal taste, but I tried to include something for everyone - I trust that it may work as a gift guide or a good starting point for a potential collector. It lacks a good deal of great pieces by wonderful artists (Laurent Durieux, Mike Mitchell, Jason Edmiston, Francesco Francavilla and others), but I strongly encourage you to check out Mondo Archive for more. Enjoy! 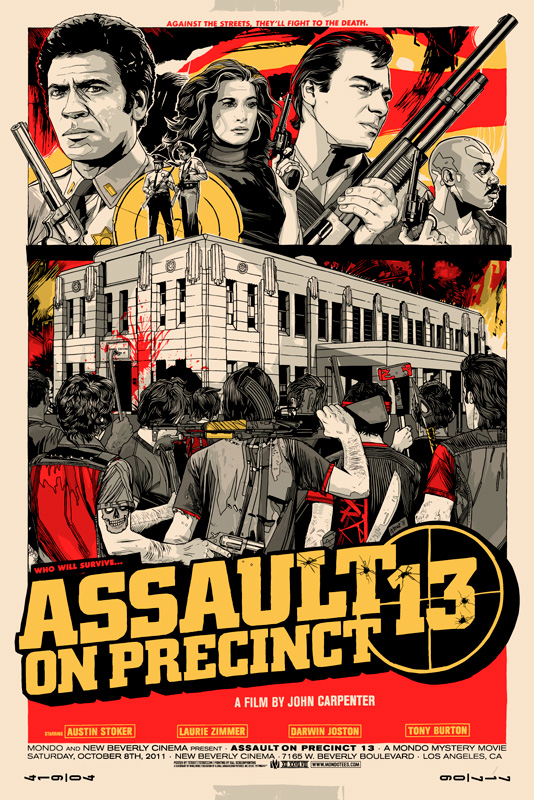 If you ever heard of Mondo, chances are you've already heard of Tyler Stout too. It's like they grew up together: his collaboration with the company go way back to the early stages of the business - a time when, believe it or not, you would have hours or even an entire day to pick up a Stout print on Mondo's site. Things have changed quite a bit, but if you are a fan of John Carpenter's exploitation masterpiece Assault on Precinct 13, I have some good news. If you put a little effort to it, there's a good chance you may be able to score this great piece, one of my personal favorites by Stout, for close to the original price tag. 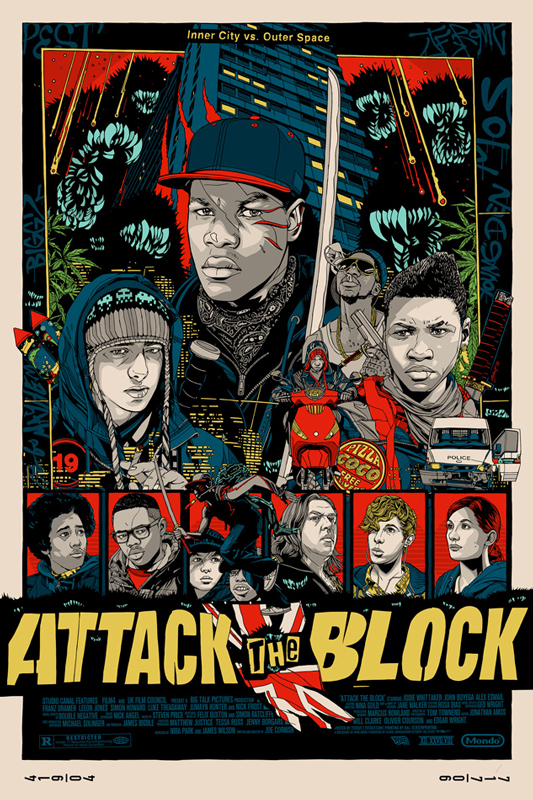 During the last edition of SXSW, Mondo honored two of its biggest stars (Stout and Ken Taylor) with a gallery show that attracted a big crowd of fans and flippers alike who were willing to sleep in line to get first dibs at the new and exclusive prints. A lot of people were frustrated by Stout's "odd" choices in subject matter though (what? no 80's classics?) and thank God for that, because this fantastic print for Attack the Block can now be acquired in the secondary market for a fraction of what Tyler's prints usually go for in the secondary market.

This one left a good amount of fans and flippers scratching their heads in absolute confusion. It was also part of the Stout/Taylor show and allegedly one of Stout's favorites - and if you happen to be a fan of Jacques Audiard’s film, you can understand why he picked it. Oh, and you can buy one for under cost now! 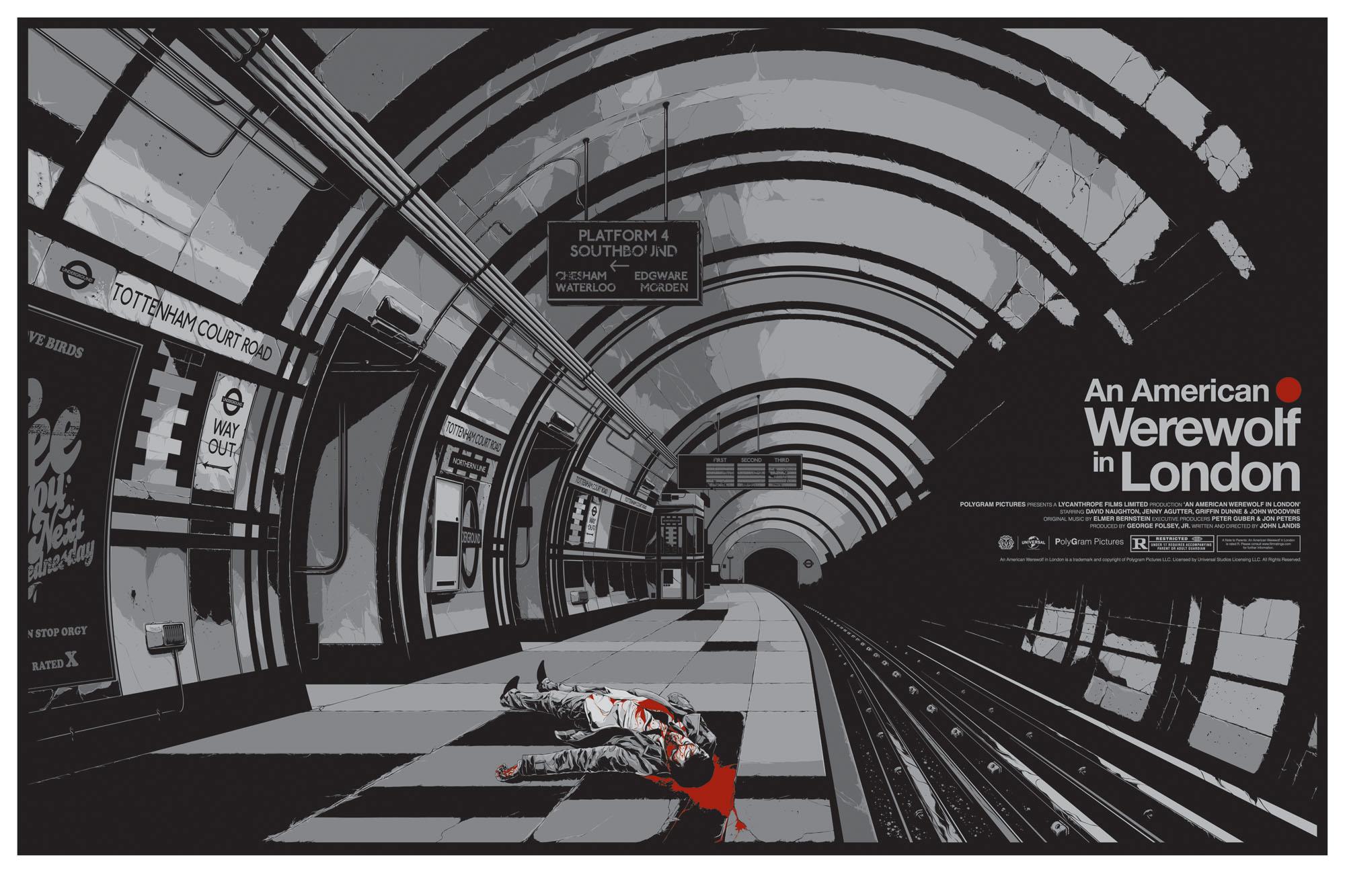 One of Mondo's signature artists, Aussie Ken Taylor has an absolutely amazing career doing gig posters for bands such as Pixies, Sigur Ros and Pearl Jam. He is the undisputed master of metallic inks and his take on John Landis horror/comedy masterpiece for his Mondo gallery show, bold and elegant at the same time, is a great showcase of his design and illustration skills. 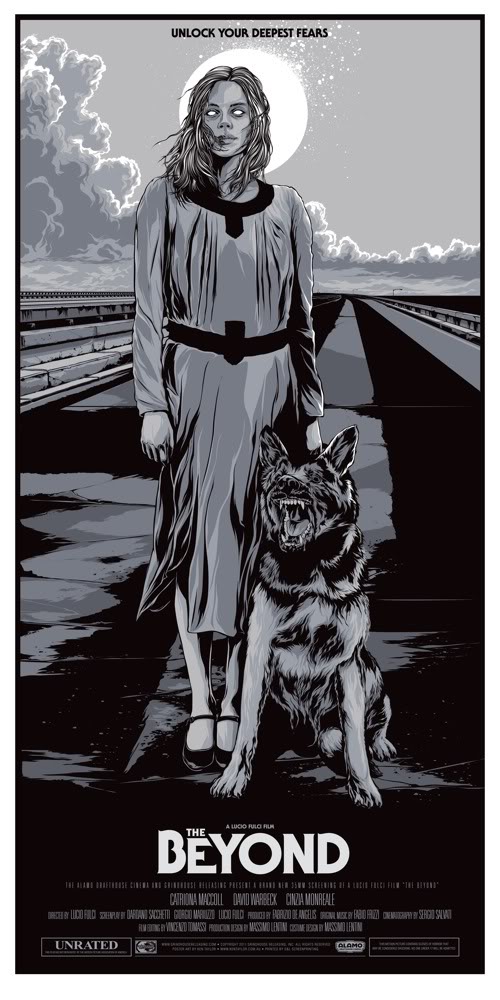 The Beyond - Ken Taylor
Average Price: $75

Here’s another awesome print by Taylor that shows his fantastic use of metallics – no picture will do justice to it, but trust me, if you see this thing up close and personal you’ll definitely have your mind blown. Part of a Lucio Fulci series released by Mondo during Fantastic Fest 2011, this print is not too easy to find (it’s an edition of only 270, plus 90 variants), but it usually sells for no more than $80 on eBay. 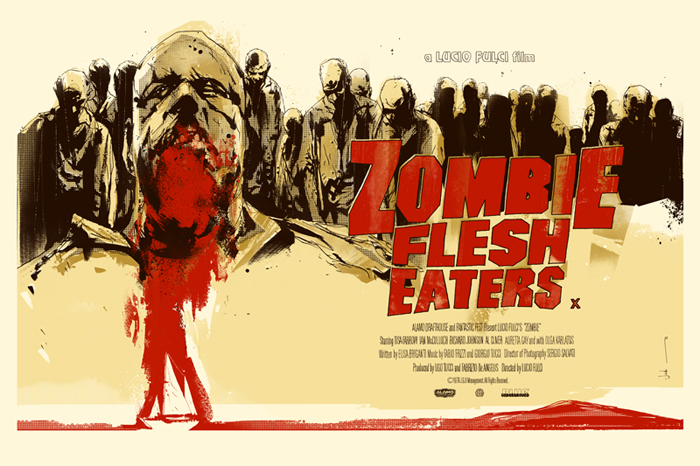 A rising star in Mondo's pantheon, Jock is catching steam in the print community with a sequence of truly amazing art, including what may be his best print yet, John Carpenter’s Halloween, released just a few weeks ago. He was already a big name in comic books when he collaborated with Mondo for this print for Fulci’s gore-fest Zombie, also released during Fantastic Fest 2011. A few copies of the AP edition are still available online, both for the regular and the UK Quad variant (pictured above). 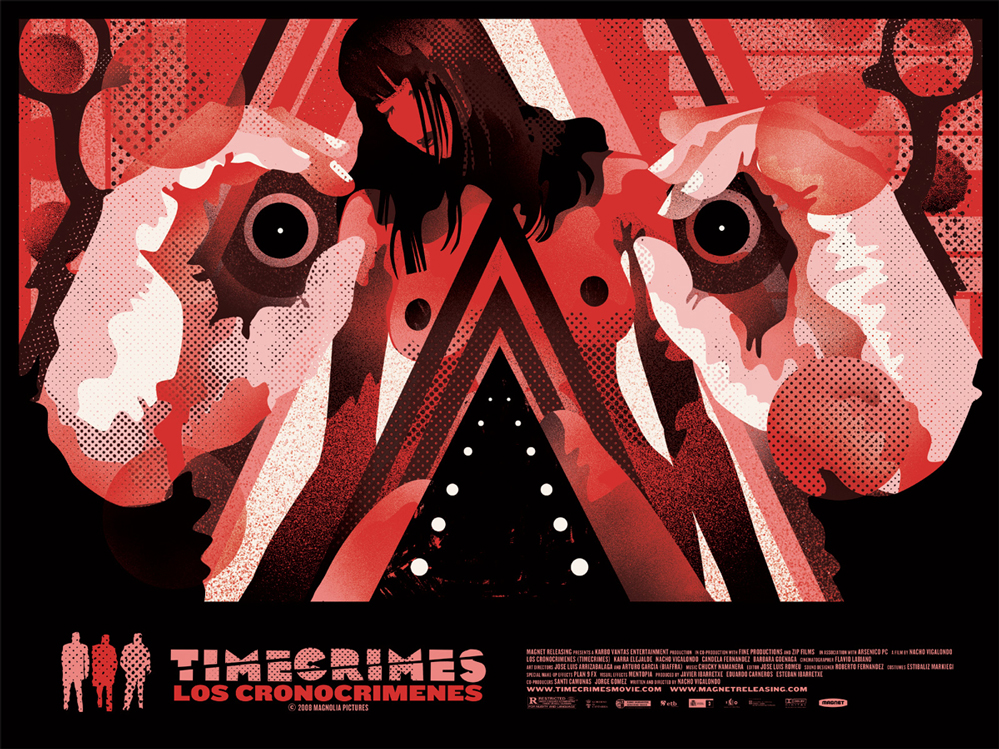 Speaking of Fantastic Fest, how can you not be reminded of Nacho Vigalondo? His time travel thriller Timecrimes was a big hit in the 2007 edition of the festival, where it was selected as the best film by both the jury and the audience. In Fantastic Fest 2013, Mondo released Eugenio Mira’s soundtrack on vinyl with album packaging art by Australian duo We Buy Your Kids, whom also designed the amazing print you see above. 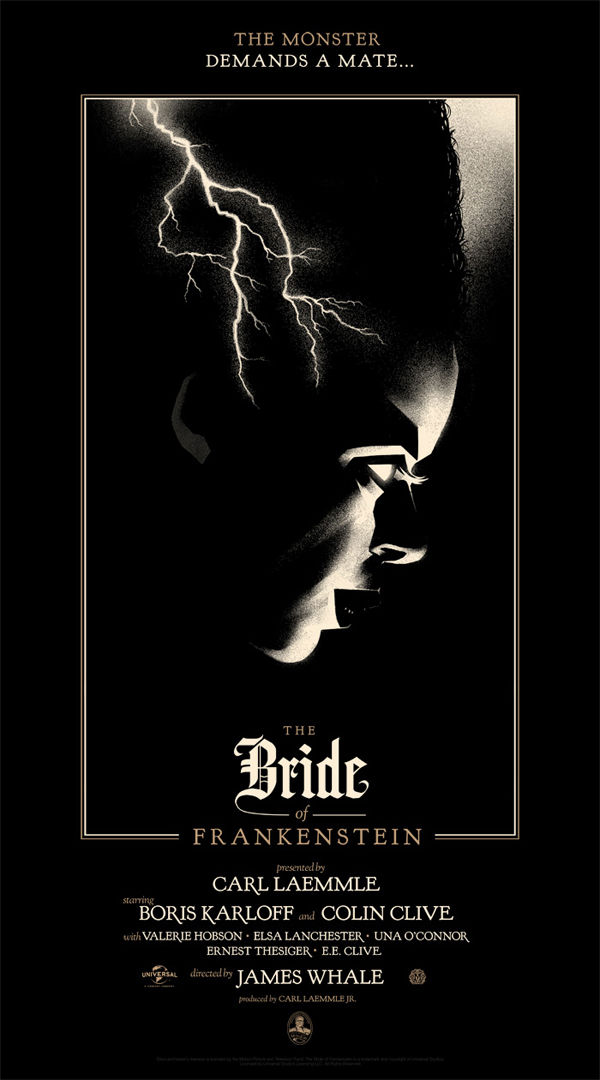 The genius of British artist Olly Moss can be measured in numbers: just try to put your hands on his print for Evil Dead without spending at least $1,500 or try to shake loose a Star Wars original trilogy set for less than $6,000 and you’ll see what I mean. He is responsible for some of the most iconic Mondo art ever released and yet, somehow, his classy take on James Whale’s masterpiece, printed on black stock paper, can be found in the aftermarket for under $100. I would bet another $100 that this will change pretty soon though. 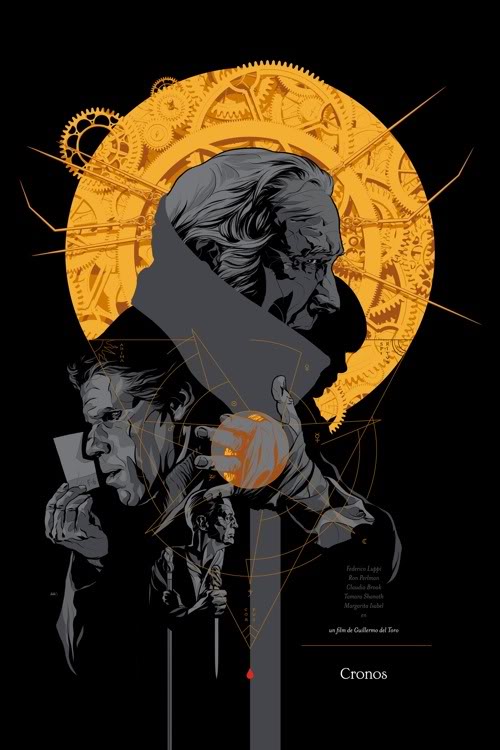 There is just no way you can leave the name Martin Ansin out of a Mondo list – and thankfully, his beautiful print for Guillermo Del Toro’s debut feature is one of the rare posters designed by the Uruguayan artist that you can find for less than $100 (unlike, say, this terrific rendition of Bride of Frankenstein, that you’d have to cough up north of $2K to put it on your wall). 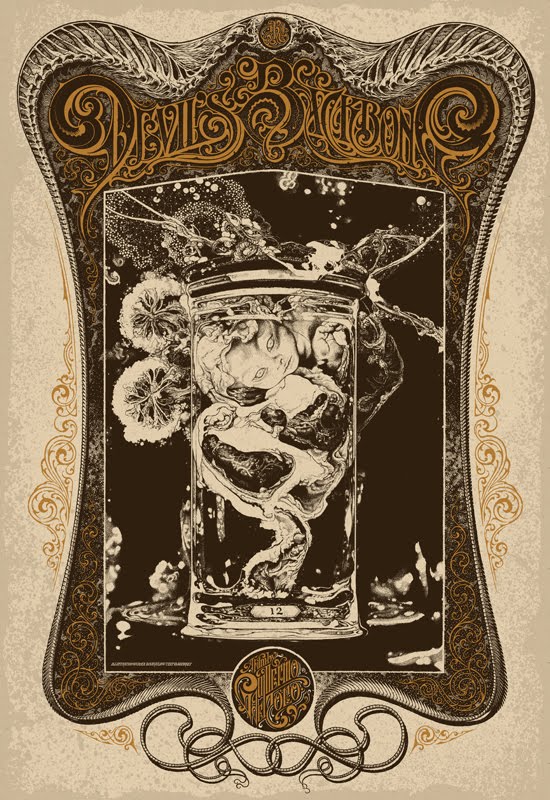 Mondo has released prints for all of Del Toro’s films during the years, and this collaboration of Russian illustrator Vania Zouravliov and Aaron Horkey is one the best in my book. The one pictured above is the regular edition and the most affordable (there was one sold for less than $50 on eBay less than a month ago), but there are also two variants in different colorways (red and gray). 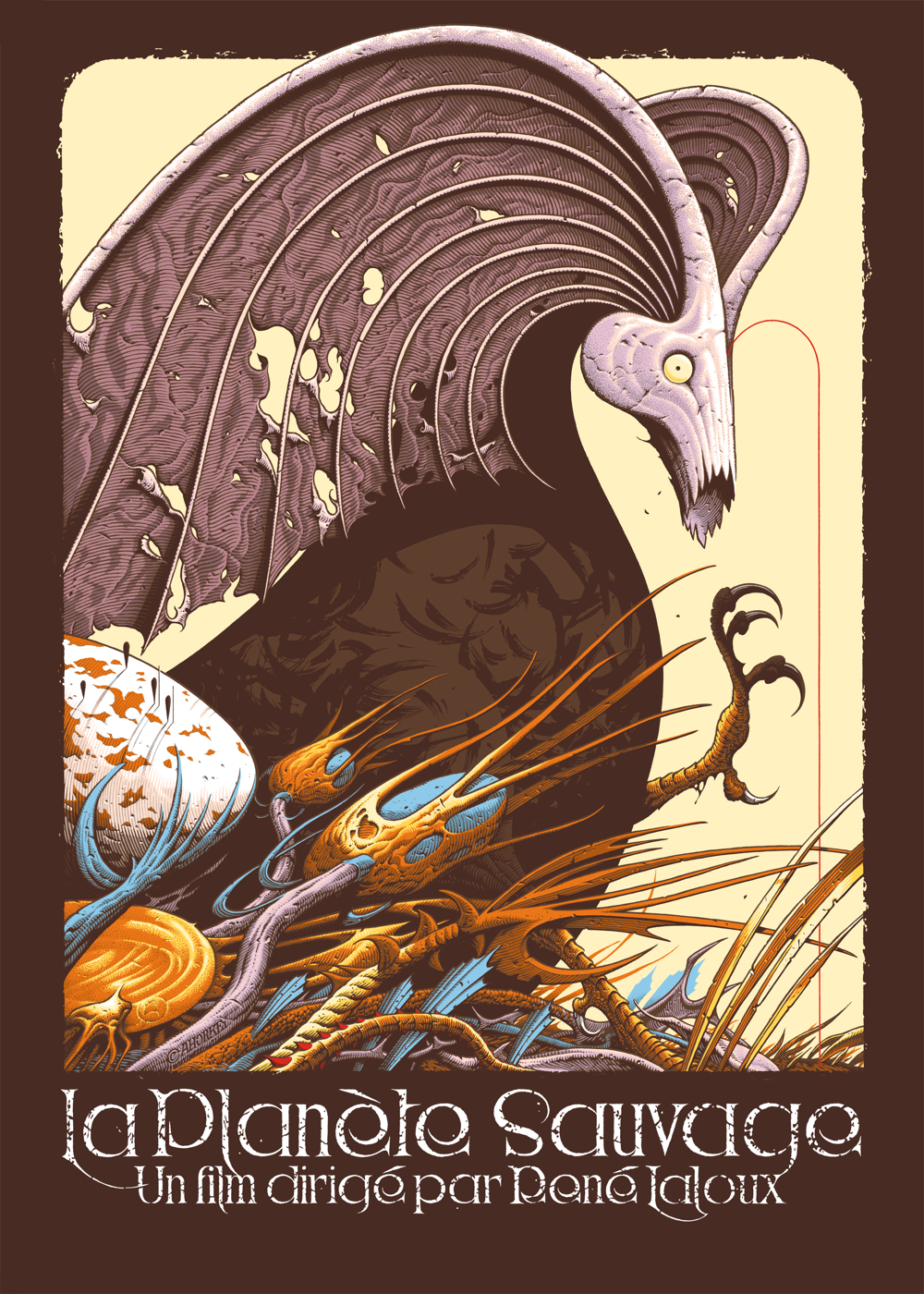 A legend in his field, Aaron Horkey has put up some mind blowing work for Mondo lately, including his take on There Will Be Blood, easily one of the hottest prints of the year - and one that you'll probably have to sell a kidney to afford. His unique approach to the classic but underseen psychedelic animation by René Laloux, Fantastic Planet, is a sight to behold and a wonderful display of the artist's mad illustration skills. Two of those beautiful 11-color screenprints were sold not long ago on eBay for less than $60.

I’m always in awe of Vania Zouravliov’s art for Mondo. His breathtaking print for Takashi Miike’s samurai epic 13 Assassins is easily one of the most underrated Mondo posters ever and would fit perfectly on the wall of any fan of the genre. There are a total of 360 copies of this one available in three different colorways, 120 of each: white (as seen above), gold and blue. 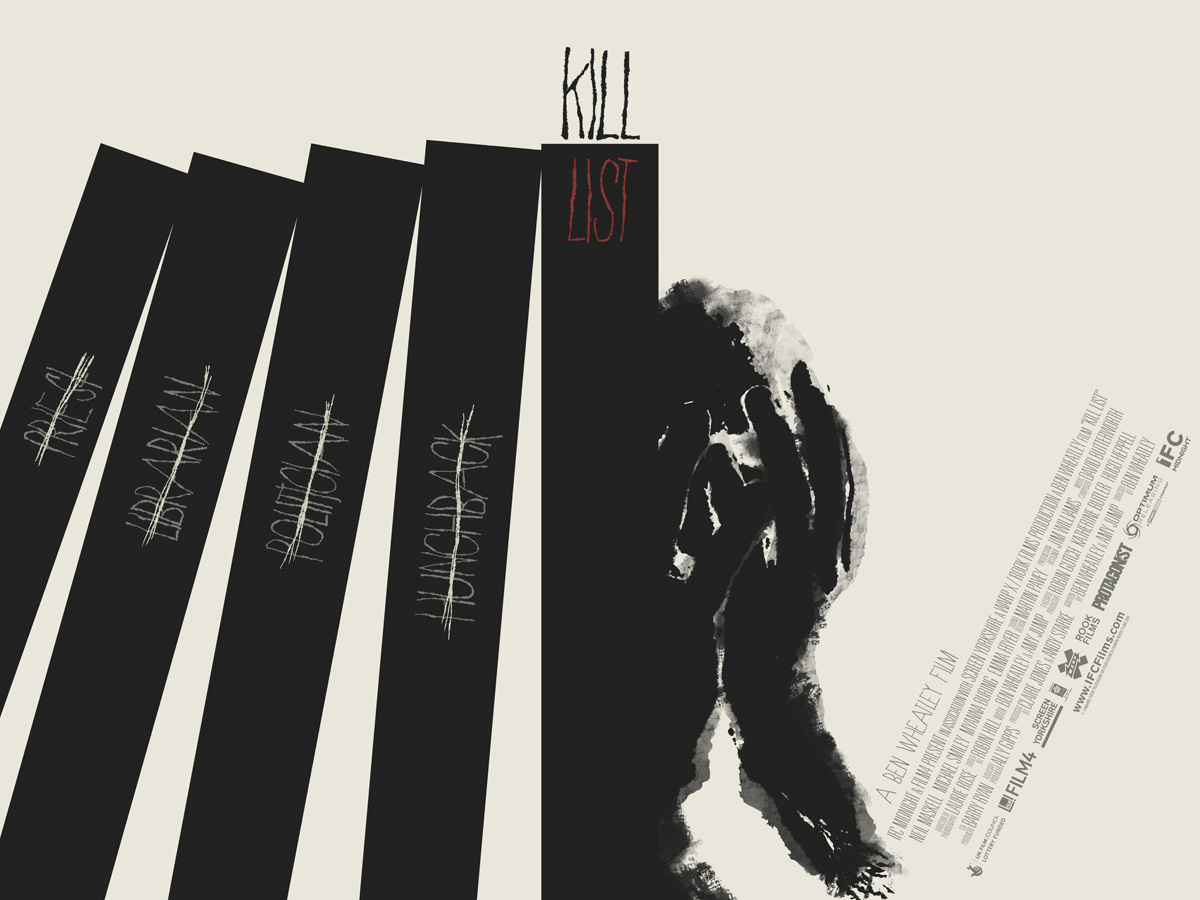 One of the hardest working men among Mondo’s collaborators, Jay Shaw has put together an impressive list of prints for the company – he’s also the go-to guy for Drafthouse Films releases and, as the company grows, so does his work. His art may lack whatever fanboys look for in prints, but Shaw is unquestionable a unique poster artist and I for one am glad to see his talent supported by Mondo. This print for Ben Wheatley’s Kill List is one of my favorites and a very nice interpretation of the film.