Review: NARCO CULTURA, A Collision Between Drugs, Music, And Murder 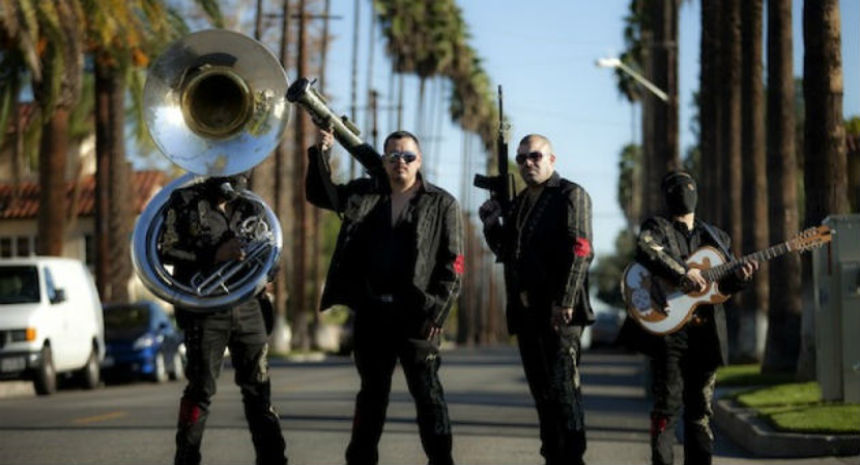 It's all fun and games until your children are murdered in the street.

A blood-boiling documentary, Narco Cultura explores the intersection of mass murder and pop culture in Ciudad Juárez, Mexico, where the murder toll skyrocketed tenfold from 2007 to 2010. The tremendous increase in homicides is laid at the feet of the Mexican government's declaration of war upon drug cartels in 2006, and the subsequent battle for territory instigated by the most powerful cartel in the country.

It's a city where crime scene investigators are compelled to wear masks while carrying out their duties in public, for fear that the murderers will take revenge. It's a genuine, growing concern; in one police unit, three of Richi Soto's colleagues have already been gunned down, either on their way home or on their way to work.

Richi serves as one of the focal points for the documentary, directed in an artful and acute manner by Shaul Schwarz. Born in Juárez, Richi loves the city, which is the only place he has ever known. Now 34 years of age, he still lives in the same room in the same house where he grew up with his family. He dreams of moving to El Paso, a scant few miles across the border between Mexico and the United States, but in the meantime he does his job with a pragmatic perspective, wary of the mortal dangers that abound in his city.

A thousand miles away, Edgar composes and sings narcocorridos (drug ballads), with lyrics filled with details taken from real-life exploits. Having served time in prison, Edgar only wants to provide for his family, yet his sympathies lie with the criminals whose exploits he is happy to celebrate. And the public agrees: his songs resonate with everyone who looks upon those involved in the drug trade as heroes, rebels against the system, characters to be emulated.

Narco Cultura expands to show the expansive influence of the drug culture on everyday life, contrasting the glamorous musical lifestyle with the desperate situation of citizens who have lost faith in the police and the government, and the despair expressed by police officers that anything can and will change. Corruption runs rampant and feeds upon itself; the authorities are compromised, either by fear and/or greed, and so few, if any, murders have been solved and the guilty brought to justice. When the cartels tell police and government officials to back off a case or resign, it's not a threat, it's a promise that a death sentence will be executed swiftly and without fear of retribution

Schwarz covers many bases in order to present a fair-minded expose and endeavors to be as even-handed as possible. After all, the celebration of evil is nothing new to the culture of mankind, as sickening and disheartening and discouraging as it is to observe here. The film is completely absorbing, and thus inspires another layer of contradictory feelings. It's stylish and visually appealing; Schwarz clearly has an eye for arresting imagery. Yet it's unflinching in its portrayal of the brutal violence that has been visited upon thousands of people, young and old, guilty and innocent, the anguished and the weary.

Narco Cultura is easy to watch, painful to contemplate, and impossible to dismiss.

Review originally published during Fantastic Fest in September 2013, where Shaul Schwarz, received the Best Director award for documentary features. The film will open in select theaters in the U.S. on Friday, November 22. Visit the official site for more information.