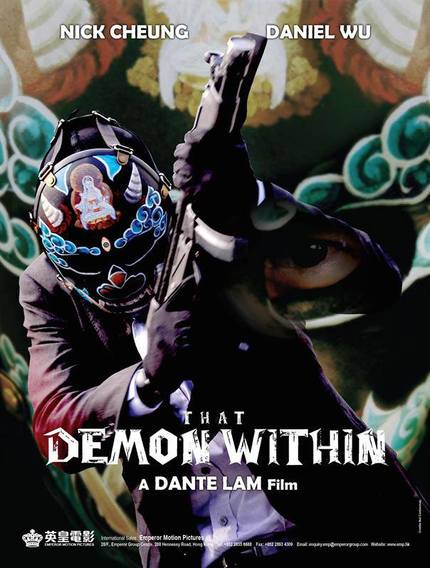 Good news for fans of Hong Kong action maestro Dante Lam with word that China Lion has taken North American and Australia / New Zealand rights for his upcoming crime thriller That Demon Within, meaning we should see a day and date theatrical release in the USA, Canada, Australia and New Zealand timed to the Hong Kong release. Lam has firmly established himself as one of the finest action directors in the world today with a string of quality releases over the last few years so this should be welcome news for fans. Now if only we had a trailer.

November 13th, 2013 - Los Angeles, California - [For Immediate Release] China Lion Film Distribution announced today that it has acquired and will release Dante Lam's That Demon Within in the U.S. and Canada, as well as Australia and New Zealand.  The film features Chinese stars Daniel Wu, who has been featured in over 60 films and has won Golden Horse Awards for acting (New Police Story) and directing (The Heavenly Kings), and Nick Cheung, who has starred in Lam's previous film The Beast Stalker, which won him international acclaim, and who was nominated for a Golden Horse Award for his performance in Lam's recently released highly-acclaimed Unbeatable.

That Demon Within follows a dutiful Hong Kong policeman who saves the life of a betrayed gang leader.  The policeman joins forces with the gang leader, engineering a plan to shut the gang down, but soon finds himself on the run from the law, wanted for murder.

China Lion Film will release That Demon Within in major metro areas throughout both North America and Australia and New Zealand, continuing the trend of releasing Lam's films day-and-date with China; specific release locations and dates will be announced.  China Lion Film Distribution previously released Lam's The Viral Factor, starring Jay Chou and Nicholas Tse, which stands as one of the company's most successful films.  Dante Lam has also directed numerous other blockbusters, including The Twins Effect and The Beast Stalker, both of which made him a household name throughout Asia.