ZERO CHARISMA, THE GUILD, And The Odd Sensation Of Nerd Envy

If I wanted to be really fancy and insufferable, I might start by remarking how interesting it was to catch Andrew Matthews and Katie Graham's Zero Charisma at New York Comic Con earlier this month: screening a film about gamers and geeks to an audience of gamers and geeks, with all the attendant potential for reflexiveness and blah, blah, blah.
Except that would be a lie -- there wasn't much worth noting in that respect, at least not during the screening itself. The audience responded to the expert mix of goofy comedy and serious comedy as any demographic of the young and the smart might, and I have no way of knowing if its members "saw themselves" on the screen. Maybe that's because I was too busy being shocked at my own reflection up there. And I'm not remotely a gamer.

To clarify, it's not just that Zero Charisma features a protagonist (played masterfully by Sam Eidson) who serves as a kind of cautionary figure in terms of how real life can evade those of us who spend so much time in the imaginary. Rather, it's the purity of his devotion that both strikes us and distinguishes him from the other characters--it speaks to a brand of orthodoxy that can be found wherever culture, pop or otherwise, is present. This character, Scott, has so much of his sense of self wrapped up in what is, by definition, a communal activity--gaming--that, paradoxically, he slowly drains all the true fellowship from it. Yet even now, in thinking about all the maladaptive aspects of Scott's personality, I can't help but identify with him. That's because the overt silliness of his obsessions masks an underlying psychological truth that's by no means limited to gamers: the validation of self-worth via controlling others and the need to be right. 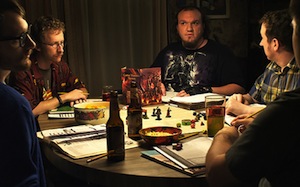 Scott's inability to compromise also helps him function as a fixed vantage point from which we survey a range of similar characters who model alternate ways of bridging reality and nerdality. This spectrum spans all the way from one buddy who exits early because of marital problems to those who earn a living, and even a modest sort of fame, from gaming. Standing somewhat apart from all of these, and ultimately acting as Scott's nemesis, is Miles, the self-assured über-geek whose charm and real life cred makes him a kind of idealized audience surrogate: this is how I'd be, we say to ourselves, if I were forced to interact with these lovable losers. However, it's a measure of the complexity of Matthews' script that Miles is increasingly problematized to the point where he's depicted as a two-faced hipster, one who's actually ashamed of his nerd buddies and, by extension, of his own inner nerdiness.

Of course the opposite of this, the overthrow of shame by geek pride, has occupied a thematic swath of pop culture over the past several years, and finds a notable expression in the web series The Guild. Although it concerns the kind of online RPGers that Scott puts down for their lack of creative authorship, The Guild's affirmation of its subculture is so effective that even when the characters are at their most dorky, it's an endearing dorkiness--the gamer community as sitcom fodder (as opposed to black comedy à la Zero Charisma).

In fact, from the episodes that I've sampled, The Guild is more fun, more inventive, and more keenly observed than most recent sitcoms on broadcast TV. Why did I avoid it, then, until now? One reason: I'm a snob. In this case that means that it took a home video release to get me past the perception that webisodes are anything more than amateurish ephemera. Yeah, I'm a decade behind the times, I realize, but at least my belated catching up has allowed me to notice the major overlap that The Guild enjoys with Zero Charisma: the recurring intrusion of the real world into the alt-world where the characters take refuge. Family, romance, job--take your pick, they're all just hovering there in the wings, waiting to interrupt gameplay. 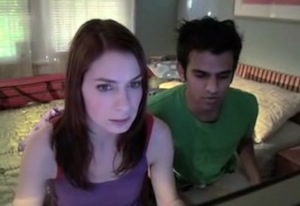 But if The Guild uses such "RL" elements to point out that, hey, RPG'ers are people, too, just like everyone else, Zero Charisma takes this many steps further by saying that in effect we're all RPG'ers. That is, we all play roles in life that echo the power struggles, strategic thinking, and tests of loyalty and resolve that gaming itself appears to require. One of the wonderful ironies of Zero Charisma is that as Scott's life seems to tank, there's no transference of the gamemaster ethos that should empower him, at least a little bit (e.g., creativity, dedication, hard work). Indeed, if the film had presented a condescending lesson such as "Nerds need to get out more" or "See how unhealthy gaming is," then Miles wouldn't have sported all those disturbing edges, and the script would have worked a lot harder at "redeeming" Sam.

In this way, by using the world of tabletop RPG to explore broader issues related to the interface of reality and escapism, ZC couldn't help but put me in mind of film fandom. And the result, though it may point mostly to my own alienation from the group in which I'm ostensibly a member, is an unexpected wistfulness. I look at all the one-to-one relationships in the gaming community, at all the rich interaction (for better or worse), and wonder who I know that would care enough to manipulate me or my peers like Scott does. So I guess that's an example of not seeing a reflection of myself or my world when watching Zero Charisma, and that's somehow more disturbing. Of course cinephiles must work to achieve the same sense of community that comes naturally to gamers because of the simple truism that, well, the latter are, after all, playing together.

Still, in the end, is this possibly the ultimate revenge of the nerds--that one might feel envious of them?

Zero Charisma is currently available in the U.S. on VOD platforms such as iTunes and Amazon. The Guild Full series Megaset is now on DVD.