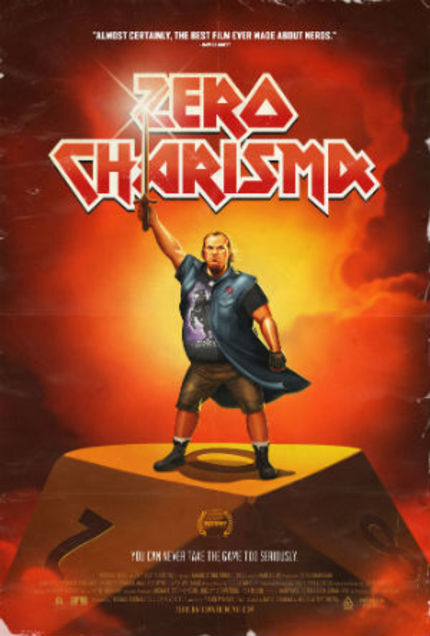 Zero Charisma is probably the most realistic portrayal of the alienation of the adult nerd that I've ever seen on screen.

I had four friends when I was in high school. Brendon, Jagjeet, Ryan, Nick, and I met in junior high. We had nothing in common culturally, our families were all from different ends of the Earth, but we were all smart kids who hated "normals" and preferred each other's company to that of the popular crowd, or at least that's the way I looked at it.

I suppose the reality of the situation was that the popular crowd looked right through us and we just banded together as a defense mechanism. In any case, we bonded pretty hard in those early years. We were the kind of nerds who'd hang around at each other's houses after school cramming for tests or sitting around watching the endless reruns of Monty Python's Flying Circus, The Kids in the Hall, The State, or The Vacant Lot on Comedy Central back when people still watched sketch comedy. That was on school days. On weekend nights, it was a whole other story...

Dungeons and Dragons, the final delineating factor that separated the nerds from, well, everyone else. Friday nights (and well into Saturday mornings) were often reserved for marathon games of D&D. We'd all show up around 7 or 8 and prepare our provisions, Orange Soda, potato chips, and the like, before getting into the meat of the game later in the evening. From ten in the evening until somewhere around 6 in the morning, often with a built in break for a donut run around 3 AM, we'd venture through worlds that don't exist, killing creatures that don't exist, in order to save some princess/medallion/spell/crystals that don't exist. This was our little secret. As generally unpopular as we were in those early years, we didn't need to compound it with the inevitable stigma attached to such a decidedly nerdy pursuit.

While my friends and I wandered away not only from our late night gaming, but also from one another as we neared the end of high school, this is not the case for everyone. Case in point: Zero Charisma's Scott (Sam Eidson), who bears an uncanny resemblance both in personality and physical appearance to one of my above-mentioned friends. Scott is a thirty something semi-employed nerd who lives at home with his grandmother and lives, LIVES, for his weekly RPG. he takes it very seriously. Scott is the game master, which means that what he says goes, and his epic saga, three years in the making, is his magnum opus. Scott is unpopular with the ladies, by choice if you ask him, and quickly losing ground with his friends/devotees who are beginning to grow weary of his didactic approach to what is, in reality, just a game.

Scott's reign of self-imposed and self-realized superiority over his nerd minions comes into question when a new player, Miles, joins the game and purports to have the answers to all of Scott's little tricks. What follows is Scott's regression into childhood, Miles's rise to authority as he tends to the hurt emotions of the gamers, and a complete loss of contact with reality. The battle between nerds and geeks is on, and in this war, nobody wins.

As I mentioned, Zero Charisma is probably the most realistic portrayal of the alienation of the adult nerd that I've ever seen on screen. Scott's inner world dominates the reality around him, to the point that he retreats into his room at any sign of the outside world intruding into his domain. His conflict with Miles, a popular geek who has a beautiful girlfriend and writes for an influential geek culture blog, is representative of the modern internet-fueled war between nerds and geeks. Today it's easy to be a geek, thirty minutes of research on Wikipedia and anyone can be an armchair expert on comic books, science fiction, or role playing games; Scott comes from the old school where that knowledge came at a price, often the complete neglect of one's social standing.

Now, Scott is not more noble for his sacrifices, all it means is that he's taken what is essentially an inability to socialize and turned it from a minus to a plus in a world where he can not only survive, but thrive. That is the essential difference between nerds and geeks; nerds are most often fundamentally unable to function socially beyond a very small core of like-minded individuals, whereas geeks use their knowledge to expand their social circle and function in a broader world. I consider myself a nerd, I'm painfully awkward around strangers, and I've only really been able to build a social circle around like-minded individuals thanks to the internet. I come from a pre-Internet age, so does Scott, and he likes it that way.

The problem, which Zero Charisma very adeptly outlines, is that this kind of isolation can't last forever. It is a block to maturation, it's not unlike the forced childhood of Oskar in Volker Schlondorff's The Tin Drum, it's forced immaturity that one uses to absolve themselves of the responsibility of growing up. Without some kind of catalyst, Scott would surely have lived well past his forties with the same gang, doing the same thing, and not seeing any need for change. When he finally decides to confront Miles, who has usurped his gaming crew, it gets ugly, and ugly in a way that I've seen happen on more than one occasion. This is the straw that breaks Scott's voluntary infantilism, and he finally snaps and wakes into a reality that, while not perfect, is managable. He's not a pariah unless he chooses to be one, and it's that realization, the realization that it's all within his grasp, that finally allows him to blossom.

Directed by Katie Graham and Andrew Matthews from an original screenplay by Matthews, Zero Charisma is a feel-good film about one man's descent into his own personal hell that just happens to have a happy ending. This is a film that expertly observes the plight of the American gaming nerd, and draws it out to its logical extremes. While the film is frequently laugh-out-loud hilarious, it is also sensitive to this character who just needs a little push and acceptance. He is aware of his predicament, but needs a swift kick in the ass to make a difference in his own life, and it works beautifully. Sometimes we all need that kick.