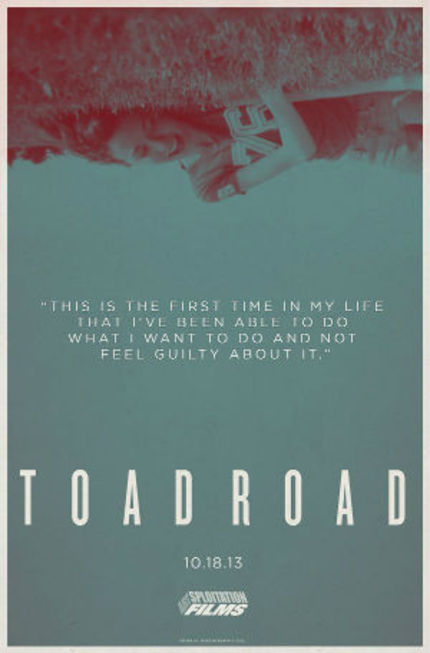 In the tradition of mashing sub-genres together to get something entirely new and interesting, full credit goes to micro-indie avant garde chiller Toad Road for merging the wasted youth drug drama with the urban-legend horror flick.

The experience of watching this quite vérité experiment is akin to taking the essence of Drugstore Cowboy and infusing it into the broth of The Blair Witch Project whilst dropping a mint-leaf of Picnic at Hanging Rock on the side for garnish. Using the syntax of losing oneself of those campfire wilderness spook stories as a metaphor for ever increasing drug use is wonderful in both concept and execution.

Sara is the bright young thing, ripe as a peach and innocent to a degree who is played by Sara Anne Jones, a NYC model with real acting chops. She starts hanging out romantically with James (James Davison) and thus, incidentally, with his circle of druggie pals. Initially she abstains from using, content to watch them horse around with each other when they are high which consists, I suppose, of the usual stuff. You know, they make out, puke, fall down stairs, pull a condom through their nostrils out of their mouth and light each other's pubic hair on fire for kicks. The suggestion of drug use and sex is palpable.

Slowly, Sara's curiosity gets the better of her and she uses some light substances, the so-called 'gateway drugs'; albeit with all the excessive drinking going on, perhaps at 17 or whatever, all of us are through the first 'gate' anyway. In the meantime, during daylight hours, her relationship with Jason continues to develop in the dreamy but fun sort of way that many fantasize first love might be.

The contrast between jackass level group mayhem on the drug binges and the casual and positive intimacy with their alone-ness is the first hook the film film as to offer. Even if you think these characters are initially vapid or douchey (one of James' friends attempts to emotionally guilt Sara into a sexual encounter is nevertheless particularly well achieved) or find the few instances of exposition a tad clunky, you can tell there is some serious filmmaking happening by the intentional contrast of tone and aesthetic.

Eventually James tells Sara the story of Toad Road, and the seven gates, each one more scary and disturbing on the way to an old abandoned mental asylum in the middle of a dense patch of Pennsylvania (or is it Maryland?) woodlands. As you go through each gate, you get more disoriented, isolated from folks, and time begins to lose all meaning?

Sound familiar? The last gate leads to hell. As Sara starts down both paths (both the drugs and the Road), she goes from innocent outsider to Timothy Leary pilgrim ("It has been pushing me and I've been letting it. I'm doing this because I need to") and the Toad Road is her altered state. When a character says that "you will wake up places you have never been" it is meant literally and evocatively. Sara's response to a now worried and protective James, "I am this close, come with me or stay behind."

After this is all established and laid out before you, around the halfway mark, and the Stalker-esque journey into the strange woods begins, the film has its claws dug and like a bad trip you cannot look away from the consequences to Sara and James and the dissolution of everything. For all the easy moralizing of more conventional drug dramas, Toad Road offers a surprisingly similar morality in a decidedly more arty package. A twist here is that the film for its entirety is from the point of view James, the experienced user, and not Sara, and this offers some interesting possibilities that are somewhat seized in the closing act mystery which is complicated by James' youthful impulse to just run away.

Jason Banker's film was, I believe, mostly shot without a script. A lot of the drug use by the kids is ad lib and improvised. The result is grungy and ugly and intimate and raw and a little unfocused. Jonathan Caouette is thanked in the credits and while this doesn't resemble his DIY Tarnation, one can perhaps detect that things come from a similar scene. Yet there are also many punctuation marks where the Canon5D cinematography achieves a romantic nostalgia.

The ambient soundtrack from Dag Rosenqvist and Rutger Zudervelt is unobtrusive until it needs to be and is wonderful way to stumble to the door after the film's 76 minutes are played out You might need a lifeline back to reality.

Review originally published during Fantasia in July 2012. The film opens in Los Angeles at the Arena Cinema on Friday, October 18; in New York at Cinema Village on October 25, and in Miami at AMC Aventura 24 on November 1. Visit the Artsploitation website or the official Facebook page for more information.