Review: THE DIRTIES Is One Of The Smartest, Most Empathetic Looks At School Violence In All Of Cinema

Can you laugh with the boy holding the gun?

The short answer is, "Yes."

The slightly longer answer is, "Quite a lot, but with a hell of a caveat."

And the longest answer is the rest of this review.

Looking like the freshest-faced 16-year old you could imagine, Canadian filmmaker Matt Johnson crab-walked, moon-walked -- or maybe he was doing the robot -- onto the internet scene with the out-there, faux-documentary web series Nirvana The Band The Show. The Dirties is his first feature, in which he also stars as... Matt Johnson.

Matt and his buddy Owen Williams (Owen Williams) play high school film geeks who are the target of a group of bullies they dub 'The Dirties.' As a way to cope with the abuse the boys decide to make a fantasy revenge film starring themselves as a pair of elite cops/assassins/secret-agents/badasses. Their mission: To once and for all end the reign of terror caused by The Dirties.

Their movie itself, and everything around the making of it, is captured by their fellow student filmmakers, a small group who are completely complacent to what the lads are doing. They are near absolute flies on the wall, merely our eyes and ears, rarely, acknowledged by Matt and Owen as being behind the camera.

As laughably bad as the boys' movie may be, it is a project full of passion and invention. For them this is the greatest in-joke ever. Matt revels in every aspect, gleefully bouncing from roles behind the camera and in front of it, with Owen quietly following his pal along this dark comic path. These are the kinds of movies teenagers make who are able to have whole conversations cobbled together from The Simpsons quotes. Matt is not afraid to make a fool of himself, deflecting any pain he may hold with an over-the-topness that is as infectious as it can be annoying. In other words, this was me as a kid. Matt lines his walls with Marvel Comics, Magic: The Gathering cards and every kind of movie poster imaginable. On the TV: Mario Kart 64. His mantle is decked out with Nina Turtles action figures and vehicles. This is a mecca of geekdom, a place of respite from the hellish hallways at school. This then is our childhood in all its pop culture glory and terrifyingly isolating behaviors. Matt is media obsessed, with a plethora of knowledge and cinematic tropes that he is constantly referencing and filtering the world through. And though it is evident that he is a sly editor and crafty filmmaker it is hard to make the case that Matt is actually media literate. But that's not to say he isn't self-aware. He is. And that is the terrible tragedy at work here.

The screening of 'The Dirties' in the boys' film class is an absolute failure, leaving Matt distraught and disillusioned. But he remains determined, aiming for even greater things, and begins to plot out the sequel, only this time the deaths of The Dirties will be real. As he tells Owen, "Wouldn't it be great if we came into school with guns, and had t-shirts that said 'We're Only Here For The Bad Guys'?"

As Matt collects blueprints of the school, makes a proper whose-who list of The Dirties, and logs practice with a slew of heavy-duty firearms, Owen rekindles an elementary school friendship with Chrissy (Krista Madison), now one of the prettiest and most popular girls in school. At first, Matt encourages Owen's desires, coming up with hair-brained schemes such as Owen baking a cake and then running into the cafeteria with it and telling Chrissy he stole it from a home ec class. Though he obliges his friend's idea, Owen would rather work on his guitar skills. The Dirties then is as much a bromance coming to an end as it is anything else. 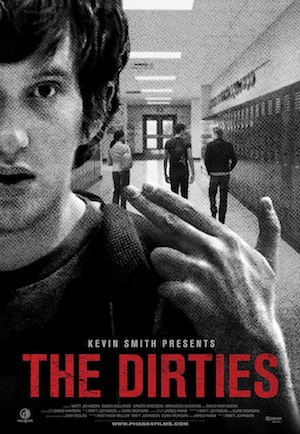 While the onscreen Matt Johnson may not be media literate, the real Matt Johnson and his small team (including co-writer/co-editor Evan Morgan and DP/producer Jared Raab) are astoundingly media literate. What they have done with The Dirties is something so fresh and so bizarre, something that is just as sincere as it is unsettling. For as genuinely hilarious as the film is, The Dirties is not a film that uses humor to outright provoke. It is far too smart for that. Yes, the film is effortlessly zany and goofy, brimming with the euphoria of youth, but it is also a surprisingly gentle and tender film that never condemns its characters to make a larger point on society. Even as we watch Matt step into school, a dufflebag full of weapons over his shoulder, it is hard to see him as an out and out monster.

And that's just it. Not only do we absolutely hold sympathy for these characters, but I can say personally I have empathy for them. Whenever a school shooting happens, the idea of a person (or people) committing an act of evil suddenly pushes aside the fact they are a flesh and blood human being. A whole lot more is going on there. The Dirties proves this better than any other movie that focuses on the subject of school shootings that I have ever seen. It doesn't want to accept that this is only a 'topical' subject.

We can change gun laws, we can make sure people get the psychiatric help they need, but until we accept that every single one of these young men who pick up a gun and choose to kill another person is a human being and not a monster, things will not change. Matt Johnson knows this. And he's ready to share his thoughts with mad style and intelligence.

Review originally published in a slightly different form during the Slamdance Film Festival in January 2013. The film opens in select U.S. theaters on Friday, October 4. Visit the official site for more information.