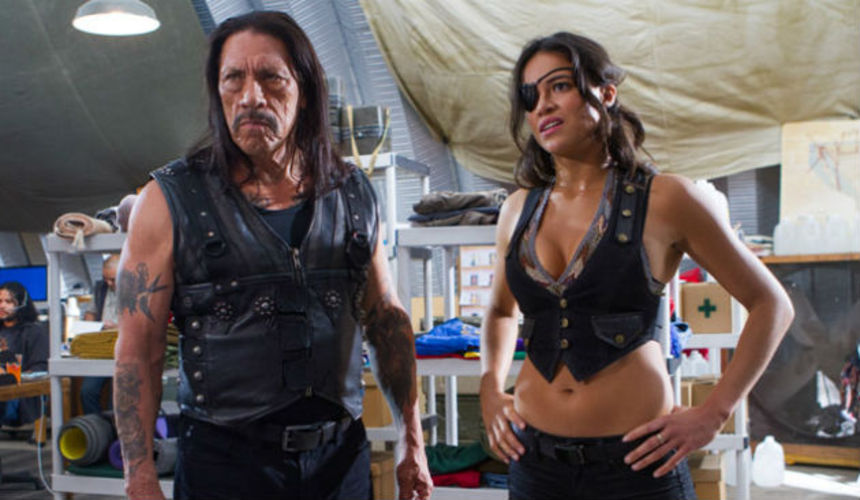 Self-aware, self-referential, and self-abusing, Machete Kills splatters a full load of gooey grindhouse goodness onto the screen even before the main titles roll.

Having turned the volume up to 11, however, that leaves more than 100 minutes to be filled with something, and so Robert Rodriguez and company have elected to do more of the same, stringing together bite-sized exploitation stand-bys -- beheadings, gushing blood, machine-gun brassieres, beheadings, martial arts performed by clones, a ticking bomb sewn to a human heart, beheadings, angry prostitutes, an undercover beauty queen, beheadings, Mexican jokes, Charlie Sheen as the U.S. President, Mel Gibson as a brilliant tech villain who claims he can see the future, and more beheadings -- and pretending that the plot matters one iota. (Note: It doesn't.)

Admittedly, Sheen and Gibson appear courtesy of another strategy, one considered alien to the grindhouse films that serve as inspiration / excuse for Rodriguez to wallow in the same pigpen he has already exploited to the full. That strategy is often employed by modern sequels, namely, the all-star cast of day players who appear in movies like this to show that they're good sports and/or really like the director. In that category we find Jessica Biel, Walton Goggins (here billed as "Walt" Goggins), Cuba Gooding Jr., Lady Gaga, and Antonio Banderas, among others. The "badass chica" quota overflows, with Michelle Rodriguez, Amber Heard, Sofia Vergara, and Alexa Vega on hand to fire guns, throw knives, bare various body parts, and dispense the f-word with great gusto.

Given that Rodriguez has built his entire career out of recyling ideas, it's definitely to his credit that Machete Kills manages to elicit occasional giggles out of amusingly outlandish set pieces and sight gags. The movie is constructed as a perpetual-motion machine, spitting out jokes, profanities, and cartoonish deaths at a rapid-fire pace that is not intended to allow time to think about what is unfolding, and with an unflagging rhythm that tends to wear down any resistance.

Rodriguez has said that the idea for the character of Machete arose when he met Danny Trejo twenty years ago, eventually flowering into the faux trailer that he did for Grindhouse and then the feature version, Machete, in 2010. From his appearance alone, the strong, stolid Trejo is a good, stoic lead in the Clint Eastwood / Sergio Leone tradition, which allows a constant stream of action to swirl around him. Instead of keeping him as the center of the story, however, this installment is hijacked by Demian Bichir as Mendez, who starts off as a Mexican villain before quickly morphing into a man suffering from multiple-personality disorder.

Even though Bichir keeps his performance in the minor keys, he's too strong a presence not to shove Trejo's Machete into the background, and since a good portion of the story follows their journey through Mexico toward the U.S. border, that undermines the film as a whole. To be fair, this may have been Rodriguez's intention; Machete Kills is the middle installment of a planned trilogy, and so, theoretically, Machete doesn't need to be the centerpiece, because things are being set in motion for the concluding installment.

Of course, my memories of Machete are already dim from a single viewing three years ago, so perhaps it's best to view Machete Kills as that most prized achievement of the 21st century: entertainment that is entirely disposable, designed to be enjoyed while muching popcorn and downing an adult beverage, and then promptly forgotten until the next episode arrives.

The film opens wide in theaters across North America on Friday, October 11.