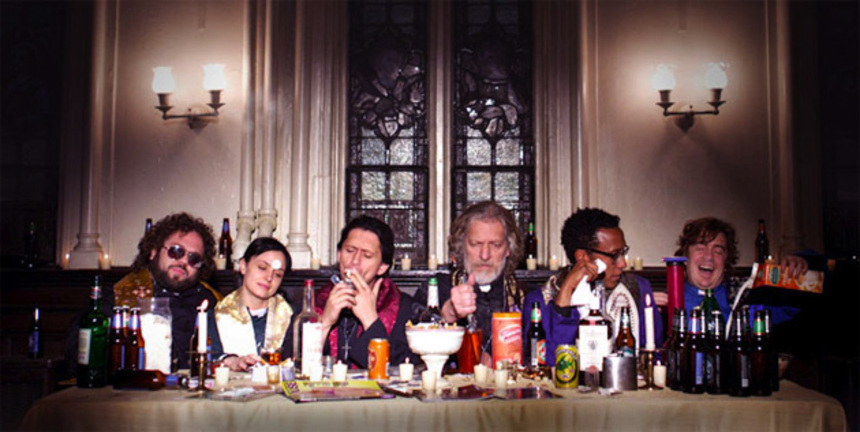 "I'm a woman, and you're a Catholic. Everything I do is a sin." -- A taste of the in-your-face comedy on display in J.T. Petty's Hellbenders.

Based upon the writer-director's own graphic novel, and pitched somewhere between The Evil Dead and Ghostbusters in tone, it follows a bunch of 'special-operations' Catholic priests who handle the exorcisms and hell-on-earth related anomalies that crop up in New York City from time to time. This motley squad, played by Clifton Collins Jr., Clancy "The Kurgan" Brown, Andre "Bubbles from The Wire" Royo, and Dan Fogler, are the 'nuclear option' for the the church when various dead-ites and demon-spawn walk the earth. If the demon cannot be conventionally exorcised, then the priest takes on the possession themselves, sacrifices their own life via suicide, and drags 'em straight to hell.

In order to be hellbound, these priests have to be sinning all the time; four of the seven deadly sins and six of the Ten Commandments violated in the past day or two is the mandatory minimum for a member to stay fit for duty. This provides the greatest strength of the movie: irreverent and blasphemous banter in the church-house during downtime.

The headquarters, which is a cross between a small church-house and a fire-hall, provides much of the film's location as the priests regularly smoke pot, drink booze, have casual sex and swear a whole helluvalot. Curiously, there is no murder, rape or pedophilia, but it makes up for the absence of the more gristly sins with damned hilarious word-play. It puts the film a fair bit into the territory of something amusing if inconsequential, like Mystery Men, such that the film is far more about the characters hanging out than getting caught in the plot or somehow justifying its high-stakes.

The church is, of course, embarrassed that rumours of the Hellbound Saints of Brooklyn pop up from time to time, which allows for documentary-style talking heads segments to help ease some of the expositional weight, albeit even with this device, there is still too much good joke-time wasted in explaining plot. When the recent pope dies, and a new one is appointed, the EPA's Walter Peck .... er ... a local diocese bureaucrat, Clint, shuts down their budget and closes up shop. This is rather poorly-timed, as a God-iilling Surtr, a demon from Hell, or at least the nearest convenient parallel dimension, has just busted his way into The Big Apple.

Everyone on the squad has their own personal demons on top of the literal ones, but the film devotes the greatest amount of of character development to prolific character actor Clifton Collins Jr., who looks pretty comfortable in a leading man role. Torn between his affair with co-worker Elizabeth (adultery, par for the job) and his shrewish wife hellbent on undermining his profession, Collins may be the only character in the film with any sort of arc. Another few passes at the screenplay might have fleshed out the rest of the team, but really, it allows for Clancy Brown and Dan Folger to get the lion's share of profanity and ad-libbed vulgarity to keep the low-budgeted 3D affair lively.

It is too bad, however, that the scope of the film is constrained to such a small number of locations. The story calls for some big set-pieces that the film cannot deliver, instead opting to split up the squad into twos and threes to handle single-room basement kind of encounters. The climax of the film on Staten Island is simply not big enough - and curiously removes a key character from the battle - to fulfill the potential of the simple idea.

This leaves me wishing that it was a Whedon-esque TV show rather than a feature film, because damn, the characters and their 'fitness' regiment would offer much grist for the episodic mill. Flaming vaginas, sex with bunnies and quips such as "Fuck : Satan" in the Character Actor portion of the credits crawl might prevent ABC or the big networks from broadcasting it, but surely this would be up somebody's alley on a specialty cable channel or fill up those after-hours time slots on the Christian Broadcasting Network.

Do you feel this content is inappropriate or infringes upon your rights? Click here to report it, or see our DMCA policy.
Clancy BrownClifton Collinshorror moviesJT Petty