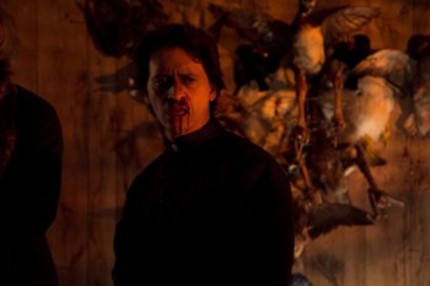 S&MAN and The Burrowers director JT Petty began shooting his secretive new exorcism flick Hellbenders yesterday and - in something of a surprise for a film that hasn't even released a synopsis or tag line yet - the first images from the first day of shooting arrived over at Geek Tyrant today.

The man with the bloody nose there? That's Clifton Collins, who stars with Clancy Brown and Dan Fogler in the story of an elite, hidden group of exorcists plying their trade in Brooklyn.

Beyond that very little is known other than that Petty is shooting the film in 3D using the new generation of Epic cameras from RED. The remaining images are dominantly behind the scenes shots but they do give a very good look at the environment and feel of the makeup effects. Very nice.
Sign-In to Vote
Tweet 0 Submit