Review: ENDER'S GAME Is Not Worth Playing

I had some time during the generally tedious Ender's Game to let my mind drift, hearkening back to a time when I would have been genuinely excited to see this kind of film on screen.
I'd have been a young teen, wanting to see myself as Ender, the kid that gets things that the adults simply cannot. He's the smart kid with balls of steel, taking the aggression of his brother and the empathy of his sister and cutting a heroic young figure that can literally be the saviour of his people.

So, while all this stuff is being set up with dreary dialogue and murky visuals, I also spent time thinking of The Last Starfighter. I remembered how even as a kid I found that story preposterous, but I still managed to revel in the groundbreaking CGI effects. Decades later, we've got a film that actually has to dumb down some of its effects to demonstrate "game level", a film that uses "photorealistic" as a major plot point in order to obfuscate certain motivations by some morally suspect adults.

We are literally a generation away from the The Last Starfighter, a film that presented the sci-fi conceit that video games could be used as training devices for children to go to war, decades before Call Of Duty became a favourite pastime for real G.I.s, but also a generation away from the ubiquity of drone warfare, the near complete divorcing between the virtual and the actual in many current military engagements.
In Ender's Game's heavy-handed metaphor, the virtual is demonstrated several times to have real world consequences, where our dreams are shaped by reality, and our entertainment may well end up resulting in consequences of apocalyptic proportions. This may be the key difference between my nostalgic appreciation of the jingoistic Reagan-era frivolity, versus my easy dismissal of this film's more polemical, and perhaps more insidious, tween literature that's all the rage.

On the other hand, it just might be that I'm no longer that kid, no longer the right audience for this film.

I also had time to think of another bugs-from-space movie with elements of bravado, the glorious Starship Troopers. Ender's Game is a film that's only accidentally darkly comic and post-modernistically sophisticated. Paul Verhoeven's flick takes the horrors of the Second World War and shows it to be both dehumanizing and quite fashion-forward in its choice of fascist leather gear. The titular Ender's game is to float about in some sort of zero-G laser tag, the three-dimensional playing field populated by gaggles of two dimensional, forgettable characters. 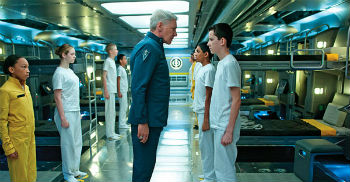 Save for our dear Ender, the rest of the compatriots are pretty forgettable. Asa "the kid from Hugo" Butterfield does a decent enough job with the title character, as he's got more to work with than most.
Harrison Ford has been relegated to supporting actor for some time now, and yet even floating around in space he seems strangely out of his element. Hailee Steinfeld, so stunning when working with the Coens on True Grit, has little to do here other than provide some emotional or physical support. (Plus, she seems really good at counting down, something she has to do numerous times throughout the film.) Because I skipped the trailer, a certain Knighted actor showed up as a pleasant surprise to me, even if the Kiwi accent sounded strange coming from his lips.
I saw the film with many fans of the book, and they seemed even more disappointed than I. For me, a complete lack of expectation is usually best for films like this, as I enjoy being pleasantly surprised if it works out well. I heard chatter when leaving the theatre about how the book was so much better, that the studio must have shaped the script by Gavin Hood, who also directed, into something more fitting for a general audience. Maybe that's the case, but being resolutely free from comparisons to the source, I didn't find any particular moment more egregious than the next; it all very much felt part of a whole. A tedious, silly hole, but a consistent one at that.

Somebody may have something interesting to say about the film, about how the virtual worlds are made to look "computery", yet the CGI that litters much of the film is just trading one form of artifice for another that's meant to subvert uncanny valley territory. I understand after the fact that the book took a much simpler take on the "game", one that in translation to the language of cinema makes for something both more epic yet narratively awkward. This is simply further proof that what might work for a gazillion fans of the book simply doesn't translate on the visual canvas of cinema in anything approaching a convincing way.

Maybe some adolescent will see themselves in this film, using it as a gateway to other works with greater impact. Maybe another viewer will see it as simply entertaining, an easy-to-follow sci-fi blip with a hint of darkness to keep it interesting. Still, there's a sense that it could have been so very much better that makes the experience more frustrating than anything else.

For me, Ender's Game doesn't seem like it's worth playing. It's got some kernel of an interesting idea, trounced by a script that plays so safe it loses much of its impact, and its preposterous conceit devolves into near farce by the time it reaches its tedious, entirely predictable conclusion.