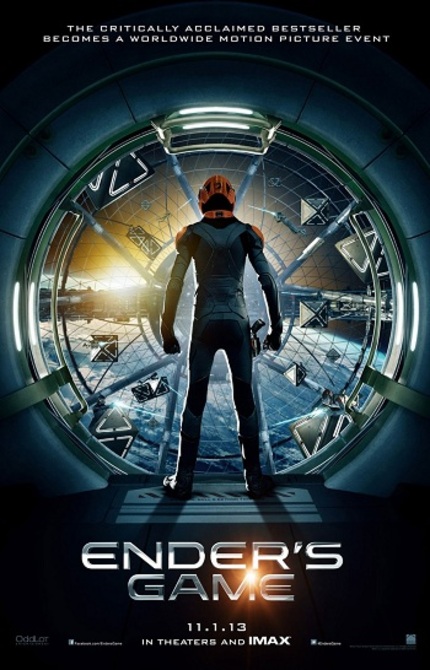 The first footage has arrived online for Gavin Hood's upcoming science-fiction thriller, Ender's Game. Based on the popular novel by Orson Scott Card, it tells the story of a gifted young lad who is recruited into a hi-tech military academy in deep space to prepare for an upcoming alien war. Asa Butterfield, who many will recognise as the star of Martin Scorsese's Hugo, stars, alongside such notable veterans as Harrison Ford and Sir Ben Kingsley.
Now, I've not read the book, so I'm not coming to this project with any misty-eyed nostalgia for this universe or these characters. Butterfield did good work in Hugo, but is now hitting puberty, which has proved an insurmountable stumbling block for a number of child actors in the past. Kingsley is definitely in favour right now thanks to his fantastic work in Iron Man 3, but his previous outings in child-friendly sci-fi (Thunderbirds, anyone?) have left much to be desired.
South African director Gavin Hood started out well with his Oscar-winning Tsotsi, but Rendition was dull and may never be forgiven for his involvement in X-Men Origins: Wolverine. And then we come to Harrison Ford. Sure, he was Han Solo once (and may be again if you follow all the Star Wars VII talk, which I am already tired of), but most recently he did little more than stumble his way through Jon Favreau's sci-fi misstep, Cowboys and Aliens.
While normally I'm not interested in these teasers for trailers of movies, this one amused me because of the painfully stilted intro from Butterfield and Ford. Both deliver their lines as if they're being possessed by an alien marketing executive, but it's the way Butterfield goes to elbow prod Ford, as if this is the 15th take they've done and Ford keeps missing his cue, that tickled me.
Anyway, the Ender's Game trailer proper lands on Tuesday and the film opens on 1 November. Zero gravity battle rooms, teen angst, space, and facial tattoos like someone's been reading The Stars My Destination. Behold.
Sign-In to Vote
Tweet 0 Submit

Do you feel this content is inappropriate or infringes upon your rights? Click here to report it, or see our DMCA policy.
Gavin HoodOrson Scott CardAsa ButterfieldHarrison FordHailee SteinfeldAbigail BreslinActionSci-Fi

I never thought there would be a teaser shorter then Ridddicks 22 seconds teaser, but here we get a 15 second teaser. What will be next, 10 seconds?

It is a fantastic book and well worth the read. This looks every bit as fantastic as all the talent involved has suggested. Ford seems in good form too.

Am I the only one that liked Rendition? It's not a perfect movie (The pacing is the major problem) but I still liked it.

Whenever I see mention of this movie or any of the books by Mr. Card I feel compelled to mention for those who don't know and may care, that Mr. Card is a RAGING HOMOPHOBE! Whom often gives money to anti equal rights organizations and he has personally campaigned against equal rights to the government. Like I say, I mention it for those who care.
I read Ender's Game in high school and thought it was decent. Though I personally have no intention giving an unabashed bigot one cent for his products whether they have anything directly to do with his bigotry or not. Either way thats money going to fight equal rights for all citizens.