Opening: PARKLAND, A Refreshingly Original Take On The Death Of JFK 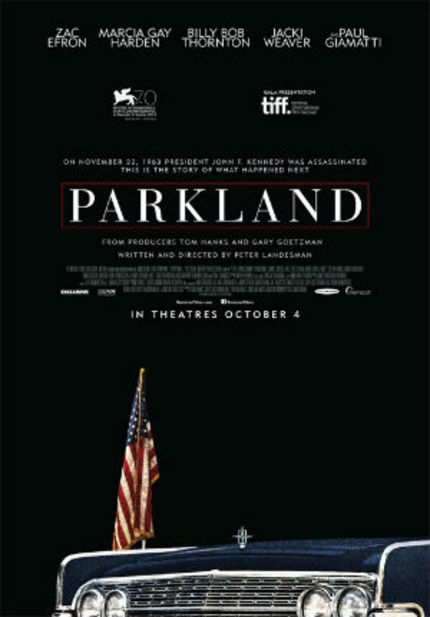 As a resident of Dallas, Texas, for more than seven years, the assassination of U.S. President John F. Kennedy has taken on deeper meaning than it did before I moved here.

Dealey Plaza, where the president was shot on November 22, 1963, is now a familiar sight from multiple personal visits, The Texas Theatre, where Lee Harvey Oswald was arrested, has become a favorite stomping ground in its current incarnation as a well-programmed repertory house and special events location.

Thus, my considerable interest in Parkland, a film about the events of that day. It screened at the Toronto International Film Festival last month, and our own Jason Gorber filed a review:

The film is episodic in its construction, following the many lives that were shaped due to the events in Dallas. Parkland Memorial is the hospital where the President was taken after having much of his cranium obliterated, and we see the way that those in charge of traumatic medical situations dealt with things as they occurred. We also meet the FBI agents that had been tracking Oswald prior to the assassination, the man who shot the famous 8mm film of the events, and perhaps most interestingly we follow the events that occupied the brother of the alleged assassin.

With a cast that includes a veritable constellation of talent, from Zac Effron and Paul Giamatti to Marcia Gay Harden, Ron Livingston, Bill Bob Thornton and Jackie Earle Haley, we're exposed to these various timelines in crosscut fashion. All do the work justice, and save for some brief moments do so with credible restraint.

This is a film that illuminates the little details of the day - a bloodied pair of gloves, the challenge of developing film, the sawing of a plane door - creating memorable vignettes. In so doing, Parkland provides a refreshingly original take on such an historic event. It may not entirely succeed, but it's a noble effort at a new way of dealing with an event of such historical magnitude.

The film opens in theaters across North America on Friday, October 4. Visit the official site for more information.