Jason Gorber
Contributor; Toronto, Canada (@filmfest_ca)
Sign-In to Vote
Tweet 0 Submit
Decades in the making, the Toronto Film Festival's Lightbox is feting its favourite son with an impressive collection of artifacts from the last 40+ years of David Cronenberg's remarkable career.

As the official press release describe the exhibition:

Launching November 1 in the HSBC Gallery at TIFF Bell Lightbox, TIFF's first major original exhibition, David Cronenberg: Evolution, parallels David Cronenberg's evolution as a filmmaker with his longstanding fascination with the possibilities and perils of human evolution itself. Curated by TIFF Director & CEO Piers Handling and Artistic Director Noah Cowan, and divided into three major sections that provide a loosely chronological overview of Cronenberg's career, the exhibition traces the development of the director's evolutionary themes across his filmography through more than sixty original artifacts, visionary designs, and rare and unseen footage.

Collected in this gallery are a few of the key elements that jumped out as I toured the space. For any fan of this remarkable artist, it's a treasure trove of elements dating back to his student work, right through to Cosmopolis. For those that can't make the trip, let this be a small taste, for those in proximity to Toronto, consider this an absolute must-see event. 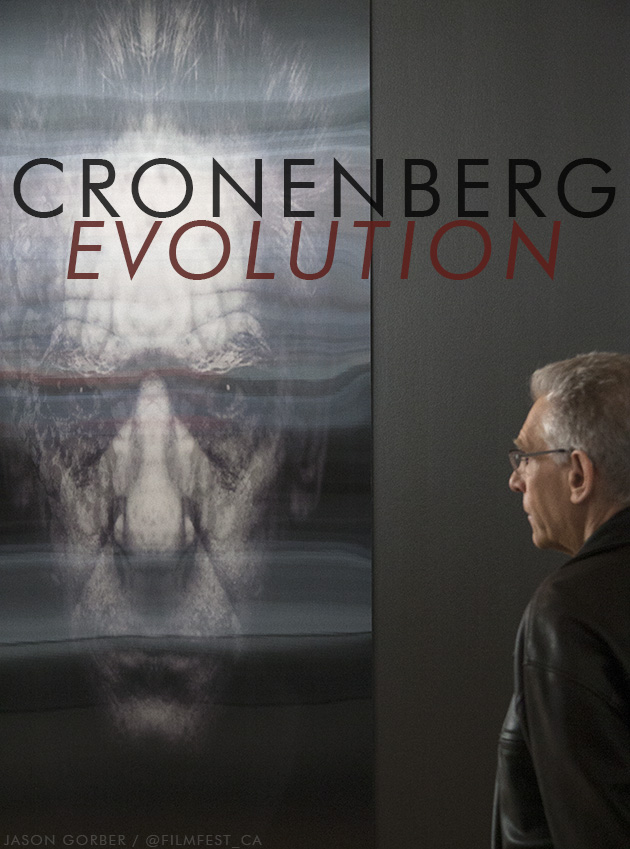 Waiting to attend to a gaggle of press, I grabbed this shot of DC standing in front of a lenticular poster that shifts between his visage and that of a Naked Lunch Mugwump. 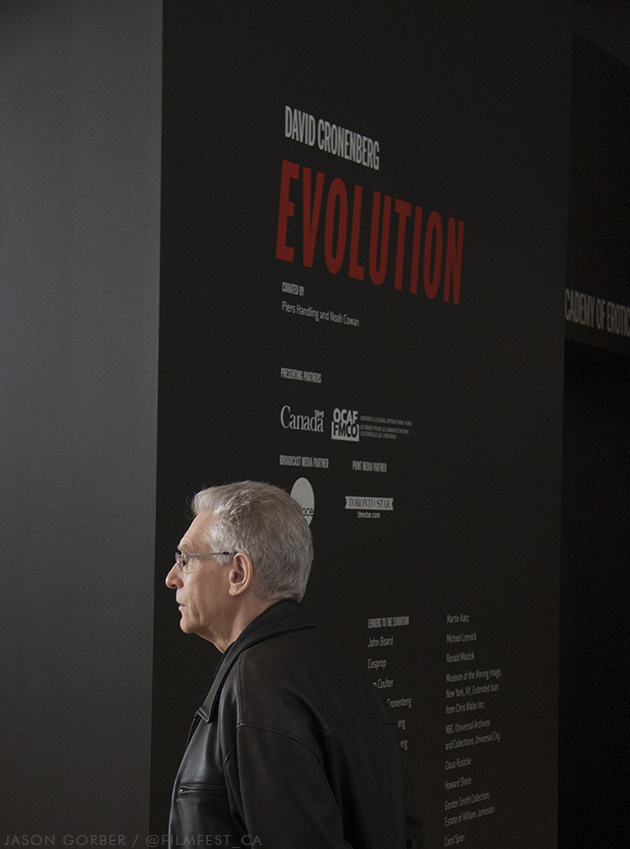 Another shot of Cronenberg, backed by the poster for the event itself. 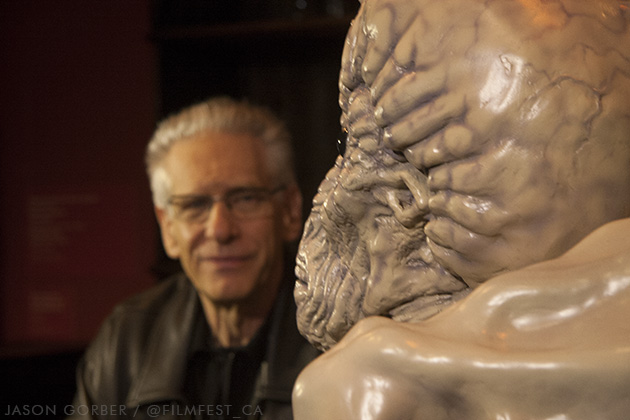 Cronenberg sharing a drink with a friend... 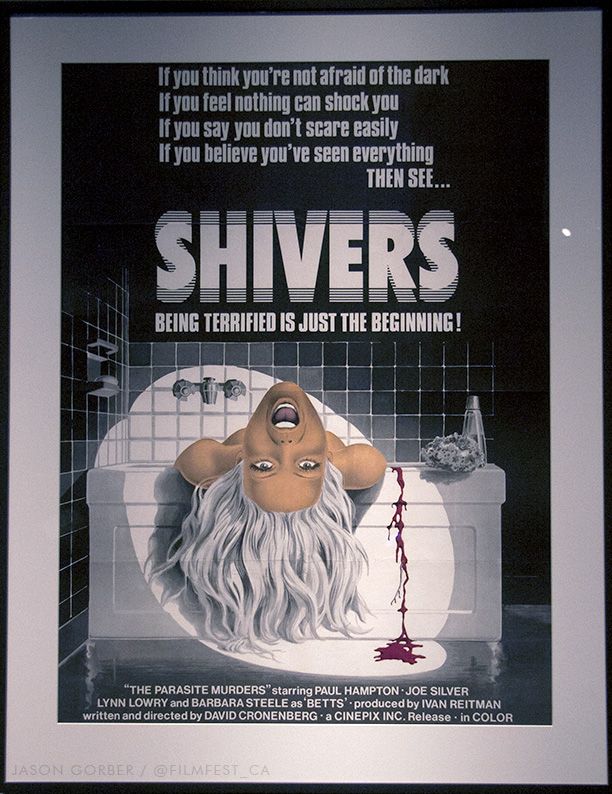 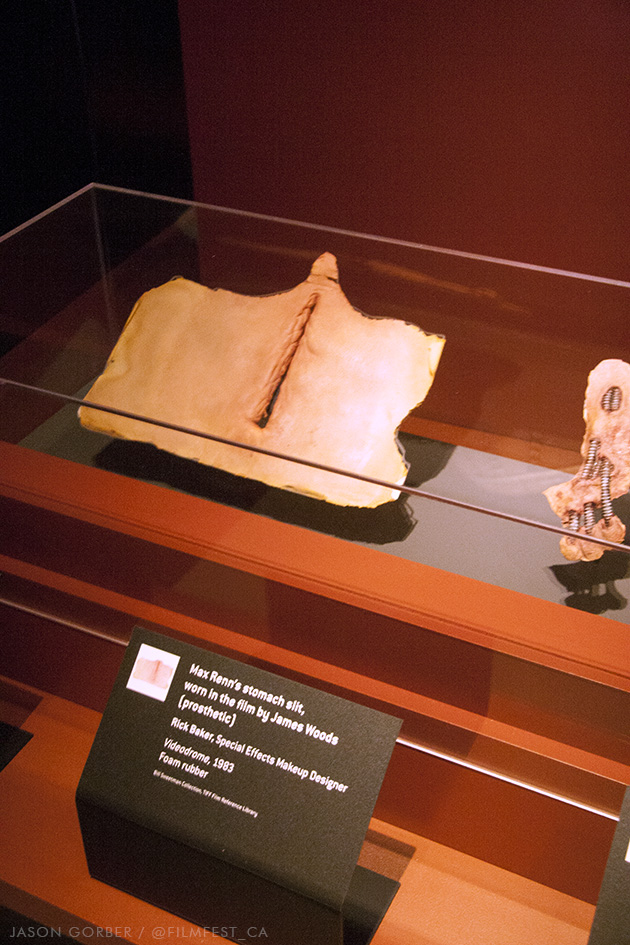 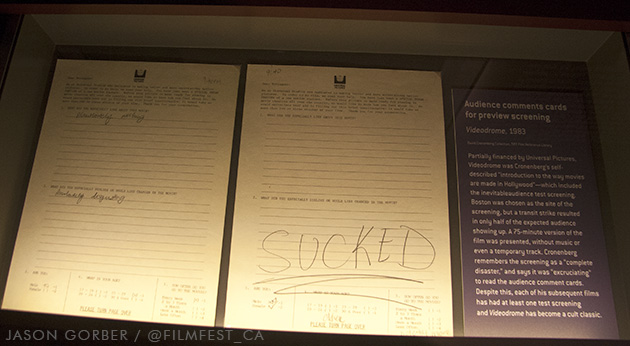 In the exhibit are a series of drawers, and within you can find all kinds of wonderful estoterica. Here's one of my favourites, an audience comment card from Videodrome with a most effusive criticism. 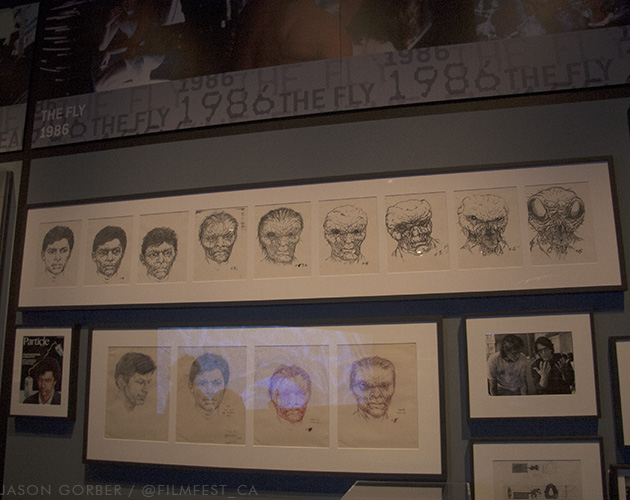 A series of drawings showing the Brundlefly transformation process, along with many other pieces of artwork from the film. 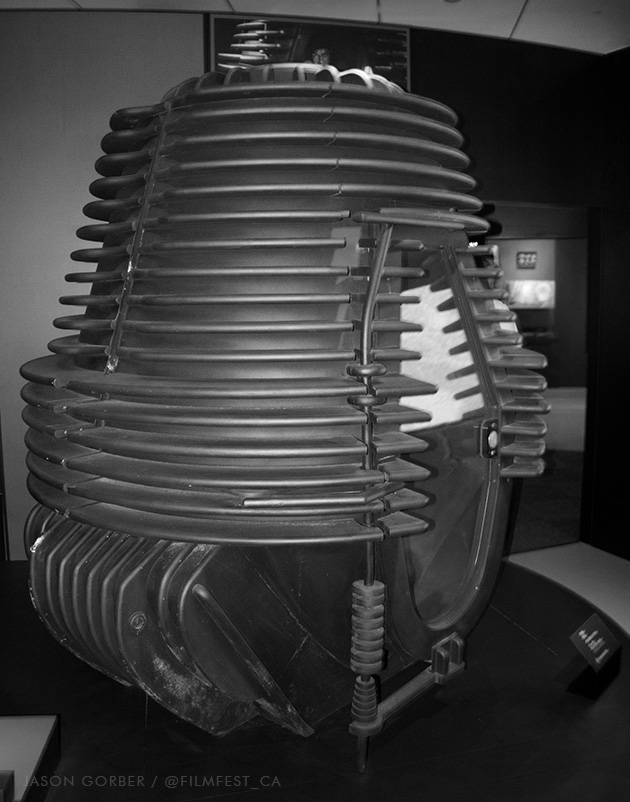 The Fly's pod, about as iconic an image for Cronenberg's ouevre as you can get. Just out of frame is the Ducatti engine he used as the basis for the design. 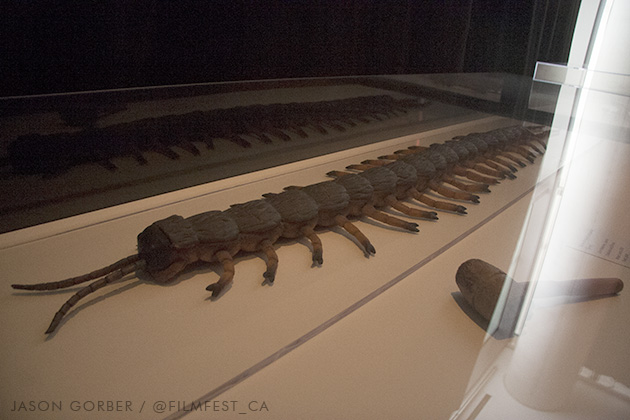 This beastie runs about 6ft in length.... 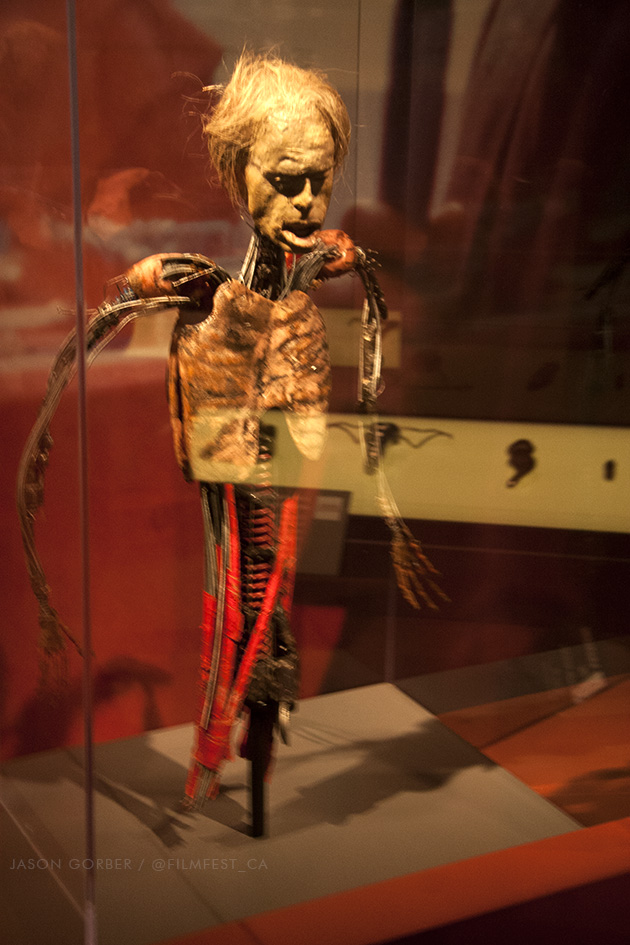 One of the mechanical twins from Dead Ringers 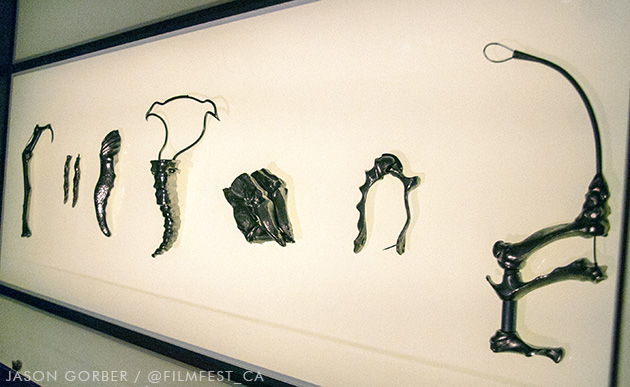 Cabinet containing the medical instruments from Dead Ringers, some of which were never used in the film. 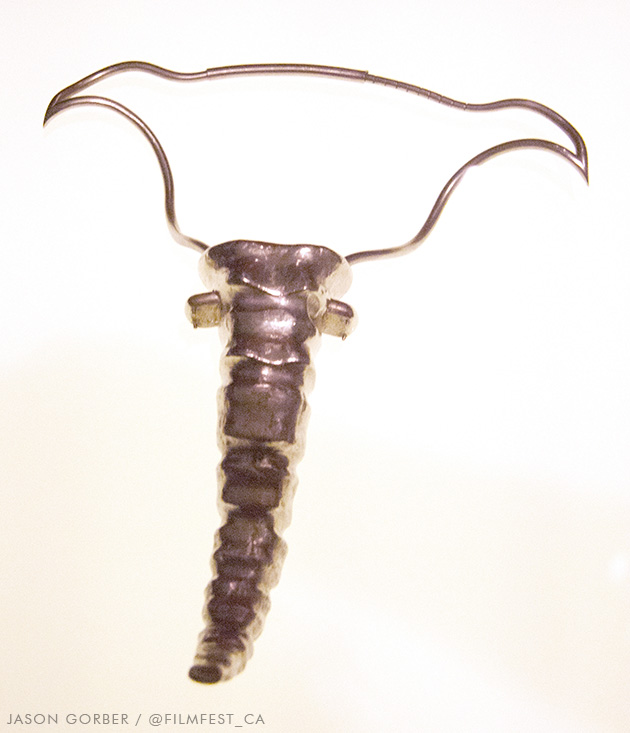 Detail of one of the Dead Ringers Gynecological instruments. 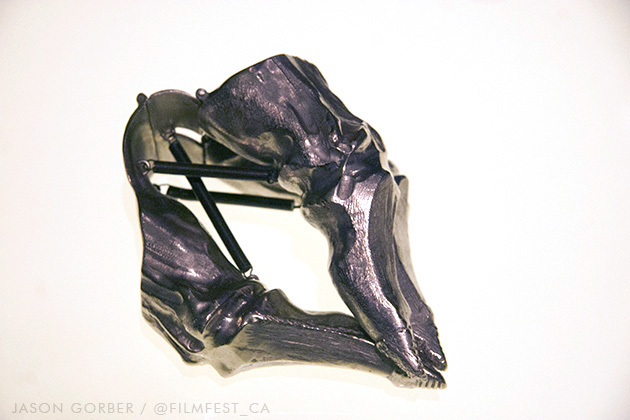 Another detail of the Dead Ringers Gynecological dodads. 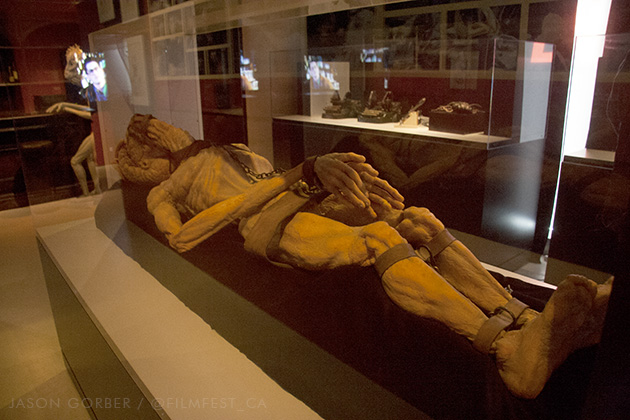 A supine Mugwump, an actual prop from the film. The foam latex creatures disintegrate over time, this one was carefully restored, in part thanks to funding from Canadian Cultural institutions. So, yes, our Federal Goverment helped rescue a Mugwump for generations to come. 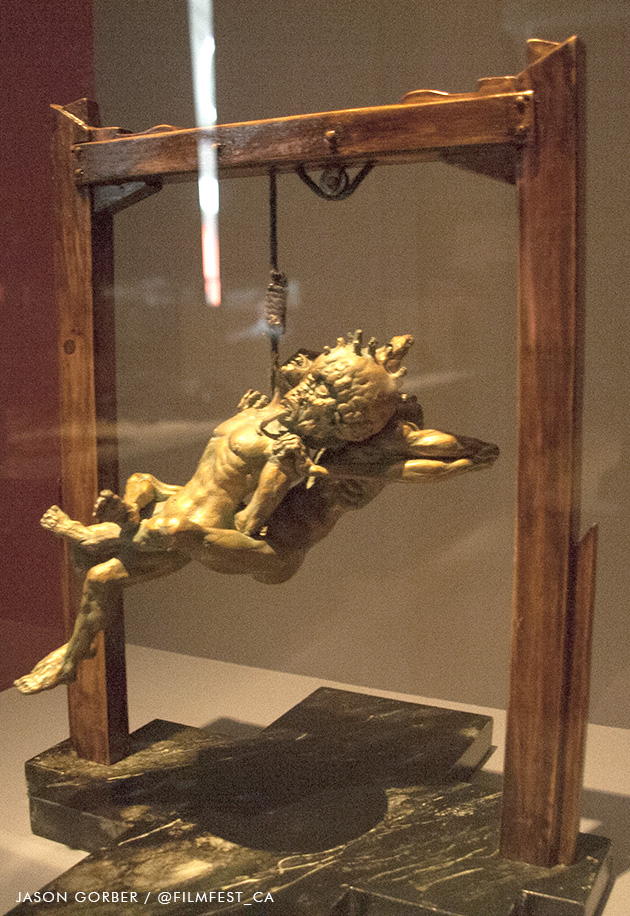 One of the many maquettes that show up throughout the exhibition. 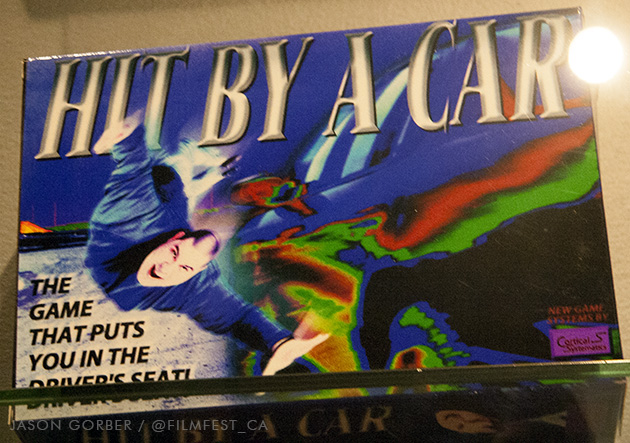 One of many props, this one from the vastly underrated Existenz, with a title that conveniently harkens back to the even more underrated Crash 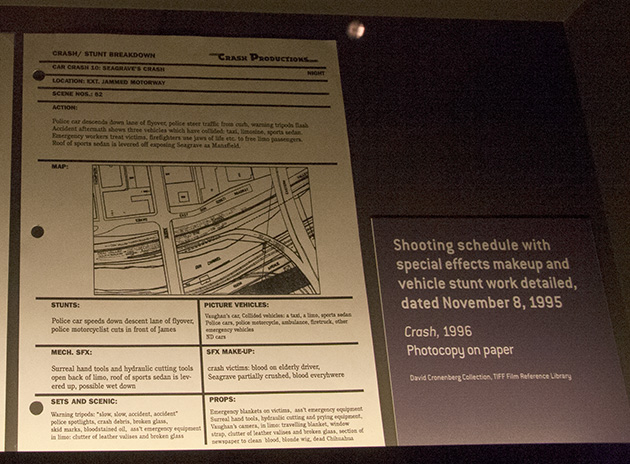 Details of the stunt work for Crash, detailing the Toronto streets used for shooting the many car incidents in the film. 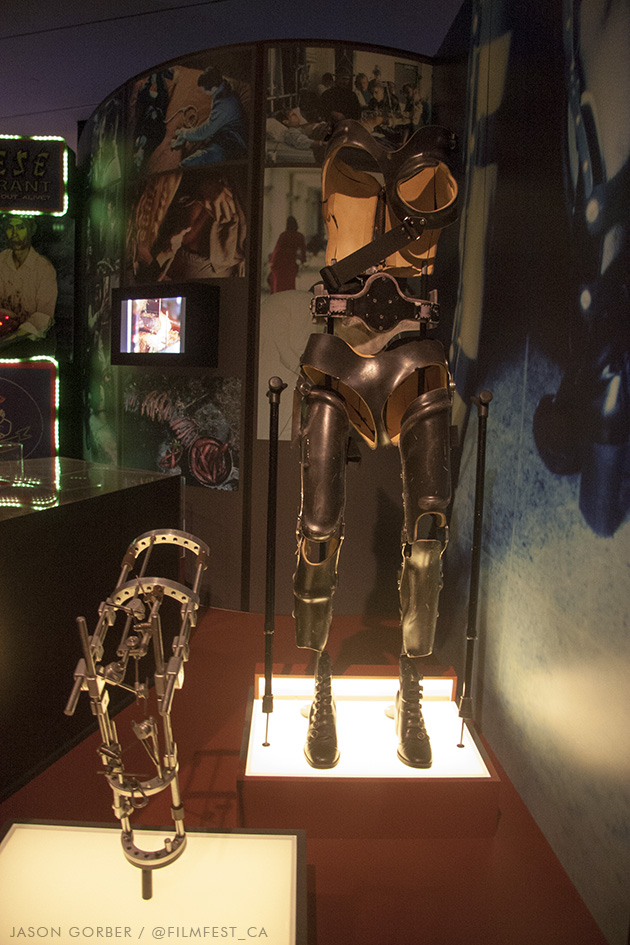 Some of the prostetic and pratical effects tools used in Existenz and Crash. 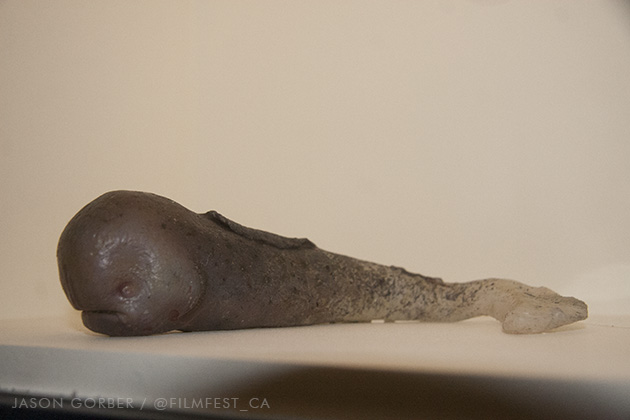 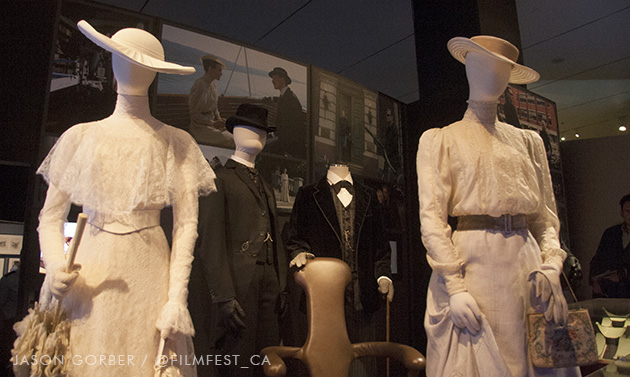 Costumes from his period dramas such as A Dangerous Method

Oh, and on the 4th Floor, you can get a custom pod made... (dammit, they followed me here!)