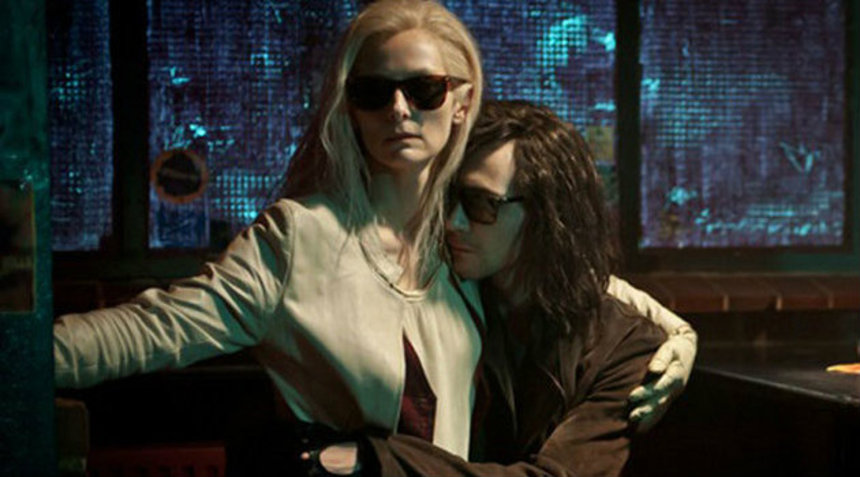 Detroit is the new Transylvania in Jim Jarmusch's delightfully detached vampire reverie, Only Lovers Left Alive. The film manages to significantly build upon and outdo Neil Jordan's recent Byzantium in terms of clawing back the genre from its more recent sparkly teen-focus.
The mature tone is pregnant with the kind of disaffected slow gaze that would probably result from a century or three on this imperfect earth with its revolving social cycles.  It achieves a modern-Gothic romanticism better than pop culture's own aging vampire-queen Anne Rice ever managed in novel form or when adapted to celluloid. It evokes the people exodus and urban decay of Motor City in such a transcendent fashion that it nearly renders Heidi Ewing and Rachel Grady's Detropia redundant. Undoubtedly, this is the white-haired director firing on all cylinders even as he is not in much of a hurry drive any sort of plot.  The patience in pacing echo the lifestyles of the quasi-immortals caught up in music, art and ennui.
At first glance, some might label the movie slight due to its complete lack of concern for plotting, but any film which allows the viewer to breathe in so deeply, to revel in its dark spaces and eclectic moods is anything but.  Only Lovers Left Alive is akin to listening to an exceptionally good album from end to end.  The film even visually suggest this in the opening shot of the camera spinning and fading into vinyl spinning on its turntable.  Jarmusch's own band, Sqürl provides a droning, but warm and fuzzy, score that is wonderful thing in which to get lost in itself.

Tom Hiddleston plays an old (but as ancient as the cameo-ing John Hurt) vampire named Adam, whose current existence in early 21st century Detroit is as a reclusive musician with an ever growing collection of vintage musical instruments and a penchant for writing dense rock 'n roll songs. The type of songs those of taste and sophistication might use as ambiance for suicide. Adam might be on the verge of suicide himself as his connections to the outside world are few. Outside of peaking outside his crumbling mansion of lurkers, he dresses up as a doctor to contraband premium blood out of a local hospital (with the help of a droll Jeffrey Wright.) His other supplier, an unrecognizably shaggy Anton Yelchin is a purveyor of exotic guitars who occasionally drops in to inquire, "Anything else weird or interesting you might require?"  Retro recording equipment hasn't looked this claustrophobically sexy since Berberian Sound Studio.
When Adam's requests turn towards wooden bullets, he Skypes an intervention-plea to his ex-lover in Tangier.  For Jarmusch's last couple pictures, Broken Flowers and in particular The Limits of Control, his camera has been in love with the way Tilda Swinton walks, sways or sashays.  Her travel from North Africa to America (night flights and taxis, natch) are a sensual visual experience in and of itself.  When I say I could watch a film of Swinton merely packing her luggage, I actually get that here, in miniature, and it is indeed wonderful to see her throw her copies of Fyodor Dostoyevsky and David Foster Wallace into her carry-on valise.  Existing both as a kind of mother and lover to Adam, Swinton's Eve is more engaged in living in the world ("I'm a survivor") and as such she is obliged to risk international travel to revitalize her former lover even if there is the risk of any one her flights delayed on the tarmac sunrise.  Blood doesn't go through customs, thus, vampire travel is serious business.
Despite being 20 years Swinton's junior, Hiddleston matches her otherworldliness and the actors feel very right as a couple.  Sure, age differences matter little in this genre, but actor chemistry certainly does.  And these two have a smouldering comfort with one another.  They eat blood popsicles together, night-tour the former Michigan Theatre, with its imposing architecture now a parking lot inhabited by wolves.  They talk art, science, and music and speculate on a revitalized Detroit some point in the distant future.  Partaking of schnapps glasses of Adam's procured type O negative together is shot like the heroin injections of Danny Boyle's Trainspotting.  You can almost hear the Lou Reed.
Storming in from California, Mia Wasikowska's younger impulsive vampire provides as much prosaic conflict as the film is willing to allow calling herself Eve's sister and imposing herself on the couples reverie.  Eve wryly offers, "we're not related by blood."   Her presence injects a bit of dysfunctional family drama of sorts, but Jarmusch spins this as 'youthful energy' into a necessary frustration; the drama that reconnects us - if us were world-weary vampires - back to the world, back to excitement.  Apparently even vampires need to be goosed by their 'children' once in a while.
Adam soothes Eve by verbalizing Albert Einstein's theory of 'Spooky Entanglement.' That particles can influence each other's state, even as they are a universe apart.  I get a similar sort of reaction, transmission from screen to soul, every time I watch Jarmush at play with his off-kilter genre-remixes.  Proof enough that cinema, or good old Detroit, ain't dead, folks.