Fantastic Fest 2013 Review: WOLF Roars Out Of The Gate With Criminal Self-Assurance 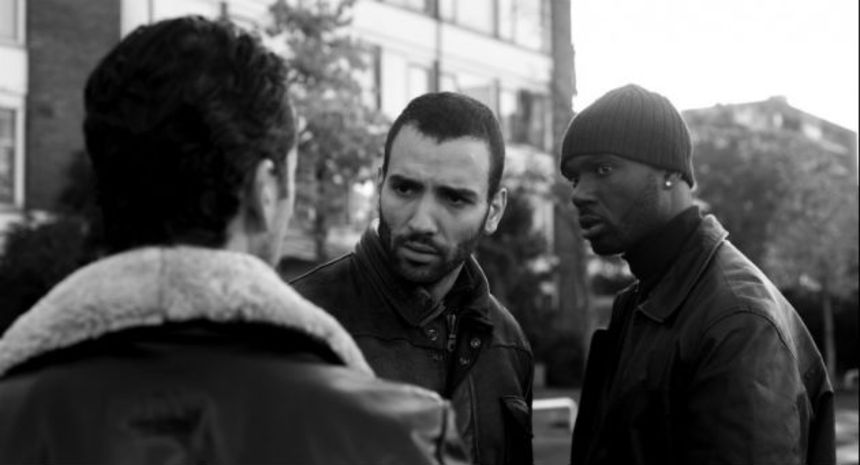 Boom! Without giving away the timing or context, at a certain point Wolf explodes into shards of glass that then recombine to reveal a wider, wilder landscape.

Up to that moment, Jim Taihuttu's film was speeding on a straight narrative highway, with a few sweeping curves to guard against the possibility of conventionality. What appears to be a youthful nighttime lark -- the brazen theft of motor scooters -- quickly resolves into a portrait of a Moroccan immigrant who has rebelled against the hard-working lifestyle of his devoutly religious parents. Majid (an intense and glowering Chico Kenzari) is making his own way in Dutch society, but his hard-headed personality landed him in prison.

Recently paroled, he seems to have learned nothing from the experience. He is smarter, it seems likely, about how to "fake it" as someone who wants to re-integrate into normal life. He is circumspect about keeping his criminal lifestyle better hidden from his parents, with whom he lives, along with his young brother Tarik. He shows up for work, albeit late, at a flower auction warehouse, and reports obediently to his parole officer.

Recommended to Ben (Raymond Thiry), an experienced fight trainer and manager for kick-boxers, Majid's old personality promptly manifests itself. He hates waiting, is exremely confident about his own physical abilities, and cannot restrain himself from beating the shit out of a lesser sparring opponent.

His pugnacious character asserts itself in other areas of his life, as well; he wants to reclaim his old girlfriend Tessa (Bo Maerten), despite reports that she has been unfaithful to him repeatedly. And we know it's only a matter of time before his violent disposition gets him in trouble with his friends and/or criminal cohorts. Yet he demonstrates great tenderness and kindness toward his brothers, the young Tarik and older brother Hamza (Nasrdin Derwig), who lies dying of a terminal condition in a hospital bed. And he's also tolerant of his running buddy Adil (Chemseddine Amar), who busts Majid's balls constantly, and seems to be a friend who is terribly aware, and resentful, of his own limitations in comparison to Majid, who is brimming with self-confidence, not bravado.

The warring tendencies within his own personality drive Majid in the ring as a rising kick-boxer and in the criminal underworld, where he becomes a rising bad-ass. As a film, Wolf is driven by writer/director Jim Taihuttu, who has an intuitive instinct for matching his strong written material with his galloping visual style. He keeps shifting gears, switching to (obviously) handheld only for scenes that call for that style, for example, which helps the story to flow organically out of the sound and vision that serves as accompaniment.

Even when the narrative dips into lukewarm water, the film remains energized due to the accomplished cast, led by Chico Kenzari as a very strong man whose biggest weakness is that he refuses to acknowledge that he has any. Raymond Thiry, who was the stirring lead in last year's Black Out, contributes a powerful turn as the grizzled, pragmatic, and intolerant Ben.

In Wolf, all pistons are firing, so all the audience needs to do is strap in for the ride.

The film screened at Fantastic Fest as a North American premiere.

Do you feel this content is inappropriate or infringes upon your rights? Click here to report it, or see our DMCA policy.
Chico KenzariDutchFantastic FestFantastic Fest 2013FF 2013Jim TaihuttuNetherlands