Destroy All Monsters: Can You Like The Film If The Filmmaker's A Dick? 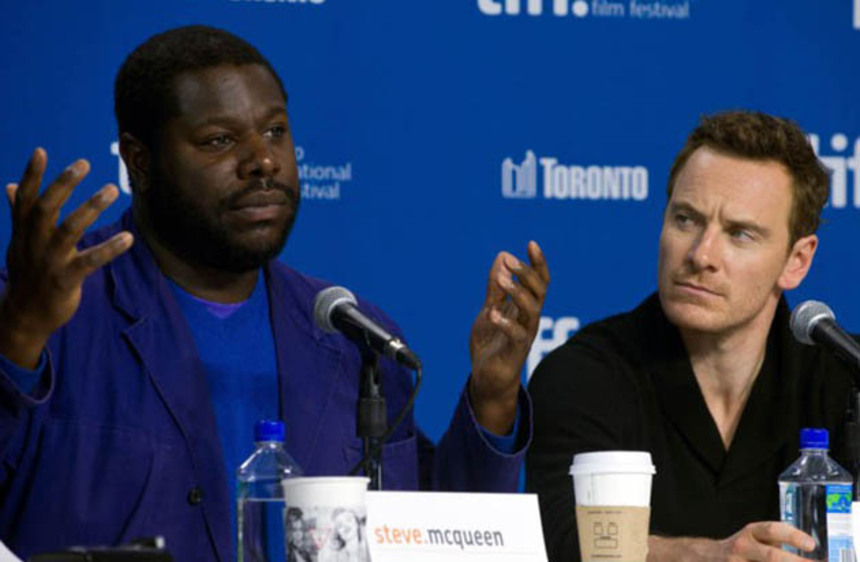 Steve McQueen's a dick. At least, he seems to be. I don't know the man personally and I've never spent any time with him one-on-one, but here at the Toronto International Film Festival, in Q&As and at press conferences, he behaves like a dick.

To be fair, a lot of McQueen's behaviour is in response to processes that I wouldn't wish upon my worst enemy. People who ask questions at film festival Q&As do not, in my experience, have the widest frame of reference in terms of how films are made, and tend not to be interested in the kinds of things filmmakers are interested in, either. Add to that the questioners who are only interested in satisfying their own egos - the "this is more of a comment than a question" guys, or the people who stand up and cite fifteen examples of previous work before deigning to ask a question - plus the journalists at press conferences who must delve into the celebrity side of moviemaking to make copy, and the frustrations of McQueen and others like him become fairly relatable.

McQueen is at TIFF this year to promote 12 Years a Slave, which is getting solid reviews (read Ryland's take here) and early Oscar buzz for Chiwetel Ejiofor, who could legitimately earn an Oscar for anything he appears in, up to and including 2012 (though for reasons not strictly related to performance in that case). 12 Years a Slave is aimed at a wider audience than McQueen's two prior efforts, Hunger and Shame, which were so specific in niche and unrelenting in focus that they could easily be forgiven for turning away the vast majority of the filmgoing public, regardless of whether McQueen pitched woo to audiences at festivals or not.

Saying that McQueen is "promoting" Slave, though, implies that the filmmaker wants you to see the film, and McQueen apparently doesn't give a shit one way or the other. He staunchly refuses to play the game of making people like him or his movie, and frequently acts like he's genuinely baffled as to why anyone is asking him any of these questions at all.

There's nothing wrong with not giving a shit, of course, and one area where McQueen succeeds beyond question is in forwarding a serious consideration of the issues contained within his work. But in terms of the business side of the movie business, at some point someone will have to figure out if McQueen's doing more harm than good by turning up at festivals and berating audience members and journalists for having opinions he doesn't consider sufficiently evolved to interrogate his movies. His Q&A appearance at TIFF for Shame two years ago was a shit-show still remembered by all in attendance; his turfing of questions at the Slave press conference this week has already spawned some Tumblr gifs, the current high water mark of pop cultural relevance.

Leaving aside the question of whether or not McQueen is a dick - because, again, I have no idea how he behaves IRL, and it's not relevant to this question anyway - I'm wondering how much the public personae of the creatives in the film industry influences the way we engage with their movies. Another TIFF 2013 filmmaker, Eli Roth, makes movies that I generally have little patience for, but I like Roth so much as a personality (reiterating once again that all of these public personalities could be, and likely are, highly distorted or outright manufactured versions of the private individuals) that I bought a ticket for The Green Inferno without question. (Glad I did, too - if it's not quite the Citizen Kane of white-Americans-run-afoul-of-South-American-cannibal-tribe movies, it's in the top three.)

When a filmmaker dicks out as spectacularly as, say, Mel Gibson, we tend to pause when next confronted by their work, or even work that they are involved in (see the revulsion upon the release of The Beaver, for example). Michael Bay tends to get mentioned as a spectacular dick, too, but that hasn't slowed down the grosses on the Transformers films at all. Does a filmmaker's personality matter, beyond what can be intuited in the work itself?

For the majority of the moviegoing public, the answer is probably "no," because they'd have no awareness of those personalities and go to movies to see what's in them, not who's behind them. For films in close-quarters indie niches where the director becomes a brand to a much smaller target market, though, I'm left to wonder.

This question initially emerged for me with regards to Peter Jackson, who has so brilliantly constructed his public image as a nice fella, one of us, that it inevitably occurred to me that the whole thing could be invented. I genuinely hope it isn't, but the fact that I hope that demonstrates how completely Jackson has forwarded a public reading of his celebrity that is folksy, charming, and decidedly geek-friendly - which would, of course, be the optimal brand for him to leverage in selling his work, if you want to apply a "there are no coincidences!" paranoia to the thing.

And in spite of my extremely high regard for both Hunger and Shame, I find my interest in Steve McQueen as a filmmaker cooling rapidly as he wanders around refusing to suffer fools lightly. Not everyone can be a people person, but do the not-people-persons have to stand in front of their films and tarnish the brand? Or should they leave the stupid questions to those more readily willing to understand that this art form is a business, and businesses who sneer at their customers don't generally thrive?