See More Evil With The Soska Sisters: SEE NO EVIL Getting A Sequel 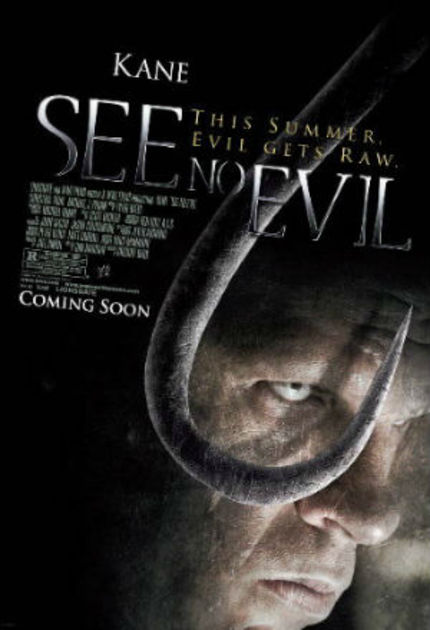 In all the annals of sequel-dom, is there is a more unlikely candidate for a sequel than a horror movie starring a wrestler-turned actor? A movie that grossed the grand total of $19 million worldwide, a pittance in the modern era?

Released in 2006, See No Evil featured the WWE wrestler known as Kane as a psychopath named Jacob Goodnight, pitted against a group of delinquent teens in a broken-down hotel. Our friend, noted horror expert Scott Weinberg, reviewed the film for another site at the time of release. He described it as ...:


... a shamelessly derivative and helplessly inept piece of genre flotsam that rips off everything from Friday the 13th to Saw 2 -- and does so in only the most tiresome and unremarkable fashion imaginable. This flick sounds like it was written by a mommy-hating nine-year-old who just discovered the joys of pointless profanity, looks like it was shot inside of an abandoned Motel 6, and feels precisely like the cynical, careless, and flimsy piece of plagiarism it so obviously is. While some horror flicks use their gritty, grungy exteriors to set a mood and create some tension, See No Evil is more than content to wander around its unconvincing soundstage, doling out nothing but atrocious acting and/or writing, desperately hoping that a small contingent of slasher supporters and wrestling aficionados will care enough to see what the thing has to offer. (Which ain't much.)

The film was the first production from WWE Studios, which may explain why they have a soft spot for it and are making a sequel, according to Variety, in partnership with Lionsgate.

The (potentially) good news is that Jen and Sylvia Soska have been hired to direct it; they made last year's well-received indie horror American Mary and have a devoted fan base behind them. Production will start in the fall, with Kane returning as Jacob Goodnight. He "rises from the dead in the city morgue after his killing spree at the Blackwell hotel and goes after a group of medical students who fight to survive."

So, it's your basic 'resurrected serial killer' scenario, but perhaps the Soska sisters can work their magic on it; the screenplay is being written by Nathan Brookes and Bobby Lee Darby.