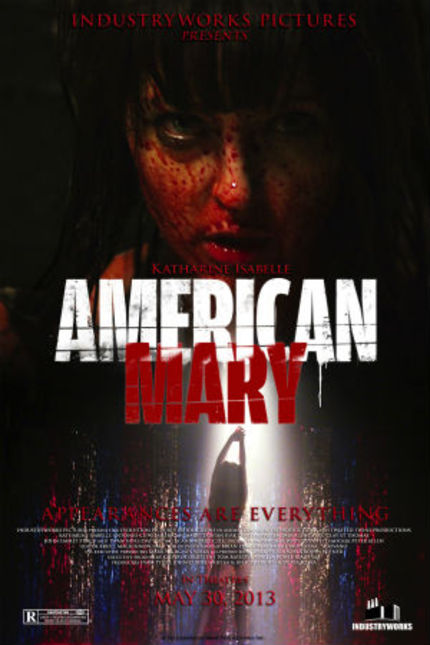 The ever-growing cult of fans devoted to Jen and Sylvia Soska (aka "Twisted Twins") will not be disappointed by American Mary.

Their previous effort, 2009's ultra low-budget grind house effort Dead Hooker in a Trunk, received a decent amount of attention for the identical wonder-duo from their fans, who have been curious and eager to see what the women could come up with when given the kind of creative leeway that an actual budget can provide.

A devoted student whose life revolves around practicing sutures on willing poultry patients in her kitchen, taking heat from harsh professors, and chatting with her Hungarian nana when she can, Mary comes across as both fiercely intelligent and ambitious, yet emotionally reserved. Isabelle does a fine job of establishing Mary as a wholly believable character, one whose flaws are measured against enough idiosyncratic mannerisms to effectively humanize her. Further still, Miss Isabelle injects just the right amount of humor and sarcasm into select turns of phrase, a welcome layer of endearing levity for a character who could easily be construed as "chilly." Mary presents differently to different people in different situations, as we all do, thereby enforcing a subtle yet utterly critical underlying tone of vulnerability. While we recognize her strengths, we also recognize her weaknesses.

As a financially struggling student, Mary's initial challenge is one that many can relate to. Her desperate ambition is put on full display during an unlikely (exotic) dance audition for club owner Billy (Antonio Cupo), who offers her a sweet sum for a one-off, under-the-table surgical gig instead. Word quickly spreads in underground circles about Mary's skill with a scalpel, and despite some initial reluctance, she takes on a client looking for something far more surgically extreme than anything she would ever come across in school.

After Mary's academic life is permanently disrupted in a horrifying turn of events, she drops out, her path indelibly altered. It is at this point that Mary blossoms into another creature entirely, fully immersed in the strangely seductive and lucrative world of extreme body modification. For the right price, she is a skilled (albeit unlicensed) practitioner, willing to surgically transform her clientele's physiques into the physical manifestation of their dreams. Ultimately, it is Mary who transforms from woe-begotten student to powerful High Priestess, embraced by a community whose unusual flesh-fetish is scorned by the mainstream establishment.

The weird, strange, and often disturbing world of the film's body-mod setting is brought to life by special effects wizard Todd Masters, best known for his work on television shows like True Blood and Fringe, as well as films like Slither. Remarkably, the movie contains no computer generated imagery, relying entirely on the old-school use of prosthetics and special make-up for characters ranging from the totally unconventional (silicone forehead horns) to cringe-worthy, Real Housewives-esque plastic surgery "victims." Oddly, it is the characters in the latter category who are the most compelling and disturbing to behold, especially when viewed through Brian Pearson's appropriately moody lens.

Supporting characters Beatress (Tristan Risk) and Ruby (Paula Lindberg), two of Mary's sweet and endearing clients, sport ghastly plastic faces that are extreme enough to be both tragic and satiric. Somewhere between grimacing over Beatress' botched (in an attempt to resemble Betty Boop) face and a darkly comic nod to the experimental legacy of Dr. Mengele (featuring Jen and Sylvia in a cameo role), the Soskas offer up a social statement about the potentially disastrous modern perception and preoccupation with physical beauty. Weirdly compelling, interesting, dryly amusing yet never mean-spirited, American Mary quietly contains a totally unexpected yet thoughtful commentary that surfaces as a profound, resounding element within the framework of the film.

Like its protagonist, American Mary is not perfect, and my interest did wane at the start of the third act when the question of a possible romantic entanglement arose, a development that did little to enhance Mary's character progression and the overall story. I found myself longing instead for more time with the strange pursuits of the odd yet likable characters who built such great momentum in the first and second acts. Isabelle does a formidable job of establishing Mary as a believable, complex character in an unusual situational arc; the film would have been better served if her inherent psychological conflict was fleshed out (no pun intended) more fully than it was. As a result, the conclusion felt rushed and muddled, leaving me somewhat confused during the climactic final scenes.

American Mary is certainly not the kind of garden variety, over-the-top, white-knuckle, cheap-thrill bloody gore-fest that some audiences may be expecting due to its unusual subject matter. Rather, the Soskas have crafted an experience that is thoughtfully restrained and refreshingly nuanced enough to leave them thinking, instead.

Review originally published in different form during FrightFest in August 2012. American Mary screens at select Cineplex locations tonight (Thursday, May 30), followed by a wider release on Friday, May 31 at select theatres in Canada. Check local listings or visit the official site for more information.