Review: THE BUTLER Has Admirable Intentions But Weak Execution 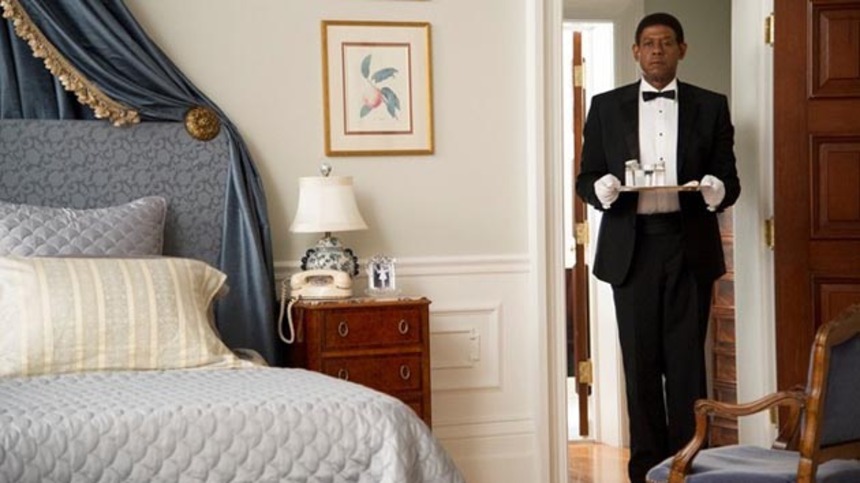 What The Butler tries to accomplish is so noble and ambitious that it almost doesn't matter how clumsily maudlin it ends up being, how over-earnest and sanctimonious it can be. It's heartening that movies on this subject are being made at all; why worry about whether they're, you know, good?

Well, because that's what we do, that's why. The intention of the film (which MPAA arbitration has ruled must be titled Lee Daniels' The Butler) is to cover the Civil Rights movement from a unique perspective: through the eyes of a black man who was a White House butler from Eisenhower to Reagan.

That's an enormous undertaking for one movie. Almost every character could be the subject of his or her own biopic -- never mind the hugeness of the task of addressing shifting American attitudes on race from the '50s to the '80s. Even limiting it to the perspective of one man at the top (or adjacent to the top, bringing tea and sandwiches to the top), there's still an extraordinary amount of material to cover. It's like an entire graduate course condensed into one lecture for freshmen.

A heavily fictionalized account of a true story (the real man's name was Eugene Allen), The Butler stars Forest Whitaker as Cecil Gaines, an uneducated son of Georgia sharecroppers who's promoted from "field n*****" to "house n*****" in the 1920s and trained in the service arts. He makes his way to a luxury hotel in Washington D.C., and from there to a job at the White House. At some point he marries Gloria (Oprah Winfrey), a supportive woman who swells with pride to have a husband in the White House but is lonely at home without him. They have two sons.

It is drilled into Cecil's head that servants must be discreet and apolitical. No matter what's happening when you bring the president his coffee, you hear nothing, see nothing, and reveal nothing. The presidents and their advisers are used to thinking of the staff as invisible, and they openly discuss sensitive issues in front of Cecil. Occasionally, though rarely, they ask for his thoughts, along the lines of "Why, here's a black man right here! Let's see what he thinks!"

Eisenhower (Robin Williams) struggles over whether to send troops to Little Rock, while his vice president, Nixon (John Cusack), goes campaigning for the black vote in the White House kitchen. JFK (James Marsden) worries about the safety of the Freedom Riders, who include Cecil's son, Louis (David Oyelowo), a strident young man who considers his father a sell-out. Reagan (Alan Rickman) is unsure what to do about apartheid in South Africa. (Like most of us, the movie skips Ford and Carter entirely.)

The film, ambitious in scope but stumbling in execution, was written by Danny Strong, an actor (he played one of the three nerd villains on Buffy the Vampire Slayer) who has recently made a career writing political TV-movie screenplays: Recount, about the 2000 election, and Game Change, starring Julianne Moore as Sarah Palin. The Butler is more complex and sprawling than those, and has a lot more riding on it. Millions of people have a personal connection to the Civil Rights movement. Honor must be paid.

But somewhere between Strong's functional yet mawkish dialogue and Daniels' adamantly respectable directorial style (at least he's toned it down from The Paperboy!), the movie is less than the sum of its parts. Collapsing years' worth of events into a short amount of time makes the story feel like nothing more than a series of occasions where Cecil happened to be in the Oval Office when the president was having his most important conversations about racial equality. Cecil is always there to overhear and dutifully refrain from reacting. He's more a witness to history than an actor in it, and stories about non-participants aren't nearly as interesting as stories about participants. (If only we'd followed his Freedom Rider son instead!)

Eugene Allen's honor as a butler probably prevented him from telling his juiciest stories, and even under the artistic license afforded by cinema, Daniels and Strong aren't interested in gossip. Nor, unfortunately, do they care much about character. None of the presidents gets enough screen time to reveal anything about the man. Instead of insight we get vignettes that range from tepid to mildly poignant: Cecil standing by as LBJ (Liev Schreiber) tries to poop at one end of the spectrum; Cecil comforting a blood-spattered Jackie Kennedy (Minka Kelly) at the other.

Whitaker is fine as Cecil, giving him more substance than the lukewarm writing would seem to call for. Cuba Gooding Jr. and Lenny Kravitz appear as two of Cecil's co-workers, with Terrence Howard as the Gaineses' good-for-nothing next-door neighbor. Oprah Winfrey, appearing onscreen as someone other than herself for the first time in 15 years (Beloved), acquits herself with dignity, even though there isn't much for Gloria to do in the story.

There isn't much for anyone to do in the story. That's the problem. We see a series of events that really happened (more or less), but seeing them is all we do. We don't feel them, or get a sense of how they personally relate to our main character, even though we know they do. A man who worked with seven presidents during such a tumultuous time in history probably had some marvelous stories to tell. Too bad The Butler doesn't tell them.

The Butler hits US theaters from The Weinstein Company on August 16.