Review: I DECLARE WAR, Kids Battling Kids Is Both Nostalgic And Revealing 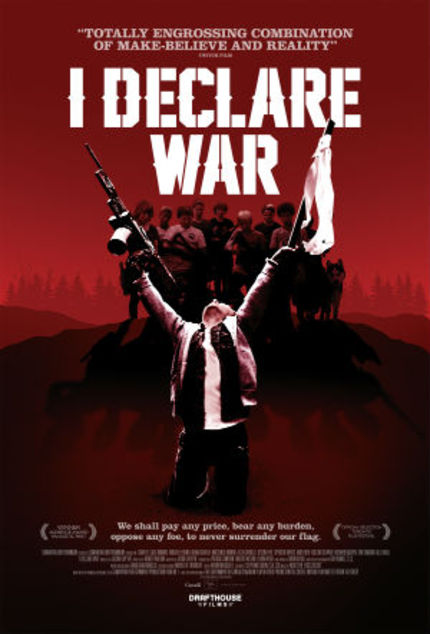 One weekend day a number of the nerdier kids from the local middle school gather their sticks and twine and balloons filled with red dye, and head into the local woods to play capture-the-flag. Oh, those tweens today with their Bieber hair-cuts and their war games.

While we are never given any visual context of this one-day war, it is implied that these games have been going on for some time and someone is keeping statistics. Jason Lapeyre's odyssey of two groups of children battling in the forest -- no this ain't The Hunger Games, more like a leafy, agora-version The Stanford Prison Experiment -- is a peculiar but totally engrossing combination of make-believe and reality. At that age friendships seem like everything, and everything takes on air of importance and intensity.

The film often shows real guns and grenades (and explosions), even if the kids are just using whatever sticks and hobby kit items they happen to have crafted into weapons. Make no mistake, however, the kids take their game very seriously; there are rules (handily communicated in the animated opening credits, so as to not belabour the exposition) and things are played with strategy and a chain of command. I Declare War delights in juxtaposing war-film cliches with a real ear for 12-year-old banter. Its war sequences are a combination of thrilling battles and humorous, knowing nods, certainly for those who grew up in the 1970s, but probably for anyone who grew up with a creek behind their house.

Nobody takes the war more seriously than P.K. Sullivan (Gage Munroe, with his afore-mentioned Beiber do), who fancies himself General George S. Patton; albeit he is young enough that loyalty is not valued as much as a collection of soldiers to throw under the bus for whatever plan he has to win at all costs. Nevertheless, as the alpha-male of his team, he remains in charge.

The other team, headed up by equally blonde Quinn, has some leadership issues, as well as the only girl in the game, which adds some pre-teen sexual tension to the equation. Mackenzie Munroe, who looks like a very young Emma Stone, is really quite magnificent and has real screen presence (some of the other supporting kid actors are a bit more dodgy in their acting), sporting a brain and a crossbow and A-cups (and is not afraid to use either or all of them.)

Let us be clear, while this film wears the clothing of war and adventure in the woods, it is equally interested in being a crucible for all of the kids to work out their issues and anxieties while waiting for the next battle. War is 10% violence and 90% waiting, so there are plenty of opportunities to talk about religion, philosophy (albeit at a youth level) or perhaps what species of dog would you allow to give you a blow-job if you were rewarded with riches and fame. Yes, these 12-year-old kids drop F-bombs often, and when provoked can be total assholes to each other.

A subject such as bullying is far better handled, as I see it, in a fictional narrative form than as a doc (as in, say 2012′s Bully) and I Declare War certainly covers several (if not all) angles of bullying, making the entertaining movie perhaps one of the definitive voices on the subject. It further postulates that bad leadership is the worst kind of bullying, and that is something which is as applicable to the adult world as it is to the tween-set.

Review originally published in slightly different form during Action Fest in April 2012. The film opens on Friday, August 30, in limited theatrical release in the U.S. via Drafthouse Films. It's also available to watch via various Video On Demand platforms.