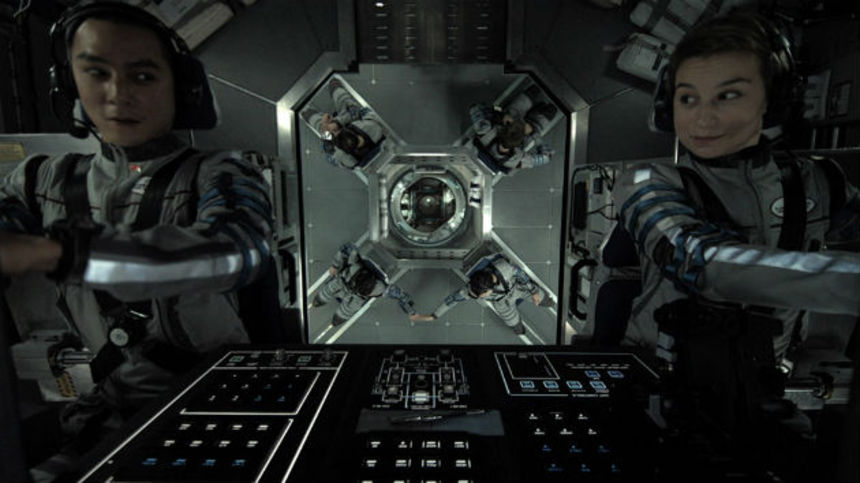 Ecuadorian filmmaker Sebastián Cordero has a handful of titles on his directing resume, the best known probably 2004's John Leguizamo-starring non-comic journalist drama Cronicas. All of his films have been in Spanish and none venturing into what we would commonly call "genre cinema." Therefore, the decision to hire Cordero for what has repeatedly been referred to as a "hard sci-fi" project may seem a bit out of left field.

The decision, as it turns out, was a wise one. Cordero brings a well-tuned human element to this space exploration drama that succeeds on the strength of the performances and interactions between characters. Though the storytelling gets more than a bit mushy in the editing room, ultimately Europa Report gets it right and provides a very enjoyable sci-fi ride.

Part found-footage, part docu-fiction, Europa Report is filmed exclusively from stationary cameras. Though it leads to a form of storytelling that borders on cliché, Cordero uses it well and the method proves efficient for pulling off complex visual effects that bring a healthy realism to this relatively low-budget picture. The filmmakers purport to have worked in close conjunction with NASA, JPL, and SpaceX to get the science part of the equation correct, and though there are a couple of head-scratching moments, the believability factor generally passes the sniff test. The zero-gravity is also done particularly well. This is especially refreshing to see after so many spacers have let this ball drop.

The story follows the six-person crew of Europa One on its mission to touch down on Jupiter's moon Europa. Recent findings (reported in the film, from 2011) suggest there may be life in the oceans deep below the moon's icy surface. As you might expect, not everything goes as planned, most notably the ship's complete loss of communication with Earth inside the first year of the half-decade journey. What else goes wrong isn't entirely clear, mostly because of the narrative trickery employed to withhold information from the audience. This is really the only misstep in the movie, as the filmmakers never quite succeed in making it seem necessary to the story. The film could have been told sequentially and been just as effective.

The real strength of the film comes in the performances by each member of the six-person crew -- and in particular their realistic interactions with each other. Though without A-list movie stars, the film is filled with recognizable faces. Sharlto Copley (District 9) plays the junior engineer and his interaction with his gruff Russian chief, played by Michael Nyqvist (The Girl with the Dragon Tattoo), feels very authentic. Chinese-American actor Daniel Wu (The Banquet) gives a good turn as the ship's commander. The film is notably a co-production with China, and Wu's inclusion in the cast is a likely nod to that country's enormous audience, his tiny Chinese flag lapel pin another.

While certainly not without its flaws, when the story starts to click into place, a genuine sense of satisfaction does as well. There are many genuinely tense moments, but the film does little more than dip its toe into horror territory, a fact that will be refreshing to sci-fi fans who are tired of seeing their favorite genre co-opted for more box office friendly directions. Ultimately, the film gets far more right than wrong and with the strength of acting and Cordero's work at the helm, Europa Report becomes quite the entertaining journey.

Review originally published during the Los Angeles Film Festival in June 2013. Europa Report is now available to watch via various Video On Demand platforms. It will open in theaters in New York, Los Angeles, and Washington D.C. on Friday, August 2, and will expand to other cities in the U.S. in the following weeks. Visit the official site for playdates and theaters.