Review: CUTIE AND THE BOXER Iterates Love Is A Battlefield

Dustin Chang
Lead Critic; Brooklyn, New York (@floatingartist)
Tweet Post Submit
In Cutie and the Boxer, an intimate documentary by Zachary Heinzerling, we are introduced to the Shinoharas -- Ushio and Noriko, both Japanese transplants/New York based artists, in their habitat, contemplating about the massive unpaid bills. "How much?" Ushio asks. "You don't wanna know. It's too high to even think about!" Noriko answers. They are the cutest elderly couple you'll ever see. Not only the film is a great documentary about struggling New York artists, but it's also the best love story playing in theaters this summer.

The film starts with the couple getting up in their  squalid, cramped loft in DUMBO (Down Under Manhattan Bridge Overpass) neighborhood, Brooklyn. Noriko braids her salt and peppery hair into her signature pigtails, does groceries, makes breakfast and takes care of the bills while Ushio slowly wakes up. She also takes care of business dealings and arranges his gallery shows. The loft is filled to the brim with  Ushio's idiosyncratic, brightly-colored paintings and sculptures. It is quite clear who takes the artist role and and who plays the supporting role in this household. 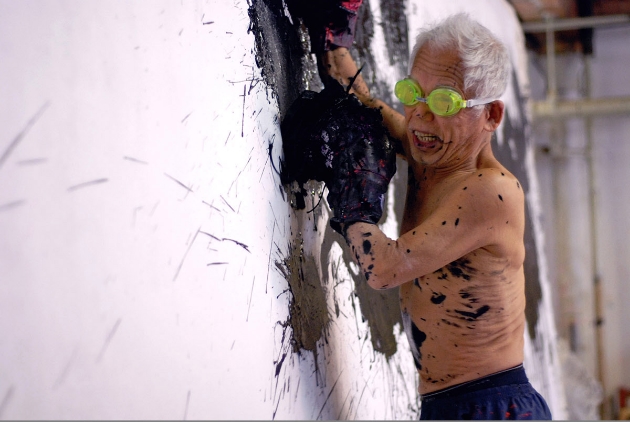 Armed with home videos and photos, the doc shows Ushio Shinohara's rocky career as a visual artist. One of the founding members of the Neo-Dadaism movement in the 60s and known for his action paintings (he punches the canvas wearing goggles and boxing gloves with paint sponges strapped on), Ushio came to New York in 1969 and never left. There he hung out with other pop-influenced artists such as Andy Warhol in Greenwich Village, in an era that many romanticize as the golden age of the New York art scene. Seen as important but not commercially viable, Ushio's work didn't really have financial successes. Even his innate optimism and boundless energy sometimes weren't enough to overcome the hardships of being poor. He started drinking heavily. And it was Noriko, an art student and 23 years his junior, who stuck with him and supported him all those years. 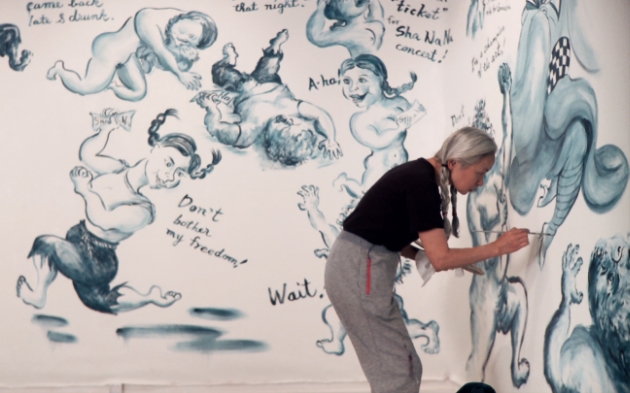 Then, there is Noriko the artist. Her cartoonish figurative drawings, paintings and accompanying narrative are very much derived from her own life, especially the relationship with Ushio. In the beautiful flash animation sequences, Noriko's alter ego, a pigtailed, forever naked 'Cutie' goes through life's hardships and happiness with 'Bullie' (bull is 'ushi' in Japanese), her boorish artist husband. Asserting herself late as an artist in the Shinohara household, she has her own 'queendom' -- a small space in the loft where she sketches and writes and where Ushio isn't welcome.

It all culminates in their exhibition together in 2010 titled (Love is) Roarrr! in a New York art gallery.

Heinzerling gets complete access to the life of the Shinoharas and the result is an amazingly tender, intimate and realistic portrait of a relationship between two artists that is built on respect, understanding, and most of all, love.


Cutie and the Boxer will open in New York (and Los Angeles) on Friday, August 16 at the Lincoln Plaza Cinema and Landmark Sunshine Cinema. A national rollout will follow.


Dustin Chang is a freelance writer. His musings and opinions of the world can be found at www.dustinchang.com
Tweet Post Submit

More about Cutie and the Boxer