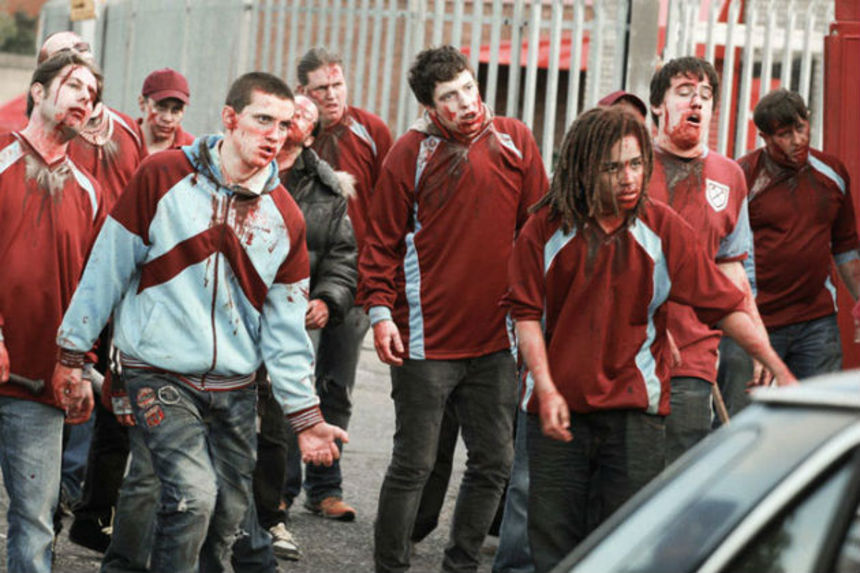 After the critical and commercial success of his big screen debut, Severance, it comes as no surprise that screenwriter James Moran would continue to introduce East London geezers into recognisable horror movie settings.

Cockneys Vs. Zombies, however, proves as over-reliant on its high concept premise as its title might suggest, bringing precious little of note to either the urban crime film or shuffling undead sub-genre. Sadly, the film also fails to escape the intimidating shadow cast over British horror comedies by Edgar Wright's vastly superior - but not altogether dissimilar - Shaun Of The Dead.

Cockneys Vs. Zombies follows the plight of an East End retirement home, targeted for demolition to make way for an upmarket apartment complex. Among the residents is Ray Maguire (Alan Ford), war veteran, thoroughbred cockney and grandfather to orphaned twins and local chancers, Andy and Tony. Ray does his best to keep the boys on the straight and narrow, but with the home under threat, Andy and Tony see only one solution: rob a bank so they can buy it back and keep grandpa and his gang of geriatric cronies safe and warm.

As luck would have it, Andy and Tony's feisty cousin Katie (Michelle Ryan) has a talent for picking locks and safe-cracking, so she tags along with the boys, who enlist the help of a psychopathic war veteran with a metal plate in his head and an obligatory dim-witted sidekick. Little do they know that construction workers have accidentally exposed a bubonic plague-era mass grave, unleashing a horde of brain-munching zombies on the local community.

The problem at the centre of Cockneys Vs. Zombies is not that the dead are walking the streets of London, but that scriptwriters James Moran and Lucas Roche don't know what to do about it. After establishing two mismatched groups of unlikely heroes, the script bends over backwards to bring them together for an obvious third act climax of indomitable pensioners squaring off against the zombies. With Ford flanked by such delightful screen veterans as Honor Blackman, Dudley Sutton and Richard Briers, the anticipation is palpable, while the pay-off proves monumentally anticlimactic.

Before this, however, we must endure numerous contrived misadventures as our robbers fight alongside bank staff and customers to survive, which of course not all of them manage. Most disappointingly, it is all the best characters that get killed off, while the young, bland and not all that attractive ones make it through to the big finale. What I wouldn't give to see a version of this film that ends with Ashley "Bashy" Thomas and Alan Ford fighting side by side against an approaching legion of rotting flesh munchers, but sadly Moran, Roche and director Matthias Hoene have other, less demanding aspirations.

Where Edgar Wright's film created a string of smart, funny and imaginative sequences in which his assorted collection of ordinary people encounter and defeat the zombies, Hoene's film never displays the same level of wit and quickly becomes repetitive. Characters move to a new location, start bickering, get interrupted by zombies, at which point a character cocks his/her weapon, exclaiming some variation of "Get out of the East End you zombie muppet!" Cue a horror-themed indie rock/ska track on the soundtrack as the gang makes its escape. Once they get a break, the formula repeats itself - again and again, with no possible escape in sight.

Sadly, much of the film's talented cast goes to waste. The aforementioned Bashy cuts an imposing figure as the film's true "crim", but is never given the chance to seize control of the film, likewise Jack Doolan's simpleton barely gets a look-in thanks to the screen-hogging trio of Michelle Ryan, Harry Treadaway and Rasmus Hardiker. Not that they do a bad job - all three of them are likeable enough - their characters are just incredibly bland and uninteresting.

Alan Ford, best known for his roles in An American Werewolf in London and Snatch, need only open his mouth for the chimes of Bow bells to ring out across London town. He is clearly the best thing in Cockneys Vs. Zombies, and everybody knows it. The film all but grinds to a halt whenever he speaks, as if in awestruck reverence of this icon to screen geezers. Hell, he even gets to cop off with a former Bond girl!

But it says something about the priorities of the film on display, when Ford gets to upstage an actor of Richard Briers' pedigree. Briers does get a couple of fantastic moments, but there's no getting round the fact that Cockneys Vs. Zombies is brainless, knockabout entertainment that aspires to be nothing more. No doubt this will be used as the filmmakers' line of defence, but that's kind of what makes it so disappointing. With a little more effort and ambition, Cockneys Vs. Zombies could have been so much more than the simple premise its title presents, rather than delivering on its promise with such tight-fisted accuracy.

Review originally published during FrightFest in August 2012. Cockneys Vs. Zombies opens in select cities in the U.S. on Friday, August 2. It will also be available to watch via various Video On Demand platforms on the same day. Visit the official site for more information.