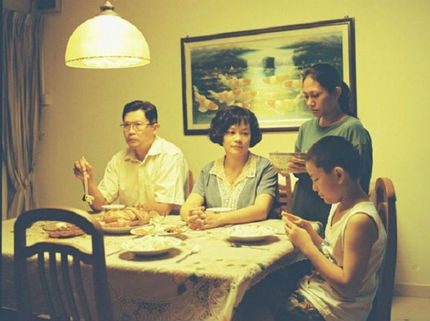 Ilo Ilo is the debut feature from Singaporean director Anthony Chen, who is now based in London. It is, however, handled with such a deft hand and filled with so much obsessive detail that one would be forgiven for thinking Chen has been directing for many years.

The setting is Singapore in 1997, with the Asian financial crisis looming like the monsoon clouds over the city. A family caught up in this inevitable storm have just hired an inexpensive Filipino maid; a common staple of society then and even today.

The mother, Hwee Leng (Yann Yann Yeo), treats the maid with disdain but recognises her important function in the household. She must carry on with her demanding day job as an administrative clerk for a company that is laying off staff daily. The father, however, has just recently been fired and is hiding this, taking minimum wage jobs secretly and developing a nasty habit. Finally, the son, Jiale, proves to be the biggest troublemaker, causing fights in school and constantly disobeying his parents, who are in too much of an emotional deluge to do anything seriously about it.

The maid they hire is Teresa, who is from the province of Ilo Ilo in the Philippines. This fact is not stated, but it certainly explains the film's title. She is running away from responsibility at home, but takes her job seriously, despite the constant bullying from Jiale.

Ilo Ilo is a semi-autobiographical tale, based on a time of crisis in Chen's life. As a child in this period, his father also lost his job, additionally his family also hired a maid who was called Teresa. His personal feelings and reflections are portrayed beautifully in the film, and there is a genuine sense of time and place that is difficult to recreate, although he has done so masterfully.

It is 1997 and the fashion, textures, building interiors and exteriors, music, technology and ideology are all pitch-perfect. Better still, Ilo Ilo never feels like a melancholic look into the past, and with the aid of French cinematographer Benoit Soler, Chen has ensured his history remains intact. Soler, in fact, does not romanticize or re-contextualize anything, and the film always feels uniquely Singaporean and looks like an amazing time piece.

Chen's obsession to detail and story is inherent in every frame, from the excellent acting he gets from the cast to the smallest details, like lottery cards and Tamagotchi toys. These feel like part of the mundane everyday, and it is easy to see how personal this film was for Chen, as he never embellishes or dramatizes anything.

The plight of the family also works as a metaphor for the great financial crisis of the time. They are all scammed by the system and by greedy opportunists. They are surrounded by lingering death and awful stories of corruption and punishment. In the household itself, they have pet chicks that grow, only to be eaten and one by one the pen dwindles.

Despite all this, Chen wrangles the story back to this fascinating, unhinged family. Truly a wonderful new voice from Singapore, Ilo Ilo is a modern masterpiece. Chen's win of the prestigious Camera D'or will hopefully open up the doors for more great talent from this interesting place.


Ilo Ilo screened at the 2013 Melbourne International Film Festival. For more of my MIFF coverage, see ScreenAnarchy's MIFF landing page. I also greatly enjoyed A Hijacking, which played at the festival this week, and was reviewed by Todd Brown here.

Do you feel this content is inappropriate or infringes upon your rights? Click here to report it, or see our DMCA policy.
Anthony ChenDramaMIFF 2013SingaporeYann Yann YeoTian Wen ChenAngeli BayaniJia Ler Koh