Fantasia 2013 Review: I'LL GIVE IT MY ALL...TOMORROW Is A Charming Tale About Failing To Succeed. 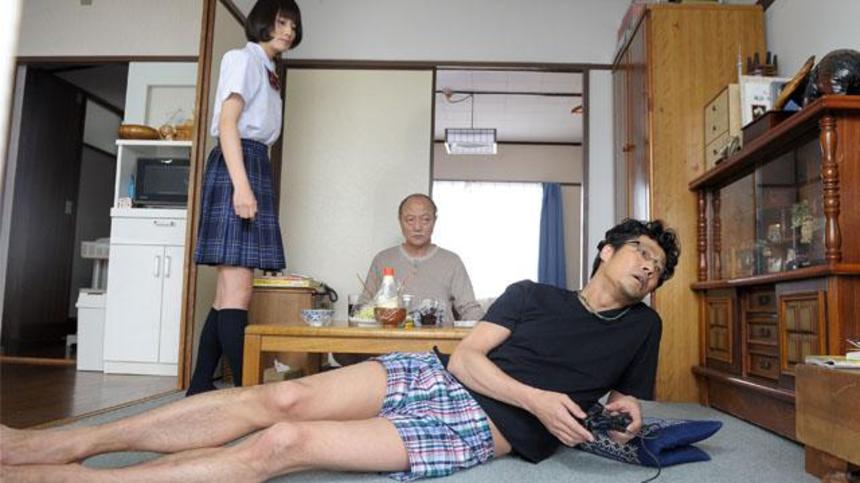 No one wants to watch the hours, days and years of their life swirl down the drain. The dream is to look back and say "Yes, I have made the right choices, I have worked hard to achieve my goals, and I have WON AT LIFE!"

Shizuo (Tsutsumi Shinichi) is a 40 year old office worker who quits his jobs to follow his dreams. Problem is, he has no idea what those dreams are supposed to be. Out of nowhere, he decides that his life should be dedicated to being a manga artist. He can draw! He has ideas! All he has to do is put them to paper! That should be easy! Shizuo quickly discovers that drawing manga is a lot of work. It's easier to lounge in front of the TV and play video games all day. The world isn't impressed by his attempts to make something of himself. He's mocked by his father at every turn, pitied by his daughter, and treated with befuddlement by his best friend. Shizuo knows he has to get his life in order in order to succeed, but why does it have to be so hard?

It would have been easy to make I'll Give It All an inspirational story about bucking the odds and climbing to the top. The protagonist could struggle for the bulk of the running time, have an epiphany, and finally succeed before the credits roll. Thankfully, writer/director Fukuda Yuichi, adapting a manga by Aono Shunjo, never gives the audience the easy way out. Shizuo's goals are admirable, but demand a level of dedication he simply can't generate. The result is a story that isn't about fighting to succeed, but dealing with the fact that getting work done is really, really hard.

I'll Give It My All rests comfortably on the capable shoulders of Tsutsumi as Shizuo. The actor strikes the perfect charismatic balance between hopeless slacker and oblivious full of crap blow hard. He imbues the character of Shizuo with enough clueless bravado that it becomes increasingly amusing to watch him attempt to get ahead in the world. We can empathize with his struggles to get work done, but still laugh when his boasting gets him in trouble with someone half his age. Director Fukuda keeps things light and he lets the jokes rise from the characters. The cast of personalities that surround Shizuo, from his angry father to his baffled best friend, give things a much needed perspective. They have their own wants and needs beyond Shizuo's which adds emotional weight to the proceedings. The film is a little long at two hours, but it's pleasant comedic stroll. Shizuo may come off like a lazy fool, but the audience wants to see him succeed. It's just so darn hard to get things done.

I'll Give It My All is a simple, and consistently amusing, slice of life comedy about a slacker's halfhearted attempt at making something of of himself. It will never give you the answers to winning at life, but you will find some victories, some smiles and a whole lot of failure, and isn't that all we really need sometimes?

Do you feel this content is inappropriate or infringes upon your rights? Click here to report it, or see our DMCA policy.
comedyfukuda yuichiI'll give it my all tomorrowjapanmanga

More about I'll Give It My All Tomorrow