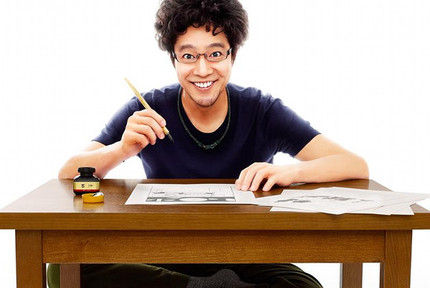 Japanese writer-director Fukuda Yuichi is having what may be termed 'quite a year'. A super prolific talent, Fukuda has been present on the big screen in the past - directing part of an anthology project as well as a feature comedy based on his own play in 2009 - but it is television where he has really made his mark with writing credits on a whopping 82 episodes of various television series since 2010 alone, a great many of which he has also directed.

Shizuo is a no-good 40 year old single father living with his high school daughter and his father. One day he suddenly decides to quit his stable job in order to become a comic (manga) writer. He starts presenting his works to a comic magazine publisher. After piles of rejections, the eccentric middle-aged Shizuo starts to lose confidence of ever getting his work published, however with the support of his daughter and close friends, he finally starts to see the light of success...

Do you feel this content is inappropriate or infringes upon your rights? Click here to report it, or see our DMCA policy.
comedyfukuda yuichihentai kamenI'll give it my all tomorrowjapankid's policemanga

More about I'll Give It My All Tomorrow