There's a cliché that they don't make movies like they used to, with the implication that they're just not as good as they used to be. Sure, with the advent of CGI, epic films have gone by the wayside, but modern film production techniques can be a pretty amazing thing when set to capture practical imagery on a grand scale.

Jerry Bruckheimer is the D.W. Griffith of the modern era, at least in one specific way. This producer, more than any other, has kept "big Hollywood" afloat, his megaproductions costing hundreds of millions of dollars, only to generate billions for the studios. Bruckheimer-produced films thrive on the big screen; they're often big and loud, and a hell of a lot of fun. Certainly, sequels to popular franchises have diluted things a bit, but those who were skeptical about the sheer madness of taking a theme park ride -- and a maligned film genre -- and creating one of the great action movies has to applaud his gumption.

If a pirate movie was bound to be box office poison, only to prove to be an absolute juggernaut, it's useful to apply the same cautious optimism to another genre that seems to have fallen by the wayside. For in no uncertain terms, Disney's The Lone Ranger is one of the biggest, most epic Westerns ever filmed. Running a chunk more than two hours, it's a stunningly-shot homage to classic Western films, echoing Johns Ford and Sturges, with sweeping shots of the American Southwest that are often the equal of the classics the film references. The director and star from the first Pirates films are back, and Gore Verbinski and Johnny Depp, who also worked on the acclaimed CGI Western Rango, appear to be completely in their element.
There will be much virtual ink spilled on the tonality of the film, and the way that it deals with the very real issues of having an ostensibly Caucasian Hollywood star take on the role of Tonto. The challenges raised by a superstar playing the character in "redface" are buttressed by a studio keen to point out Depp's formal adoption by the Cherokee tribe, as well as Depp's own claims of Aboriginal roots. A debate about whether a non-Native can take on the role without immediately underscoring the atrocious portrayal that Hollywood made for years concerning Aboriginal representation on screen is an important one to have. At least superficially, however, the film goes to great lengths to undermine the traditional Western myths -- here Tonto is actually the motivating factor of much of the plot, with the Ranger becoming almost his sidekick. People will certainly debate about whether this twist is sufficient, or whether this property is indelibly linked to a servile and subservient view of Native representation.

With certain caveats, I think the film does a decent job for the perceptive viewer of addressing those very elements. The traditional Western "good guys" (the expansionist pioneers) are shown to be twisted and avaricious, yet the Natives aren't seen to be overtly stoic or mystically noble. The framing device of the film takes the notion of the "Noble Savage" on directly, and for such a broad and audience-friendly film, it's relatively sophisticated in the themes and deep-seeded archetypes that it's drawing upon. The fact that the filmmakers have managed to do so within the original rubric of the Lone Ranger story is compelling enough, even if it merits further debate about whether or not we need this property revivified at all, given its troubled history for many in the Native community. 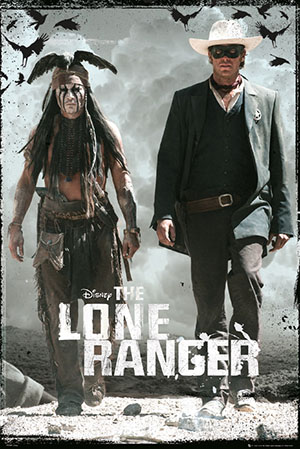 Still, worldwide there remains a Cowboys vs. Indians motif that runs deep, and the film trades upon this iconography with deftness. Setting the other issues aside, the horseplay of our leads is buttressed through exceptional equine sequences. Big set pieces include elements that harken back to another film, Indiana Jones and the Temple of Doom (a work that itself has problematic elements with another group of people dubbed "Indian"). Taking the epic mine chase sequence from the earlier film up several notches by using full-sized trains, this majestic and insane action-gasm is the culmination of the film's epic grandeur. Along the way we get other moments that are more grounded in reality, but they too play out with a scope that's often exhilarating.

With a film that has plenty of social criticism and post-modernist deconstruction of The Lone Ranger ethos, we're nonetheless left with what proves to be a hell of a good time at the movies. Explosions, horse chases, gun battles and whip-snap dialogue are peppered throughout. If Depp's lunatic Tonto is both broad and decidedly captivating, Armie Hammer's Ranger character manages to be equally nuanced and multi-dimensional. From a stylistic point of view, Verbinski and his crew have made for a delightfully dusty picture; there's a filth and griminess that's absolutely intoxicating, reminiscent of the works of Sergio Leone, only with a budget some 100 fold above what the Italian filmmaker would have been allocated that allows for even more astute continuity of muck.

Depp's costume, with the morbid bird perched atop his head, is certainly a bold character choice, but it's one that very much works within the context of this imagining. As for the framing device, the old-age makeup is still a bit hard to take, but it's done with relative effectiveness, and it does a decent, if potentially redundant, job of providing a kind of chorus for less perceptive viewers lost in the film's jumps in logic.

It's impossible for me to say what kind of box office success this film will have, and it's equally easy to get trapped into concerns about budget allocation and other such meta-film concerns. For me, such repulsively huge budget allocations can in the right hands create the kind of delightfully massive event film-making that too often is simply a slurry of CGI comic book heroes slogging other pixels. I admit wholeheartedly to be a sucker for the sweeping grandeur that film can provide, and while this work has its fair share of computer graphic elements, it is at its core a wonderful throwback to a style of filmmaking that helped build Hollywood.

Owing as much to the aesthetic of Deadwood as it does to The Searchers, I think The Lone Ranger can be seen as a wickedly surreptitious film, sneaking into a giant Hollywood production very real questions about the representation of American history, and toying with audience expectations by turning these core myths on their head. The fact that such elements can be hinted at while still creating a child friendly, intensely amusing action film makes it all the more remarkable.

At its core, this is a film that's a heck of a lot of fun to see, with guns a blazin' and horses charging to the tune of the William Tell Overture. This may not have been a film we were clamoring for, and its baggage may for some weigh it down so much that it can't be enjoyed for what it is. I'd argue that this is a film the equal of the first Pirates film from a spectacle point of view, but with the added benefit of being slightly more cerebral. It is a film that's equally respectful to the genre conventions and merciless in the way it skewers some of our expectations.
What is not debatable is that a film of the scope that The Lone Ranger provides demands to be seen on the biggest screen possible, a reminder of when films were more than playthings on backlit screens, but could open up the vistas of Monument Valley in monumental ways.

Do you feel this content is inappropriate or infringes upon your rights? Click here to report it, or see our DMCA policy.
Armie HammerGore VerbinskiJerry BruckheimerJohnny DeppLone RangerWesterns